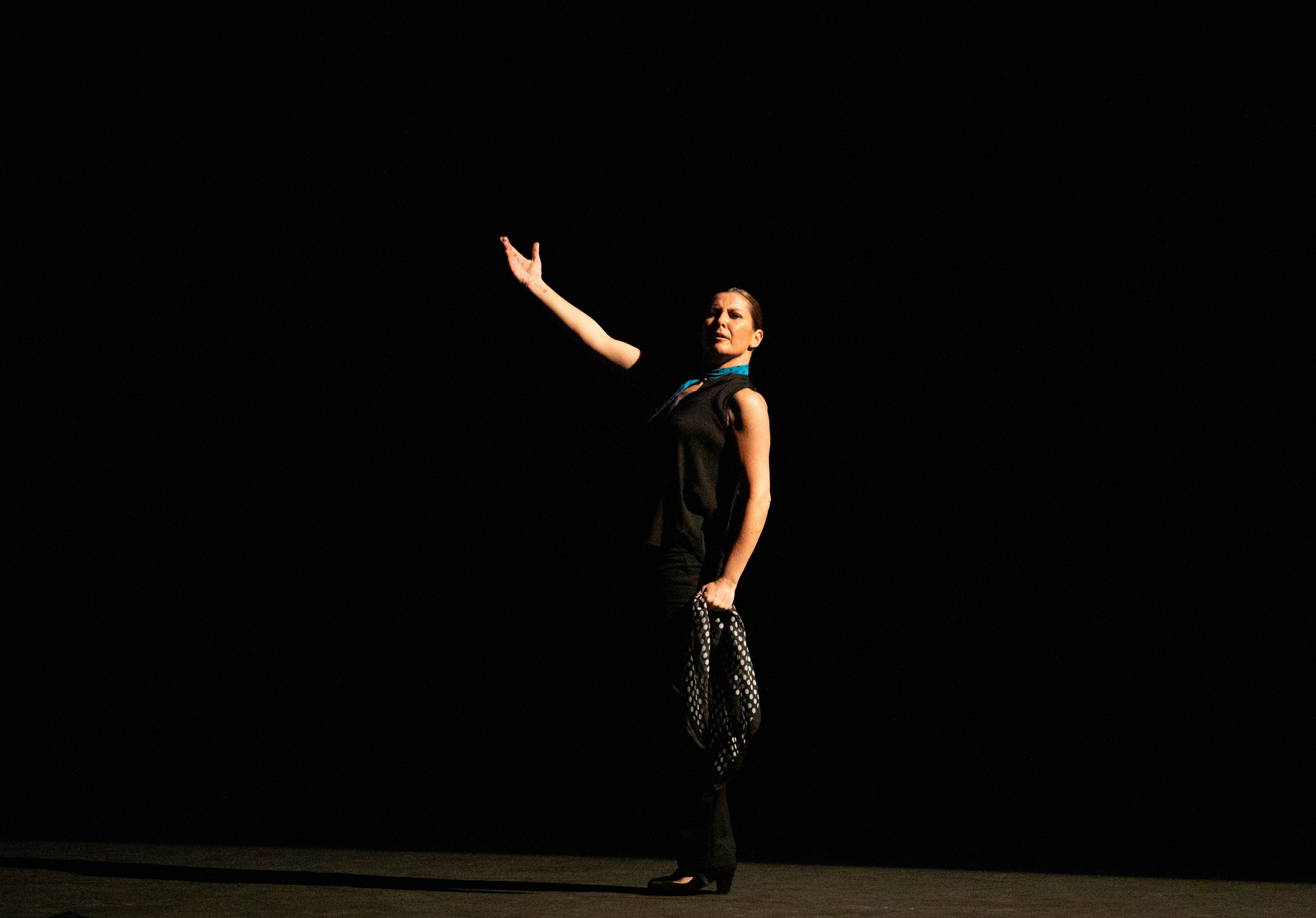 It is hard to decide whether Sara Baras is a dancer who happens to be a gifted musician, or a musician who is also a great dancer. Given the flamenco artist’s impeccable sense of rhythm and footwork as precise as a fine Swiss watch, the clear answer is that she is both.

In her opening-night performance of “Sombras,” an exclusive act for the 12th season of Flamenco Festival Miami, taking place through March 17 at the Adrienne Arsht Center for the Performing Arts, Baras was most in her element when she was interacting with her ensemble of seven musicians. While she seemed aloof at the beginning of her first solo, a farruca, the moment percussionists Antonio Suárez and Manuel Muñoz “Pajarito” came out to join guitarist Keko Baldomero, the entire stage pulsed with life. The sounds of North Africa blended with those of Andalusia as hand drums and the hypnotic, echoing thud of a ceramic udu drum joined the traditional flamenco palmas (rhythmic clapping) and Baras’ relentless, driving footwork.

The musicians and Baras played off the four-four rhythm, tossing it back and forth among themselves like a group of old friends exchanging stories. It was a magical, joyous interlude — the flamenco superstar, just another musician jamming with the guys. Grinning and snapping her fingers to the beat, Baras allowed space in the program for the audience to enjoy these extraordinary musicians along with her. Later on in the performance, singers Israel Fernández and Rubio de Pruna filled the hall with intense, soulful renditions of traditional and contemporary flamenco melodies.

The corps of dancers, four women and two men, are all strong, though they often played second fiddle to Baras. The male dancers had some compelling duos. Their rapid footwork reverberated in a martinete as they staged a fight with the wooden canes Gypsy men traditionally use to defend themselves. In another number, when they approached one another from across the stage, they swirled the skirts of their long, black frocks like a pair of seductive vampire bats.

In “Sombras,” Baras tends to rely on visual images where other flamenco choreographers might emphasize emotion. Fond of beautiful fabrics, she often combined them with lighting to dramatic effect. In one dance, spots beamed down in angled lines to echo the fringe of the women’s huge silk shawls, causing the images of the swirling cloth to flicker and shimmer like a silent movie. In another, the women emerged in long batas de cola (trained skirts) that floated around them as if they were sea anemones on some dark, surreal reef. The best effect, however, was the simplest: Untying a small scarf from her wrist during her farruca, Baras turned and turned, a whirl of windmill arms in space, the scarf’s length amplifying and intensifying the blurred image that her body became.

Baras is, undeniably, a consummate performer. Few dancers can flawlessly execute a series of 12 vueltas quebradas, the back-arched turn emblematic of female flamenco dancers. She did it not once, but twice in the program. She is also a master of the theatrical gesture: jutting her chin defiantly to end a phrase, smiling coquettishly and blowing a kiss to the hall, or, strutting offstage like a triumphant prizefighter, arms stretched in a ‘V’ to the sky.

While these moments can at times come off as affected, at others they are tremendously powerful. At one point during her farruca, which she has referred to as the defining dance of her career, Baras stood in a spotlight downstage, perfectly still. Long seconds of silence ticked by in the 2,400-seat auditorium, a silence that spoke volumes. There was barely any movement at all, and none of the fiery footwork, just a simple port de bras. But it was as if the audience was collectively holding its breath. Few artists have what it takes to pull this off. More than 30 years into her career, Baras still has the technique and charisma to make it happen.