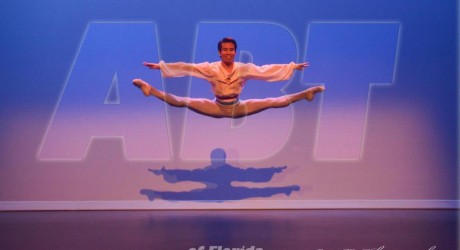 Arts Ballet Theatre opened its 2013-14 season with the South Florida debut of Pentimento, an abstract ballet by Venezuelan chorographer, Vicente Nebrada, set to Bach’s Four Suites. Nebrada was the artistic director of the National Ballet of Caracas until his death in 2002. While relatively unknown in the United States, his choreography has been performed by American Ballet Theatre and Joffrey Ballet among others. The much-anticipated debut of Pentimento opens with a dozen or so dancers lying face up on the floor. In the “Introduction and Adagio,” each dancer slowly stands and in a series of plies and long arm extensions, they gradually begin to interlace hands. Clusters of dancers assemble and disassemble, constructing and reconstructing new formations. This first section is emblematic of the entire ballet, which is inspired by the Italian word pentimento, a term used in the visual arts to describe a painting where several images have been created and later painted over. According to the program, the choreography seeks to create “the reappearance of an image on canvas which has been painted over.” This sense of visual composition is apparent over the course of the ballet and it is one of the most interesting features of Pentimento. Male and female dancers begin in simple tights and leotards, mostly in pastel colors, but as the ballet progresses, they don capes, scarves, skirts, and finally, masks. The finale depicts a royal court from the Renaissance period. The vivid cast of characters includes a prince, jester, priest and courtier to name a few. Nebrada’s choreography features ample partnering and numerous solos. On the whole, the male dancers seem to labor under the demands of the choreography, especially when it comes to partnering where at times, they struggle to smoothly execute lifts. Breeana Flannery, Lillian Hill, and Remi Lartigue as Courtesan, Country Girl, and Jester respectively, danced with the most confidence and clarity. The dancers’ waning strength and energy returns tenfold in the company’s performance of Firebird, which leads me to believe the troupe needs more time and practice to feel comfortable with Nebrada’s choreography. Firebird, choreographed by Arts Ballet Theatre’s artistic director Vladamir Isaaev to Stravinsky’s legendary musical score, is a staple of the company’s repertoire. Isaaev’s choreography follows the typical tale of the prince who catches the exotic bird and then sets her free. Indebted to the Prince, the Firebird later rescues him from the Katschei, or death’s wrath. What distinguishes this production of Firebird is the digital projection of the enchanted forest that serves as a backdrop to the ballet. Created and produced by Digital Media Designs, the tree that bears golden apples, radiates with color and movement. The digital imagery and animation infuses Firebird with a sense of magic and drama. Jun Tanabe is delightfully sinister as Katschei, the death figure. His series of jetés and his fouettés are crisp and clean. Likewise, Kaori Fukui exhibits dramatic depth and prowess as the Firebird. Hernan Montenegro faired much better as the Prince in Firebird than he did as Pentimento’s Courtier. His duos with Fukui were engaging and dynamic. Finally, Flannery was lyrical and radiant as the Princess. Arts Ballet Theatre returns Dec. 8 for their version of The Nutcracker at The Fillmore Miami Beach at the Jackie Gleason Theater; www.artsballettheatre.org.