Review: ‘A Midsummer Night’s Dream’ Lives Up to its Dreamy Promise 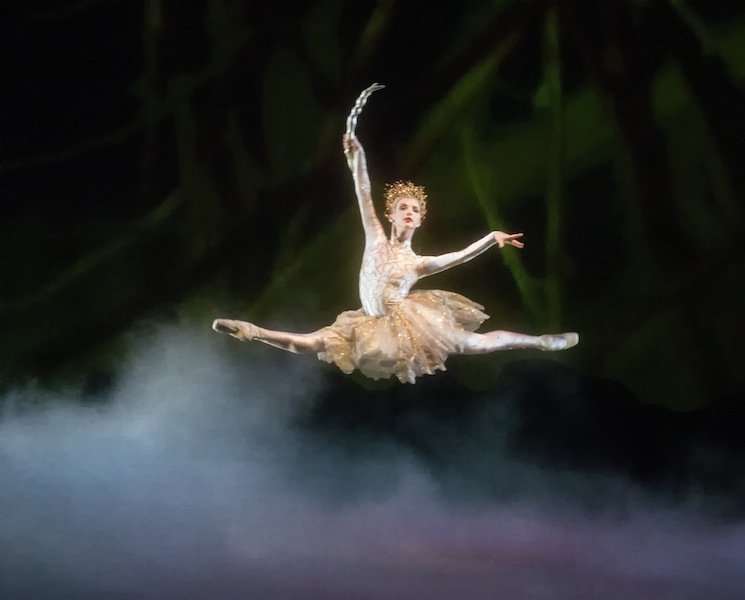 Were those lovers really dancing underwater or did they find a foothold for their rapture in a mossy grotto? Was that damsel, looping around, somehow tangled up in looming seaweed, or did the stage image simply reflect the disorientation of her distress? At the Arsht Center, anyone who demanded daytime logic, questioning the designs by Michele Oka Doner for Miami City Ballet’s A Midsummer Night’s Dream, might have been miffed.

But this was a dream, after all—a nocturnal fantasy about affairs of the heart and a fay realm that intrudes upon humans. The glimmer and gloom of marine-environment projections conveyed mystery and beauty. And costumes appeared concocted from sea treasures. Awash in the spell of this rendering, Balanchine’s ballet never lacked artistic oxygen.

To an amalgam of Mendelssohn compositions, which support hubbub, sensuousness, and majesty, the choreographer concisely laid out the basics of Shakespeare’s original play. The first act packed in the clash between Titania and Oberon, Queen and King of the Fairies, over a changeling—with blithe spirit Puck as minister of mischief—plus the vicissitudes of two pairs of lovers. The second act served balletic convention with a grand divertissement for a mass wedding, its ideal harmony underscoring the triumph of love.

Whereas a scrim and mood-tinged lighting aided in conjuring up the aquatic motifs of the first part, the second brought a sandblast of radiance, with Coral Castle in background dabs representing the ducal palace. Whether seemingly submerged or brightly revealed, the dancing was detailed and robust, confirming the performers’ commitment to this company premiere.

More gold-medal athlete than sprite, Shimon Ito—devilish in technique and dramatic purpose—made his mark early as Puck in the Friday, March 18 show, cavorting among restless creatures and quick to serve his master Oberon. The king’s own forceful strides required ornamented jumps and mercurial progressions, which Kleber Rebello looked happy to clinch. Simone Messmer as his queen took a willful stance and flaunted expansive moves—not to mention the pleasures of having a cavalier (Reyneris Reyes) back at her compound ready to keep her quite animated and put a smile on her face, thank you.

In the ensemble there was fidgety finesse from assorted fairies and butterflies, with the irrepressible Nathalia Arja as wing leader. Jordan Elizabeth Long as Hippolyta commanded a team of silvery seahorses (hounds in the ballet’s original production), the whip of her turns asserting mastery.

Levity could bubble up here: a bewitched Titania, for instance, showed gusto in loving Bottom (Didier Bramaz), transformed into a manatee cuddlier than a plush toy. But serious interpretation was the rule, best seen in Jennifer Lauren and Chase Swatosh, paired affectionately as Hermia and Lysander, and Emily Bromberg and Renan Cerdeiro as Helena and Demetrius, first in contention and finally fulfilled. Bromberg knows how to make a strength out of bared vulnerability, and her passion rippled luminously across the stage.

All this whimsical bustle wound up in the pomp of the marriage ceremony, with dancing from Tricia Albertson and Rainer Krenstetter as a delightful wedding gift. She figured as the main exponent of unforced classicism, a natural even in Balanchine’s most taxing exigencies.

To catch Jennifer Carlynn Kronenberg’s farewell performance as Titania, marking the end of a 22-year old career at MCB, was reason enough to see Midsummer’s Sunday matinee. But other pleasures awaited—at the forefront, Michael Sean Breeden’s Puck, Renato Penteado’s Oberon, and Jennifer Lauren’s lead in the divertissement. Breeden — the pliancy in his arms setting off the sharpness of his legwork—went for boyish charm. With especially brisk foot-beats, Penteado showed off amazing spring and calibration. And Lauren continued to ascend in her dancing, terrific technique in tune with the personification of amorous bliss.

When Kronenberg danced in the fairy-court scene with her husband, Carlos Miguel Guerra, as the cavalier (he’ll also be missed as he joins her in exiting from the company), their daring in a lift or caring in a hold exemplified the unmatched melding of collaboration and individuality. But throughout the ballet Kronenberg luxuriated in a command of acting and movement she owns beyond any role. Her regality came double, as the character and as the artist. We can celebrate her past performances and wish her well in future endeavors, but most of all cheer the ever-evolving present she offered — both in the sense of gift and moment-to-moment timing of that wonderful instrument, her body. When a dancer brings such talent to the stage, closed curtains hardly matter.

There are two more chances to catch this MCB 30th-anniversary celebration, in West Palm Beach and Fort Lauderdale.

Miami City Ballet’s ‘A Midsummer Night’s Dream’ continues at the Kravis Center in West Palm Beach, April 1-3; and at the Broward Center for the Performing Arts, April 9-10; for times and prices, visit www.miamicityballet.org.