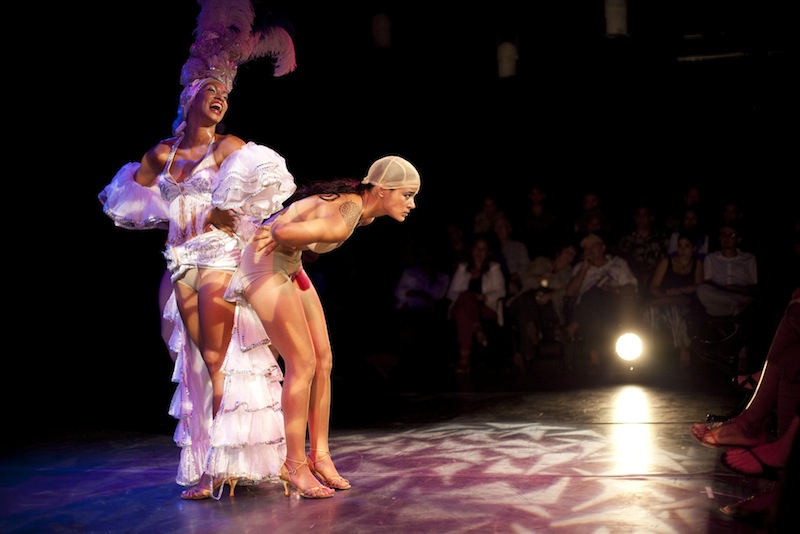 It felt like the end of an era, one that didn’t go out with a bang, or even a whimper, just with a sigh of relief. Copper Fest, named for Cuba’s patron saint la Virgen de la Caridad del Cobre, and sponsored by the Copperbridge Foundation, was a seven-day celebration in September of Cuban music, dance, visual art, and film hailing directly from the island. A newcomer dropped into Wynwood for the festival would have never known that as little as a few years ago, public outcry would no doubt have kept such an all-encompassing interchange with artists based in Cuba from ever happening at all, no matter how well-meaning the intent.

Copperbridge founder and director Geo Darder attributed the smooth reception to the apolitical nature of his organization, the changing times, and the subject matter itself: “It’s about unity…It’s not about Cuba, it’s about our history.” Exiles and non-exiles alike venerate Cuba’s patron saint, its unique musical heritage, its African roots.

La Virgen de la Caridad would have no doubt looked smilingly on the marvelous group of artists that crossed the Florida Straits for this seminal event. From Síntesis, the popular Afro-Cuban rock band that has had audiences around the world dancing in their seats for nearly 40 years, to DanzAbierta, the contemporary dance company whose U.S. debut was at none other than the prestigious Jacob’s Pillow Festival, Copper Fest gave Miami audiences a taste of the wild talent and artistic vision of performers of all ages in Cuba today.

There was a film screening, a fundraiser, and two gallery openings that, like the concerts, counterpoised very different cultural perspectives. One, at House of Art, which, said Darder, “united artists in their interpretations of the patron saint of Cuba;” and the other at Swampspace, where viewers experienced a decidedly grittier, more provocative take on contemporary Cuban youth, on longing and complacency, by Havana painter and mixed media artist Noel Morera.

Síntesis opened the series at the Light Box at Goldman Warehouse on Thursday, Sept. 4. From the moment lead singer Ele Valdés came dancing onto the stage, feet firmly rooted, shoulders soft, hips swaying, she had the audience eating from the palms of her hands. With her luscious voice, her earthy and authentic dancing and her easy banter, the command this funkadelic diva holds over a theater is extraordinary, both for its unquestionable authority but also for its effortlessness. Flanked by vocalist and daughter Eme Alfonso (yes, both are named for letters of the alphabet), batá master and Tina Turner look-alike Yaimy Karell, and invited dancer Yanexy Cruz of the Conjunto Nacional Folklorico, to a woman they exuded a joy that enveloped the room, wrapping listeners in a bonhomie that lasted all evening long.

At 71, uber-cool group founder Carlos Alfonso is a patriarch of Cuban fusion music, the man who took the sounds of the Yoruba chants of West Africa and infused them with rock, soul, and a dose of the spirit of trova. Despite this overlay of non-traditional sounds, his group’s music stays true to its roots, with singing in the original Yoruba language and an ever present respect for the songs underlying rhythmic structures. It is a delicate balancing act, trying at once to modernize and attract new audiences to these ancient melodies while at the same time holding fast to tradition. When keyboardist José Gavilondo rips into a long synthesizer solo that would feel at home in a Pink Floyd concert, one marvels that it actually blends so well with the African song that is playing beneath it.

The highlight of the show was when DanzAbierta performer Yoankis Matos, fresh from the airport after being held back in Havana for a visa issue, took to the stage with Yanexy Cruz in a limbs-flying, hip-rolling, take-no-prisoners homage to the spirit Ochún. Surely the gods must have been pleased.

DanzAbierta, one of Cuba’s foremost contemporary dance companies, also found its inspiration in a traditional form, but one that is about as far a cry from African chants as you can get: the 1950’s-style Havana cabaret show. Cuba’s collective cultural memory is obviously very different from that of the Miami exile community, but the nightclub culture on the island is something both groups remember with fondness, and “Showtime” is a both a meditation and a wry commentary on that phenomenon.

This setting gave Barcelona-born choreographer Susana Pous ample latitude to look at a variety of themes: relationships, particularly among artists, the mind-numbingly repetitive rehearsal process, and, most prominently, the duality of the personas human beings present to the world and each other. That we all “wear the mask,” is an old saw, but, like Jorge Luis Borges who treated it with such originality in his short story Borges and I, Pous must not have gotten the memo that this theme’s been done and re-done. It’s lucky for us that she didn’t, as this evening-long meditation on what it means to spend one’s life posing, fulfilling a stereotype that is at once both totally fake and absolutely fabulous, mines the material in a series of vignettes that demonstrate not only the company’s technical prowess but also their expressive talents as they move one by one through the unexpected and arresting images Pous and her dancer-collaborators have so carefully crafted.

As the piece begins, the six dancers are all stage right, huddled in a shapeless mass, naked but for flesh-colored underwear and skull caps. This is a truly beautiful company, the performers’ physiques and technical prowess on a par with their impressive expressive capabilities — male dancers Abel Berenguer, Gabriel Méndez, and Yoankis Matos must belong to the Michelangelo school of body building; any one of them could have competed with the original model for the statue of David. Along with Mailyn Castillo, Taimy Ramos, Diana Columbie, the group moves across the stage as if creeping through some primordial soup, picking up the pieces of fabric that are arranged before them like waves and sea foam.

The ruffles turn out to be costumes, white rumbero outfits seemingly lifted from some Copacabana dressing room that was frozen in time. As they move in the direction of a plain black wall with a slit down the middle, they slowly morph into cabaret dancers, and we discover that on the other side of the blackness are the glitzy gold curtains of a bright and tacky nightclub stage. As they pass through the slit, they are transformed, like Persephone emerging from the underworld into the springtime.

Darder envisions a festival in which artists do not just perform for us but rather engage with us. After each show, there were onstage discussions, and one could see a performance one night and take a free class with the musicians or dancers the next day. At the Afro-Cuban dance workshop offered by Yanexy Cruz, the female musicians of Síntesis stood alongside local dancers young and old, black and white, Hispanic and not.

As beginners tried out the unfamiliar steps, and Cruz, Valdés, Alfonso, and Karell not only danced but sang along to the recorded chants that accompanied the movements, the Light Box studio felt like it had been transported, Oz-like, to some little town in the Antilles. It was a magical moment.

Geneticists tell us that we are strengthened through diversity, and that the mutts and mongrels of a species are its true thoroughbreds. The hybrid Creole culture of Cuba was on glorious display at Copper Fest last month but so too was Miami’s own unique blend of cultures, colors, and creeds. Next year, Copper Fest’s focus will be on Brazil. Let the exchange continue!