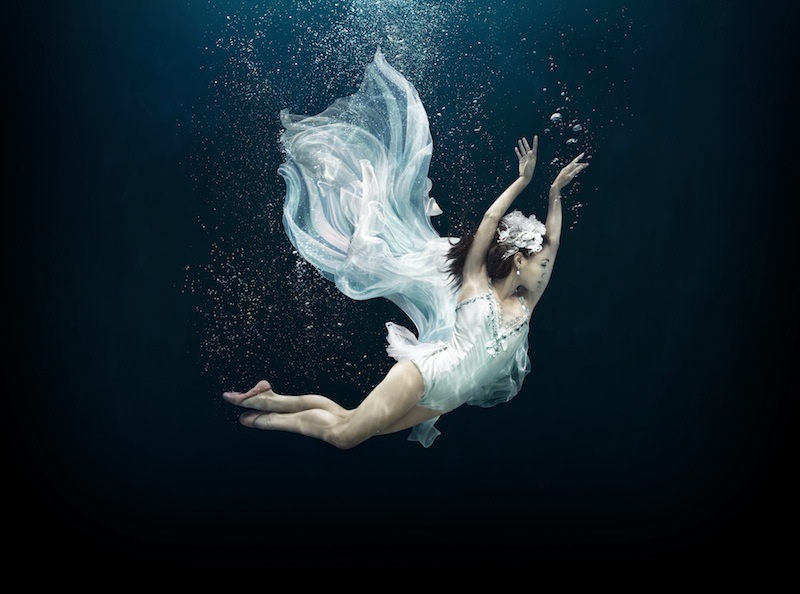 On a warm moonlit night, those who sink their feet in the sand of the South Florida shore might just come upon a supernatural realm, the sparkle on the whitecaps bright emanations from fairies ready to conjure up mischief and bliss for fools and lovers. Or so Miami City Ballet would charm us into believing as the company gets ready to close its 30th anniversary season by relocating the world of Balanchine’s A Midsummer Night’s Dream, based on Shakespeare, to our sub-tropical region.

For MCB artistic director Lourdes Lopez, this re-imagined setting for a company premiere, with newly commissioned costumes and stagecraft inspired by the marine environment, is a great opportunity to bestow on a masterwork the magic of home.

“I grew up in this ballet,” Lopez notes, recounting how during her years at New York City Ballet she ascended through its roles — from hunting hound to fairy to the classical grandeur of a courtly pas de deux. While cherishing her intimate acquaintance with the movement, she came to believe the production would profit from a fresher look. “Challenging the choreography is not a bad idea,” she contends. Keeping the steps intact within a novel setting can, in fact, shed stronger light on their integrity.

In 1962 Balanchine created this work as his first full-length dance drama for NYCB, and Lopez saw up close the value Shakespeare’s play held for the choreographer, who could passionately recite its lines in Russian, a beauty that had possessed him since his Imperial Ballet days. From early artistic exemplar to superlative two-act ballet, Shakespeare’s story went through decades of gestation. This involved not only arriving at the right scenic choices to translate the play into dance, but also finding the best music to buoy the movement since no full-length score existed to suit the choreographer’s needs. Mendelssohn’s concert overture A Midsummer Night’s Dream and his incidental music for the play (including the famous “Wedding March”) naturally lent themselves to the ballet, but in addition Balanchine had to piece together sections of other works by the composer to form a viable whole. The result attests to the choreographer’s musical acuity.

Now MCB has the opportunity to put its own stamp on this golden page of ballet history. Over two years ago Lopez approached the Balanchine Trust about her project, but not without some trepidation, given that organization’s zealous guardianship of the choreographer’s legacy. Their green light should not be surprising, however, given Lopez’s resumé, which includes past tenure as executive director of the George Balanchine Foundation. “The Trust requested I take on the role of executive producer,” Lopez explains. “I have final approval of all sets, costumes, and props. This way they could make certain the choreography wouldn’t change and, more importantly, that Balanchine’s intent would remain. Re-imagining is one thing. But where that’s going to happen is another. The Trust has been kept informed of all final decisions.”

Lopez considered dozens of artists for the re-design, but plans didn’t take workable shape until she was introduced to Michelle Oka Doner. This Miami Beach-native has a wide-reaching artistic production often inspired by nature; her prominent commissions for public installations include “A Walk on the Beach,” a miles-long expanse of inlaid terrazzo for a Miami International Airport concourse that glitters as if with the residues of a tide. Doner’s proposal to change the setting of Midsummer from Athens and its woods to seaside Florida, drawing design contours and hues from aquatic life, attracted Lopez like siren song.

At an Open Barre, a lecture-demonstration at MCB studios in late October, Doner revealed her fascination with the meeting of land and water, where fluidity and open horizon spur the artistic imagination. “Miami gave me a language for expression,” she said, recalling beach explorations that have yielded suggestive treasures. The textures of ocean detritus may end up in her work, and those organic qualities have come to bear in the cut and fabric of her costumes for Midsummer: tutus like jellyfish, unitards with the patterns of coral. Adding to the Florida allure, images of Coral Castle — that mysterious assemblage of cut-rock constructions in the southern part of our county — inspired the ballet’s court setting.

Further energizing this production, Lopez brought in playwright Tarell Alvin McCraney — a MacArthur grant recipient and recent International Writer-in-Residence for the Royal Shakespeare Company — as dramaturge to guide dancers deeper into the relationship between Shakespeare’s text and Balanchine’s steps.

“Tarrell really won us over with his ease. Everything he pointed out seemed so logical,” comments Michael Sean Breeden, who will alternate dancing the roles of Puck, a pivotal agent of both disruption and redress, and Bottom, the weaver who in this production gets transformed not into a donkey but a manatee. The understanding Breeden gained from McCraney helped the dancer keep his characters honest to Shakespeare while enhancing the validity of the movement.

“Though Puck’s actions are an extended prank, I kick up the mischief without mugging,” says Breeden, a spirited interpreter who’s relished the athletic rigor of playing the impish deputy to Oberon, King of the Fairies (Edward Villella, MCB’s founding director, originated the king’s role and reprised it for a 1966 NYCB film).

“My stamina is there for Puck,” Breeden asserts. “And I can push through distributing energy from beginning to end.” He points out the different demands for portraying Bottom, who has to wear a sizeable headpiece. “With an almost slothful quality, he’s Puck’s total opposite. I had to learn to convey character from the shoulders down.”

On the romantic front, Jennifer Lauren will take on Hermia with a deep feeling for the precariousness of love. Due to male obstinacy and supernatural meddling, this character is sometimes pursued, sometimes abandoned by men. “That’s a scary place,” says the ballerina, recognizing that without her young suitor Hermia is lost at sea. Lauren lets that emotion compel the movement, its subtleties of conflict and desire encouraged by McCraney’s commentaries.

On another cast Lauren will scale a peak of classicism during the second act’s divertissement. Although Hermia also gets to do a long showy solo as part of her characterization, this other role exposes a transcendent quality: love as triumphant in the restoration of harmony. “This is symbolic but also very intimate,” says Lauren, keen to endow her presence not just with passion but also an exacting musicality.

For Simone Messmer, who joined MCB last year as a principal, dancing Titania, Queen of the Fairies, has been an elite induction into her new company. “This is the first thing I rehearsed back in June,” she relates. “And it was great to be able to concentrate on such a desirable role.”

Though other dancers with School of American Ballet training (NYCB’s primary incubator for the Balanchine style) may long have held this Midsummer close to their hearts, as a former American Ballet Theatre and, briefly, San Francisco Ballet member, Messmer brought in experience with The Dream, Frederick Ashton’s one-act version of Shakespeare’s play. While extending her talent in the particularities of Balanchine, Messmer applied her expertise with story ballets to make a mark with a character who must maintain dramatic continuity at intervals on stage.

She immediately has to establish her conflict with Oberon and then enliven the dynamics of contention and attraction all the way to conclusion. “The male doesn’t dominate here, and I love how Titania throws aside the traditional female role in ballet, arguing for her side.” This assignment after an audacious career move to a new environment has given Messmer an unparalleled opportunity for growth. “The trust Lourdes has shown in giving me this part offers an incredible sense of freedom — the encouragement that allowing myself to have made a change is okay.”

Beyond all the personal satisfaction Midsummer provides the dancers, Breeden sees this ballet as an inevitable achievement for a company always eager to pursue rewarding artistic ventures. “It’s been a long time coming, but that has sweetened the deal,” he says. “We can love this even more now at our 30th anniversary, a narrative that speaks to us, so beautiful and elegant.”

Miami City Ballet’s re-imagined ‘A Midsummer Night’s Dream’ runs Friday through Sunday at the Arsht Center for the Performing Arts, 1300 Biscayne Blvd; tickets $25 to $124. It later moves to the Kravis Center in West Palm Beach on April 1, and the Broward Performing Arts Center in Fort Lauderdale on April 9; www.arshtcenter.org.