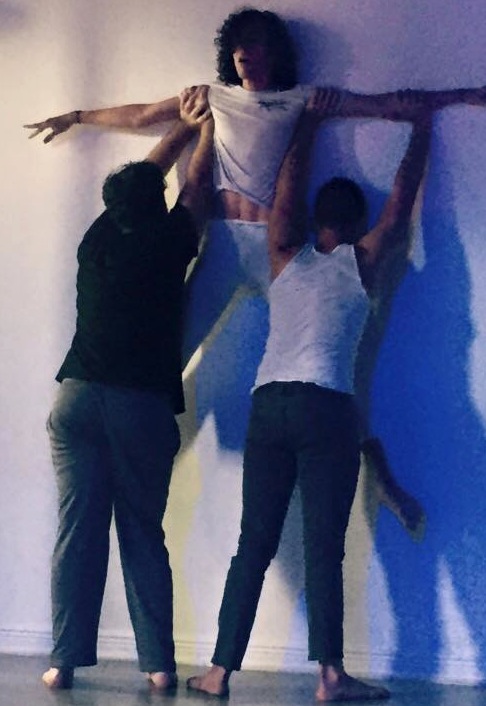 While Miamian Pioneer Winter has been active in the local dance community as a choreographer, he has also been wrapping up his MFA at Jacksonville University. HOST, Winter’s current project, is also his thesis performance. Premiering March Thursday and Friday at the Miami-Dade County Auditorium On.Stage Black Box, HOST explores the potential of what Winter calls a “practice-based” approach to choreography.

The piece began as a series of simple instructions or exercises for the dancers. Since then the piece has evolved into a full-length performance. In fact, one could say it is actually two performances in one. In collaboration with creative partner Jared Sharon, Winter has created an unconventional performance space. A wall divides the stage into two distinct sides, and audience members will generally see only one side or the other.

We spoke with Winter recently about his newest choreographic discoveries as he neared opening night.

What was your creative process for this piece?

I’ve always improvised. When rehearsing with dancers or performers, I’ll think about it leading up to the studio space. But I won’t actually have anything written down. I kind of just play it by ear. I have found that mimicry, or having the performer copy something I might already have in my head, isn’t always the answer. And that it is better to get them into a state of awareness, whether that’s an emotional state or a physical state that would reveal the same conclusions I wanted them to draw from the beginning.

Because of that, this is the first piece I’ve done where absolutely every performer is indispensable. Every person in the piece has brought their own inspiration and their own response systems.

What kind of characters have you created in HOST?

There are five men, four of whom are Cuban and gay — I’m just gay — and we all come from similar backgrounds and for the most part I think we’ve all grown up and come of age in Miami. You could say the piece is very Miami. Maybe it’s a Miami avant-garde piece. I don’t really know what Miami looks like right now since I’m in it, I don’t really have an outsider’s perspective. But even with that in mind, the performers are not human. They are extremes of different dichotomies: insatiability/overdose or control/controlled, powerful/powerless, dominant/submissive.

Each person uses their own experiences and their own reactions to the paces they’ve been put through in the rehearsal process, in order to create something infinitely more unique than if I had just imposed my own feelings on them. And yet nobody is actually a full human because every human has some kind of balance of all those different things. And the characters that you’ll see in the work are very much imbalanced, to the point where their relationships with each other suffer. They are extremes.

You are using a wall to divide the stage into two separate spaces. What is the effect of the wall?

This is kind of tough for me as a choreographer — I hold both sides so precious. I spent a lot of time making both of them. But an audience member might only be completely aware of one half that was made. There will be this space that they know intimately and then the space that they kind of know, maybe through sound or through a glimpse. The space that Jared and I have tried to create is that of a place that might be familiar. It might be something reminiscent of a bath house, or a steam room, or a dark alley or motel or something. But it’s also not.

How would you describe the two different sides?

The choreographies are completely different, there’s nothing repeated. One side is very Apollonian — there’s a tenseness or a rigor to it that is so extreme, so overpowering, that it’s dangerous. And then the other side of the wall is more Dionysian. It’s almost hedonistic. And within that out-of-control approach to movement is a different kind of danger.

The tricky part was trying to create the most full experience for each side. It’s not like you are watching half of the work, you are watching the entire work. And if you happen to come the next night, you see another full work. But you are no missing out by not seeing the second side. It’s just that you would have a different perspective.