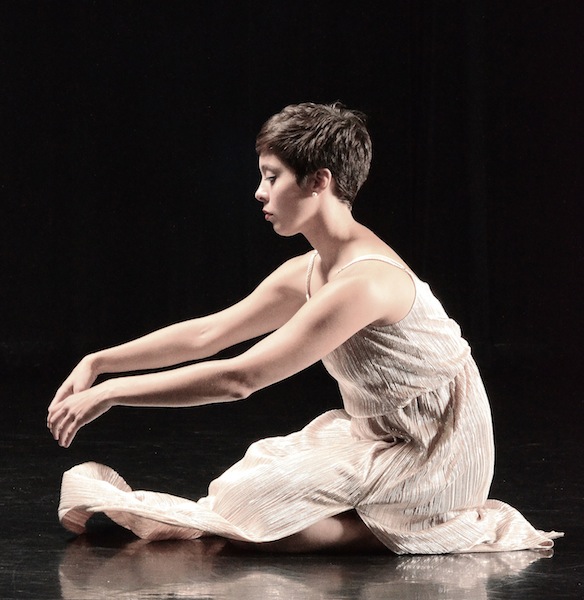 Organizers Hannah Baumgartner and Diego Salterini — co-founders of Dance Now! Miami —  created Miami Open Stage for talented Miami choreographers to showcase their new work. They also intended it as a venue for dance enthusiasts looking for a chance to discover what’s happening on the ground floor, and to pick the brains of Miami’s local choreographic talent.

Just off a summer work-shopping her choreography with Earl Mosley, Angela Freger, an Orlando native, says that she now feels genuine enthusiasm for the growing dance scene here in Miami.

One of the four choreographers showcasing new work this coming Sunday, Freger’s piece, “Alapse,” investigates the complicated memories that persist after a dancer’s performance life has been cut short by a life-altering accident. As part of Miami’s talent base, Freger is convinced that ongoing efforts from organizations like Dance Now! have brought Miami to a tipping point.

“I have seen a lot of growth in the Miami dance community in just the last three years,” she says. “I think in 10 years that Miami will be on the radar as an important, nationally recognized dance community.”

Samantha Pazos, another choreographer whose piece, “Moments before…” first premiered in October, describes her work as a simple conversation between her and her father, though the terms she uses go far beyond that.

“My piece stems from a larger body of work, titled ‘Yo vengo de todas partes, and towards everywhere I go,’ which dealt with issues of displacement, exile, memory and immigration.”

In her work, Pazos incorporates “the use of contemporary dance forms, along with nuances of traditional forms of Cuban social dances [i.e. guaguancó, etc.], and gestural work.”

Exchanges like these underscore the critical importance of events like Miami Open Stage. As dance theorist Diana Taylor cautions in The Archive and The Repertoire, “memories, traditions and claims to history disappear when performance practices lack the staying power to transmit vital knowledge.”

In the case of Megan Holsinger, herself a former member of the Dance Now! company, memory is the principle structuring element of her new choreography, “Covetous.”

Framed around four dancers that each “symbolize a different aspect of the same woman to express the battles within oneself to resist negative emotions,” the piece stems from a pivotal experience she had while attending the Burning Man festival out west in the desert.

Holsinger says that after “seeing and feeling so much love and inclusion there,” she conceived her piece as an investigation of the negative emotional contrast she experienced returning home to Miami.

For Christopher Rudd, whose company RudduR Dance uses movement as a way “of holding a mirror to society,” Miami Open Stage is his opportunity to finally come home after a very full career as both dancer and choreographer. “I danced incredible roles, toured many cities around the planet, and lived in four countries,” he says. “All thanks to the foundation I received in this city. However, I never had the opportunity to perform here at home in Miami.”

In his piece “…I See,” Rudd enacts the very transmission of performance practice that Taylor describes. Kristina Zaidner, a Miami native herself, will be performing Rudd’s choreography for her grandfather, who turns 102 in April.

After the performances, Josie Guilleksen, a moderator from Artburst Miami, will lead a Q&A session connecting artists to their audience in a discussion of dance craft and the choreographic process.