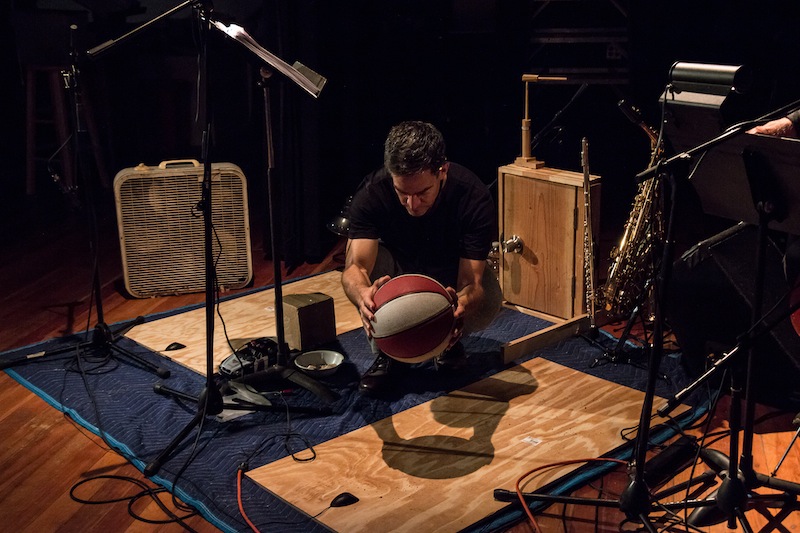 Cooking may be Dan Froot’s favorite thing. This is saying a lot since Froot is also a composer, a dancer, a sax-player, a play-wright, an oral-historian — an all-around performance artist and the winner, among myriad other accolades, of New York City’s prestigious Bessie Award for innovative dance/theater. This weekend, he will be cooking for Miami for the Miami Light Project, bringing together his customary concern for seemingly disparate ingredients.

He will also be presenting a new performance piece entitled “Pang!” that sets out to explore food insecurity or to put it more plainly, issues of hunger.

Froot describes the genesis of all this as arriving more than a decade ago with the birth of his twin sons. Their birth was nothing if not a daily, visceral meditation on the need for nourishment.

While Froot’s explorations of hunger in earlier pieces worked with huge puppets and shadows, this time theatricality is at a minimum. The work will be presented as if it were a radio play in progress. Froot wants to focus on sound, the sound of these stories, with minimal distraction.

The stories to be heard are not the most extreme. Rather they explore the food insecurity that fewer people acknowledge or perhaps are even aware of it —that of the families of the working poor and middle class.

“Pang!” is the result of three years of painstaking work and collaboration upon collaboration. Froot set out to listen to the stories of those who wished to share them. He received formal training as an oral historian in an effort to do this as thoroughly as possible. He sought out grass-root social service partners in several U.S. cities and asked for their help. He settled in to work on stories from three cities: Los Angeles, Cedar Rapids, Iowa, and Miami.

Here in Miami, he collaborated with Overtown’s “Touch Miami with Love” and with Little Haiti’s “Curly’s House of Style/Hope Relief FoodBank.” After initial conversations, he and his team settled into still deeper conversations with 12 families. Finally he had 250 pages of transcribed conversations per family to work with. And out of that, Froot decided on the stories of the three families that now comprise the work.

Next came the process of blending the three stories and the chorus of voices into one work of art. He describes having to choose just one thread out of chronicles so rich and nuanced and poignant as feeling “nearly as an act of violence.” At every step of the process he asked the families for their feedback and permission. He sees his work as “in service to these stories.”

Small wonder then members from the “Pang!” Miami family will attend this weekend’s performances and lead a post-performance discussion around the large kitchen-table that Froot has placed between the audience and the actors throughout the performance. Audience members will be invited to come to the table to talk and listen, to come and go from the table as they wish. Froot’s home-made finger food will be served as well.

Froot’s activism has so little to do with blustery language. Instead he speaks simply of hope for “cross-class” theater. He and his Miami collaborators are reaching out especially to the Overtown community, making words like “inclusion” and “welcome” real.

Meanwhile, in what can surely feel increasingly like an age of cynicism, does Froot expect “cross-class’ theater and“Pang!” to draw in a crowd? “When we presented the piece in L.A, it was sold out,” he says. “In Cedar Rapids, — well, not so much. In Miami, we’ll see. ”