Out in the Tropics ‘Bailografía:’ Flamenco Unearthed 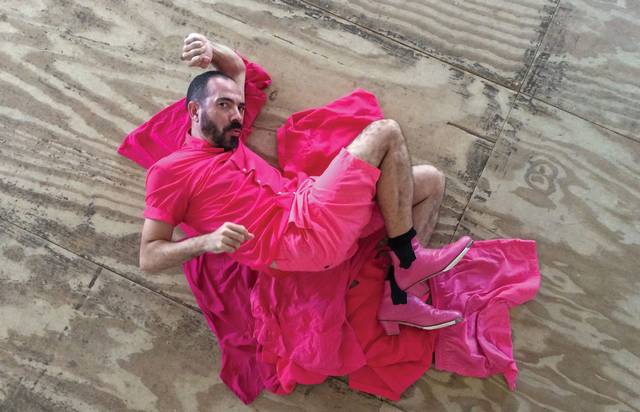 Juan Carlos Lérida’s performance Bailografía, part of the seventh season of the Out in the Tropics festival, is not the story of a man’s trajectory as a flamenco performer over the course of three decades, although the title and the numerous venues and dates that flash above the stage hint at biography. Infusing traditional flamenco with contemporary movement and theatricality, Bailografía is a hypnotic meditation on love, death, and memory.

Bailografía is the story of armed guards posted at the entrance of the cabaret, and just a stone’s throw from the guards, men stretched out on the concrete of a now-defunct art space turned makeshift shelter. In rumpled clothing and pants rolled up to endure the heat, their sweaty shins glisten under a foggy moon.

Bailografía is the story of a young man dancing a Sevillana with a girl in a polka dotted dress, their waists as fluid as the aguardiente sloshing over the lip of a glass on a tray carried to yet another spectator at another cabaret 12 years before in Girona or Seville or Madrid. It is the story of love between two men and how that love is still dangerous.

Lérida’s ferocious execution of movement and lyrical transitions from one episode to the next reveal an artist who does not tell stories through dance – the stories tell him. Lucky for us, he’s an attentive listener. We watch. The guards wait at the door. The homeless men stretch out.

Lérida begins the performance prostrate before a mound of dirt, his hands swallowed by the earth. For the next hour and a half of non-stop flamenco fervor, he periodically returns to the dirt pile and buries the genre’s accoutrements – Spanish fans, a handkerchief, symbolic threads sewn into his jacket, and the jacket itself. Of course, in avant guard fashion, he is subverting the conventions of flamenco. The elegant flourishes of the hands contort, the palmadas stutter, falter, then erupt. The zapateo or foot work stumbles, thunders, and argues with itself.

The deconstruction of a dance form is interesting, but it is not original. What’s original is Lérida’s willingness to embody the interstitial space between story and memory, masculine and feminine, rage and reconciliation. To create art from this in-between, uncertain space is noble in the truest sense of the word. In addition to meaning high-minded, the Latin root of noble, noscere, means to seek, to learn, to find out. Lérida is a mesmerizing performer, but here’s what makes him extraordinary: behind bursts of virtuosity and technical skill, exists the whispers and grumblings of a man who wants to know the meat and gristle of the human heart, as well as its miraculous pulse.