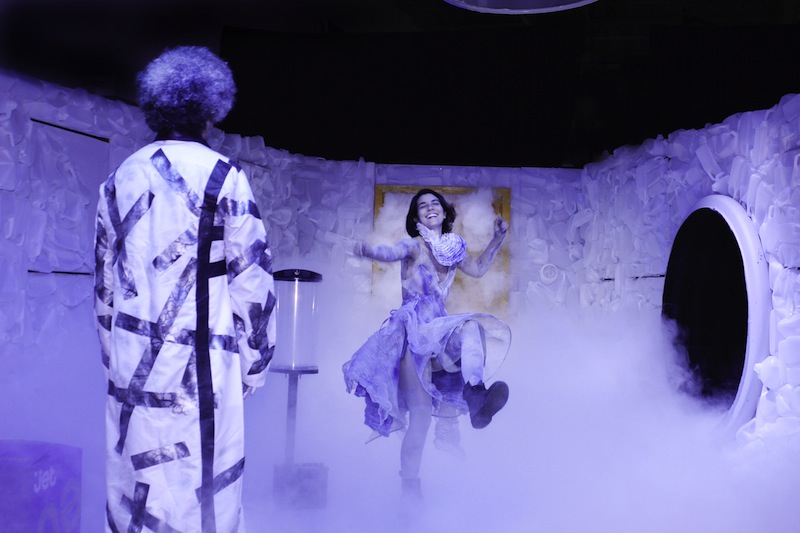 The personal ad promised “sex that could change the world.” “No strings attached,” it continued. So begins Boom, dramatist Peter Sinn Nachrieb’s much lauded theatrical adventure. After a long list of engagements in avant-garde spaces in New York, San Francisco, Seattle and beyond, Boom will have its South Florida premier on four consecutive January weekends at North Miami’s Museum of Contemporary Art starting Thursday.

So what about this promise of “ no strings attached”? We all know things don’t often stay that simple for long. And yes, things do begin to run amuck quickly. Nachrieb’s work is called Boom after all. Major global catastrophe rears its head. What will happen to poor humankind? Or fish for that matter? And what secrets are held by that woman pulling levers and playing the timpani (she sings too and sounds a wee bit like Bjork)?

In what can only be called a rave review for the work, the New Yorker writes: “Peter Sinn Nachrieb’s play flips from pants-around-the-ankles comedy to hipster Twilight Zone take-off.”

Boom is the first presentation by a new South Florida theater company, The Basement Project, with Oley Kheyfetz as the founder and director. His work is probably more familiar to audiences in Moscow and New York than those in South Florida. After over a decade of directing in his native Russia he was invited to work in the States and decided to stay. “Just like the characters in Boom, I had an odd feeling of some danger approaching back home,” he said. While in New York, Kheyfetz taught at both the Stella Alder Studio and Columbia University, and his directing included collaboration with Arthur Miller.

He says he found Boom enticing on a personal level. “Here was a narrative through which I could explore my own experience of Miami,” he says. “There is Miami as it is seen on from the outside — the dazzle of the beach and the beautiful people and the Housewives of who knows where. And there is the other Miami. There is life as we want to see it, life as we nearly expect it to be, and there is life as we are living it.”

Kheyfetz regards set design as hardly less important than directing itself. Perhaps it is no surprise that he concluded a museum would be the ideal setting. “It seemed the perfect place,” Kheyfetz says. (Spoiler alert, just sort of.) “In the play, humankind becomes just as extinct as the dinosaurs. So what could be better than having a museum as a stage set?” The performance features sound and music by Afrobeta

MOCA graciously took up Kheyfetz’s request to “borrow” the place. As Assistant Director Alan Waufle says, “MOCA has a long tradition of rich and innovative performances. We are pleased to accommodate work so acclaimed and of such quality.

But wait a second. If humankind is extinct in the production, who is on the stage?

“Ah, to find that out you are going to have to come to the show,” says Kheyfetz.