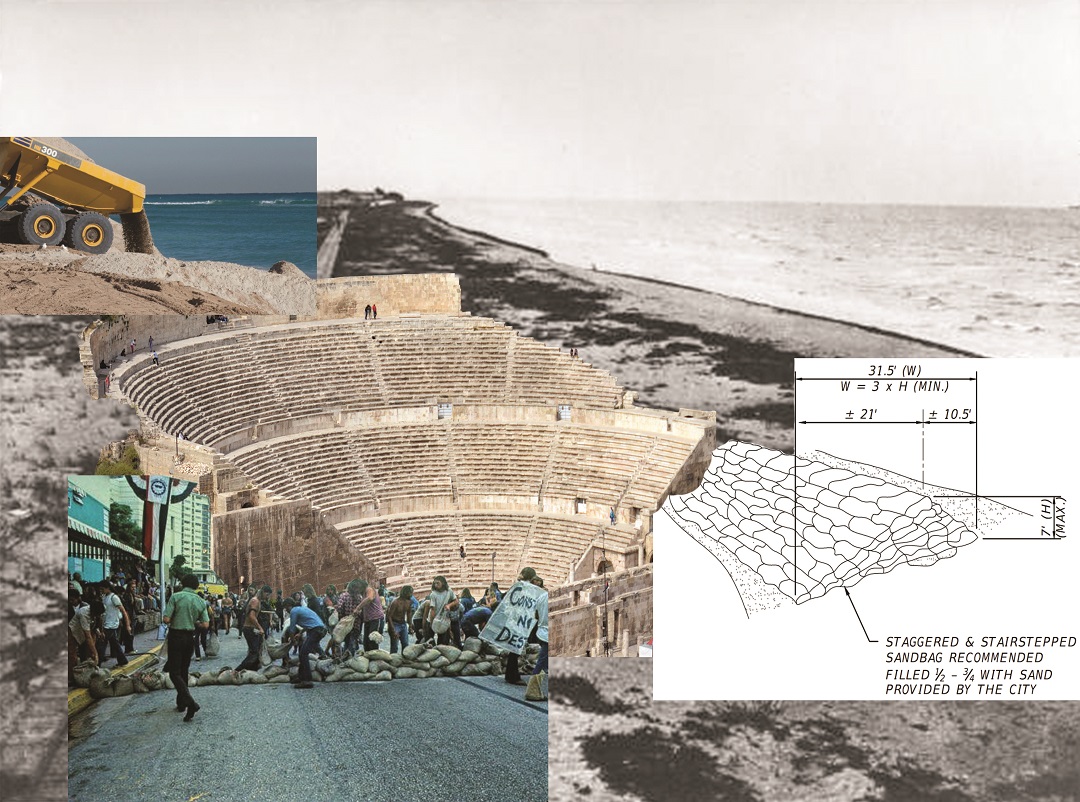 A circular stadium whose height seemed to ascend the farther you got from the center, the amphitheater originated in ancient Greece sometime around the 6th century BCE. Initially created as a venue for tragedies and other plays, the amphitheater eventually became an epicenter for intellectual dialogue – about philosophy, government, art and language were all discussed, and it became a forum from which a broader audience could take part.

“I think a lot of artists tend to go back to the Greeks,” laughs Misael Soto, a visual artist and the ArtCenter/South Florida’s first-ever Art in Public Life resident. “In thinking about the dialectical process, I was thinking about spaces and how they host these kinds of processes. I realized that this classical amphitheater shape would allow for a roundtable discussion or debate.”

The Art in Public Life residency is ArtCenter’s newly established program embedding a visual artist into the regulatory framework of the City of Miami Beach. For the inaugural project, Soto will construct an amphitheater made entirely out of sandbags along the Miami Beach shoreline in Collins Park. SAND, a multi-part installation hosting a series of discussions, performances, and events, is designed to draw awareness and encourage discussion around Miami Beach’s alarming sea-level rise concerns, and prompt its residents to consider: Should we even be here?

History would suggest that the answer is a resounding no. Dredged out of a barrier island in the early 1900s, Carl Fisher built Miami Beach by dumping thousands of pounds of sand along its perimeter. Rampant construction ensued, and Miami Beach quickly became one of the most desirable resorts in the nation. New York’s bourgeois class flocked to Miami Beach in droves. Developers like Fisher and John Collins, eager to cash in on this man-made paradise, constructed towers along the shoreline to welcome even more tourists.

This renegade history serves as the foundation for Soto’s project. Sand – Miami Beach’s most foundational element – also happens to be one of the world’s most limited natural resources. More than 100 years after Fisher dredged Miami Beach into existence, the threat of sinking into the Atlantic is a very real peril for Miami Beach, and sand is the first defense against that disaster. Since the 1950s, the city, county, and state have been forced into a cycle of constant sand replenishment in order to maintain Florida’s primary tourist draw, at a cost of millions of tax dollars every year.

Usually, the City of Miami Beach purchases this sand from other countries, such as the Bahamas, which creates environmental issues on a global scale. For example, over 20 islands in Indonesia have all but disappeared due to the country’s sand mining practices, and many Asian countries have banned the legal sale of sand, perpetuating a black market for its trade.

In developing the initial proposal, Soto had envisioned “repurposing objects that the city already had in their public works department. Anything from people and processes down to more obvious, like objects, was fair game,” says Soto. Soto was paired with the city’s Environmental and Sustainability department in Miami Beach, which has offered financial support for the project alongside ArtCenter.

“A big part of this is having an artist come in and see how government works, and also challenge how we do things,” says Elizabeth Wheaton, the director of the department. “We want a fresh and new perspective on how we’re thinking about challenges while developing a better way to communicate with the public.”

Says Soto, “When I realized sand is a primary resource used to make concrete, it all clicked. Concrete and development, in general, has brought us here.”

Determining that sand would be the prime material for the work – the jumping off point from which the fundamental question of our place within this fragile ecosystem might be answered – Soto decided to temporarily relocate and bag several tons of the Beach’s sand in 11,000 standard flood mitigation sandbags, repurposing them to build this public amphitheater. The seat of thoughtful programming by local artists, writers, and researchers, the amphitheater will be constructed over the course of three weeks, growing taller and changing shape – from amphitheater, to theater and finally, arena. At its culmination, the amphitheater walls will reach as tall as seven feet. At the foot of the installation, a billboard depicting information about the project and inviting passerby to engage with it will be present throughout the exhibition.

Programming will occur in three phases, with local band Donzii performing throughout the course of the installation. During each phase, afternoon-long sessions devoted to arguments and debates around the fate of Miami Beach will take place. Soto purposely drew upon a vast network to facilitate these discussions. In the “Amphitheater” phase on October 28, for example, Soto welcomed Samuel Tommie, an artist representing the indigenous community. “The Seminole and Miccosukee had their own lines drawn that they respected amongst themselves as to who owned what land,” says Soto. “This phase of the program is really meant to question the concept of land ownership and reflects on how Miami Beach was built on a foundation of inequality.”

The next phase, “Theater,” to be held on November 3 in conjunction with the Creative Time Summit, will contemplate the road not taken. “Theater day invites artists to reimagine, what our history could have been,” says Soto. Writers like Nathaniel Sandler and Glenda Romualdo will present a fictionalized fantasy of sorts, and Danish interdisciplinary artist Mie Frederikke Fischer Christensen will also premier a video work that reflects on her time in Miami Beach.

The third and final phase, “Arena,” will present a series of interrogations, debates, and discussions related to humanity’s effect on the earth. Held on November 17, “Arena” will welcome Stephanie Wakefield, an urban geographer who will speak on the Athropocene, known as the period in which human activity has been the dominant influence on the climate.

Architect and artist Felice Grodin, and Wheaton herself will participate in the discussion.

Soto, whose residency will last one year, says SAND is just the start of a series of programs devoted to examining Miami Beach’s urgent sea-level rise issue. “I think its important to note that this is phase one, and the second phase will be another public installation that I’m 85 percent sure will address water itself, with phase three being a kind of publication,” says Soto. Meanwhile, the artist remains optimistic that a Grecian-style forum – one that encourages collaboration among creators, residents, and government officials alike – will have an impact on the way locals approach their imprint on our living habitat. “To me its how we can be here and better,” says Soto. “Instead of throwing in the towel, let’s make work about how we can tackle sea level rise as a community.”