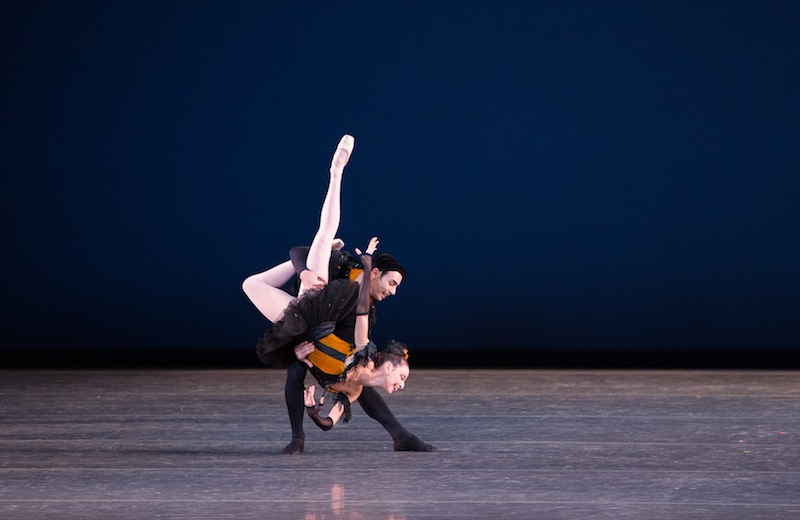 Artburst recently sat down with Miami City Ballet dancer, Nathalia Arja, on a Friday afternoon at the MCB studios. Bubbly and relaxed in pale blue leotard and hair drawn tight in a bun, Arja discussed her approach to the craft of the dance, her recent promotion to principal soloist and her take on the effects of athleticism and technology on ballet’s present and future.

Artburst: How do you think about craft when you approach parts?

Arja: I always like to feel very comfortable in whatever I’m doing so I can play with the steps and add my personality to it. The way to achieve that is to rehearse a lot. I don’t want to step into the role – I want the role to grow out of me.

How do you keep it from getting stale when you are so in the role and familiar with it?

The key is having the role become entirely familiar without getting automatic For the Barber Concerto we did last year I danced the role of the modern dancer and had to get accustomed to making funny faces and even sounds to dance the third movement. Because we rehearsed so much, Rainer Krenstetter, my partner, did not get thrown off by what I did.

Alexei Ratmansky once said about you: “Nathalia is a force. It’s not necessarily that she brings something bad. It’s an extreme situation that she brings. But it also can bring glory.” How would you interpret his comment?

I think he saw in me my speed and energy. For my role of War Girl in the third movement of SymphonicDances he said he thought of this painting he had seen of a tiny little girl on a horse. This role grew out of his impression of that painting. I give it all when I do that role even though I’m not in the ballet until that final movement. When I do appear, I have to explode out there. So when given this chance I just didn’t know how to hold back. I was not familiar with his style and so approached the role without preconceptions.

What possibilities does your recent promotion to principal soloist open up to you?

Currently, my thing is being speedy, but my secret passion is the adagio parts. Because I dance a lot of speedy, energetic roles I find the slower roles fun and challenging. Last season I did that second, slow movement in Heatscape where I danced the point of the diamond. I thought I was in heaven. I told the choreographer, Justin Peck, “You just opened a huge window for my boss to see the other side of Nathalia.” I would like to show that side of me more. I experience joy letting my arms and legs just take me, which I feel doing a beautiful, slow solo or pas de deux.

Recently you gave a ballet lesson to the Patriot’s tight end, Bob Gronkowski. The video on YouTube highlights your athleticism.However, some critics think casting ballet dancers as athletes threatens the perception of the dance as an art. What do you think about that?

What’s so beautiful about ballet dancers is that we can be beautiful and athletic.Look at Balanchine ballet – it’s accessible to audiences because it is athletic.Balanchine broke the image of the dancer in classical ballet by putting everyone in leotards. He made ballet athletic, and contemporary choreographers – Christopher Wheeldon, Alexei Ratmansky, Justin Peck – carry on this tradition. The recent shift to seeing dancers as athletes is an adjustment that has been coming for some time now because Balanchine, years ago, started us down this path.

Do you think this shift towards athleticism creates problems for the future of classical ballets, like Giselle?

No, and for a really simple reason: I believe that a dancer must be able to act onstage and the pantomime we do in ballets like Giselle is super important. The essence of classical ballet is pantomime, which involves talking with face and hands. The audience may even forget they are watching a ballet because they get caught up in the story line and the characters being portrayed with expressions and gestures. Balanchine marks a shift in ballet’s theatricality. After Balanchine ballet dancers speak with their whole bodies.

I see you on Instagram, Facebook, etc. Any thoughts on the role of social media in promoting ballet?

I think it’s great. Think about that Bob Gronkowski video. Suddenly these people that followed football were also following me. The social media presence makes people think ballet is cool. Also, it connects with a younger crowd and even acts as a kind of education. It would be selfish to do my work here and not let the world know. Let’s let people see ballet and social media is a way to do that.

Now, there are negatives. I was taught that watching is learning, and I come from a place that when a principal dancer was dancing no one moved. These days things have changed. During rehearsals people tend to be on their phones. That shows a real lack of respect.

Still, we can’t deny that social media is a great thing because it attracts people to ballet, and it is a way to keep ballet alive.