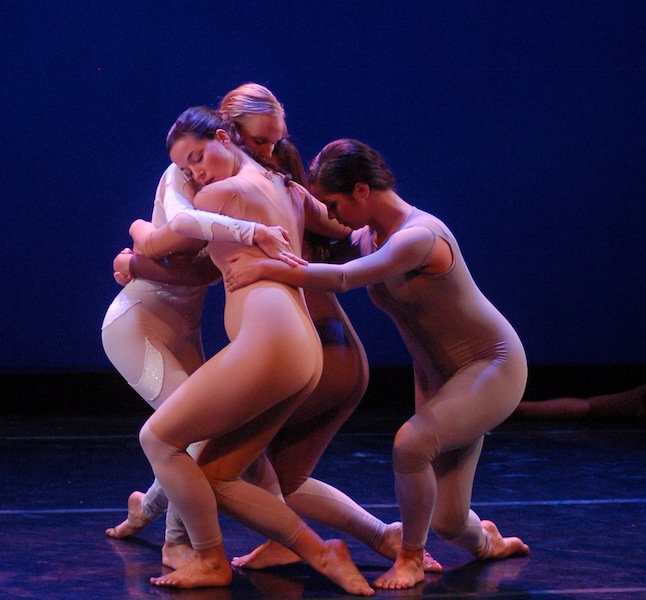 “All our sweetest hours fly fastest,” said Virgil. He could have been speaking of Momentum’s Spring Concert: Hearts, Heroes, Humans. Time flew as Delma Iles, artistic director of Momentum Dance Company, presented us with an afternoon of different states of mind.

The opening piece, Irresistible Pop, the first of three world premiers by Iles, centers around the urge to pop packing bubbles. Dancers, dressed in the universal uniform of jeans and sneakers, engage in youthful play using the packaging as their point of departure. In a game of one-up-man-ship, they dance and chase each other; perform a tango, complete with a popping dip; a dainty ballerina draws the others in a pas de quatre from Swan Lake (minus one). We hear the dance. A soft shoe is sharp and arresting — cartwheels a reminder of childhood discovery of the world turned upside down. Dancers invite audience members on stage to dance, explore and have fun; and, while they are at it, pop some bubbles.

Monkeybone and Merchant, with music by The Carolina Chocolate Drops, together make up Form Follows Man, the second world premiere by Iles. Monkeybone is a sociological study of a gypsy character. There is a biting undertone to the carelessness in the syncopated movements of the body. Barbie Freeman delivers a loose, devil may care, performance of a character who is at home in her own world, if not in ours.

Merchant, performed by Jacqueline Lopez and Reshma Anwar, is a take on disaffected youth – who are completely of their time. Friendship is taken lightly and carelessly. They support each other — until their don’t. One dancer turns, her arms opened wide, maybe in release of any true human connection.

Lamentation takes over the stage in Dido, Iles third premiere on the program and performed to the music of Henry Purcell with costume by Marilyn Skow. It fills the stage in the form of a black veil ceremonially carried on and laid out by a silent Greek chorus dressed in black. Barbie Freeman is compelling in her portrayal of Dido, Virgil’s anti-hero, whose angst at her abandonment by Aeneas is the core of this poignant piece. The veil is her partner, now gone; her anger, stirring fires within her; her lament, seeking an escape, and finding only heart wrenching despair; her shroud covering her, awaiting her.

There are moments of brilliance — Dido pushing again the veil that completely covers and restrains her as the chorus bears silent witness to her anger and despair. She is a figure consumed and when the veil falls to her feet, she stands alone, as a Phoenix-in her own ashes.

Anna Sokolow, a legend in American modern dance, was in Miami in 1985 when she choreographed Poems of Scriabin for Momentum Dance Company. It’s as timeless as the score by Alexander Scriabin, and movingly played by guest artist Alan Ngim. With a trio composed of Jacqueline Lopez, Rebecca Pelham, and Reshma Anwar, it’s melancholy, as if they shared a sad secret. They are almost always intertwined, releasing each other only to reconnect. There is a strong bond connecting them. The weight of their secret seems to cause each to collapse, each in her own time. Throughout, we hear a collective sigh. Theirs is a burden which must be carried and shared. They sit by the piano, listening as Ngim’s music fills the stillness of the stage.

Birds of the Inner Eye, a work by Iles from last season, with music by Oliver Messiaen and played by Ngim, is the result of a trip Iles took to the Seattle Art Museum in 2014. There she was inspired by the paintings of the artists of the Pacific Northwest School. “The works contain a delicate spiritual quality while also managing to be strictly disciplined,” says Iles. Birds of the Inner Eye is a composition based on the natural environment of the Pacific Northwest and Asian aesthetics. It seems to explore the nature of consciousness in dream like segments performed reverentially by the dancers. We hear their breath, the depth of a sigh as the dancers change levels of consciousness. At one point, several dancers cross the stage in pique turns, then link arms, moving forward in unison as one dancer remains seated, her back to us. They wrap around each other, moving across the stage as one body; others join the seated (then prone) dancer. Together they rise and move, with backs to us, to an unseen edge, heads lowered, arms outstretched, as if to take flight.

Iles gave us an afternoon rich in human experiences, which ended all too soon.

Momentum Dance Company will present an evening of Water Ballet on May 19 at the National Hotel, Miami Beach; www.momentumdance.com.