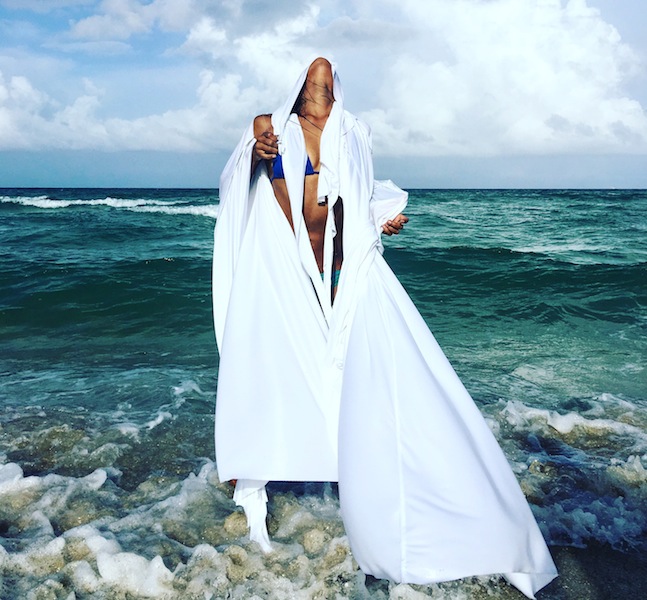 On the surface, rising sea levels and dance seem to be worlds apart. Unless you’re Marissa Alma Nick, who grew up in Surfside — going to the beach and watching such movies as Waterworld and Deep Impact. “These images were strong in my mind growing up,” explains Nick.

The two topics come together in Mira El Mar, a look at Miami a century in the future and how two women, who have survived the effects of climate change, are now living with their new reality. It is a timeless tale, one of change and adapting to different circumstances, when the known is a part of the past. Nick describes the work as a piece on the “humanity of people who don’t want to leave their homes and want to evolve and find a new way.”

The piece, set on the beach, is a “directive to the audience and also [to] a state of mind — to really look at what’s happening, and not turn away from it. Meditate on it and think about it, “says Nick. The idea for the piece was sparked by a children’s measurement stick of the rising sea level that Nick saw behind the community center in Surfside. This was a catalyst for Nick to develop her ideas on the effect water changes would have on Miami. She spent months on research before beginning her choreography.

Working with the elements can be challenging. Nick faced ever changing conditions each rehearsal: shifting sand, change in temperature, the wind, the water level. The movements of the wind and water provided the music for the piece. “The [ choreography] process had to be flexible and fluid — like the water.”

Out of this Nick created her “goddesses of the future,” performed by Sasha Caicedo and Juliana Triviño. They tackle their new environment dressed in garments designed by Sebastian Ruiz, which at times act as protection from the water. A sculpture, also created by Ruiz, serves multiple purposes to the dancer; as a hut and a raft. They are faced with the vastness of the ocean, the mood of the wind, and the shifting sand beneath their feet. At any minute, everything is different.

Mira El Mar is the result of a fellowship grant from Pioneer Winter Collective’s Grass Stains project. Nick is one of five artists to receive this award, which is a mentorship program to develop and implement a site-specific performance anywhere in South Florida. Winter, a Miami native, explains that if you “remove the barriers, you are more able to interact with the audience.” Grass Stains fellows are given a mentorship with Stephan Koplowitz, a choreographer who specializes in site-specific performance. Koplowitz is the recipient of a Guggenheim Fellowship as well as a “Bessie” (New York Dance and Performance Award). He helped guide the artists in the selection of their sites. Nick immediately thought of the beach and created a piece which, in the words of dance critic Marcia Siegel, “is an event that disappears in the very act of materializing.”