Micro Theater Is Hot For the Summer 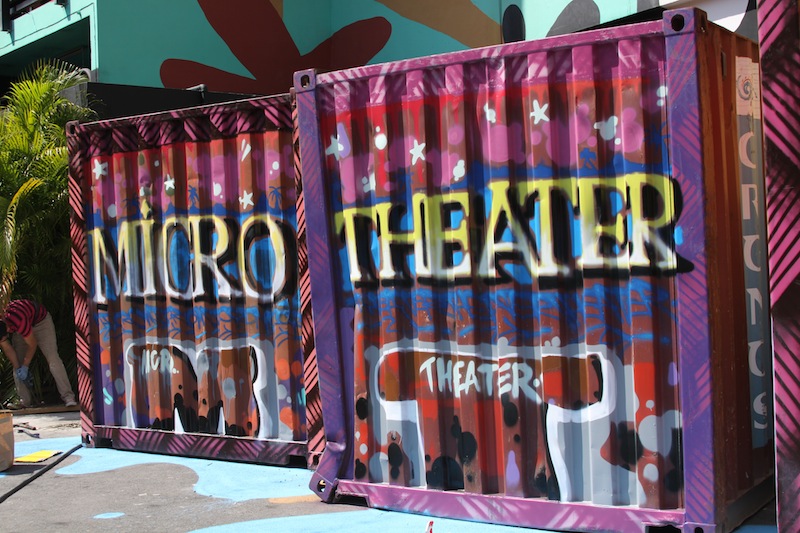 Bite size portions of theater, fresh writing and some well known actors, all available at a reasonable price in an intimate, unusual setting has turned Micro Teatro Miami into one of the longest running, and perhaps most unlikely hits, in South Florida’s cultural scene.

Using seven shipping containers parked on the open loading dock behind the Centro Cultural Español (Spanish Cultural Center) as ready-made mini-theaters, Micro Teatro offers a program of 15-minute plays Wednesday through Sunday. Tickets are $5 per play, and each work is presented six times a night, with a brief break, in a continuous session.

The evolving programming now includes plays in Spanish and English, a late-night Golfa (Rogue) session on Fridays and Saturdays, and the Dynamic series of unscripted theater. Micro Teatro’s “seasons” run for five weeks and their themes are set to complement the ongoing programming at the Center.

This month, the overall theme is Porque Miami Is Different. And if you’ve missed previous programs, in August, Micro Teatro will offer The Best of Micro Teatro, a month-long program of one-week reprises of the best plays offered this year.

“Micro Teatro has become one of the main activities for the Center,” says Francisco Tardío, director of the cultural center. “We are very proud of this project because it has worked at many levels: It is developing new audiences for theater in Miami because it’s a low-risk, inexpensive but creative proposition. But it’s also giving actors, writers and directors a space to experiment, to do things that maybe the cost of a conventional production wouldn’t let them try out. And also it has converted a private loading dock into a public space, a meeting place, and it’s generating work.”

Spanish producer Jorge Monje — who was part of the original group that started Micro Teatro por Dinero in Madrid in 2009 and is the director of Micro Teatro Miami — says he also wants Micro Teatro to become “a place of encounter for the theater community in Miami.”

“I would like Micro Teatro to become the place where theater people come see peers and also a place where the people who love theater can find information about all that’s being offered in town.” As part of such efforts, in June, Micro Teatro invited several South Florida theater companies to take over the containers. Participating groups included Havanafama, Fort Lauderdale Fringe, City Theatre, Trail Theater and Teatro de Bellas Artes.

The greatest challenge for Micro Teatro remains reaching the English-only speaking audiences. While the offerings have been there “and audiences have been growing bit by bit, it remains a challenge,” says Tardío. “It’s been a question of marketing, publicity and finding the right media.” Interestingly, he says, mixing in the same plays in English and Spanish was not well received. “We found out that people prefers them separate,” he says.

As for the marketing, both Tardío and Monje concur in that while Micro Teatro has largely depended on word-of-mouth for its publicity, the participation of actors, writers and directors working in Spanish-language TV in South Florida has been key, not just because of the name recognition but their efforts in promoting Micro Teatro to their fans.

Argentine actor David Chocarro, a Spanish-language TV star best known for his roles in telenovelas such as “El Rostro de la Venganza” and “Villa Paraiso,” has participated in Micro Teatro Miami as actor and director, collaborating with his wife, actress and playwright Carolina Laursen. “It’s an incredible experience to have the audience so close, to feel even their breathing,” says Chocarro. “And I believe for the audience is a similar experience. They are right on the play.”

Also, as an actor and director, having to repeat the performance so many times before so many different audiences, encourages, and allows for, continuous changes and adjustments.

“What happens is that the play takes on a life of its own and it’s enriched by each performance,” he explains. “How the play ends up in the last show sometimes has nothing to do with how it started.”

“For an actor, these performances are an excellent workshop,” he says. “You get six different audiences every night and in every performance you have a chance to try things, maybe improvise a bit. Some things work, some don’t, but that’s how it is.”

He also notes that the setting at Micro Teatro allows for an interaction between actors and audience that is rare for a TV figure. “At the end of the play, people stay around and talk to you, comment on the play and maybe ask to get a picture with you,” says Mateos. “And getting closer to your audience is something very special.”