Miami Performance International Festival Returns With Another Bucket of the Unexpected 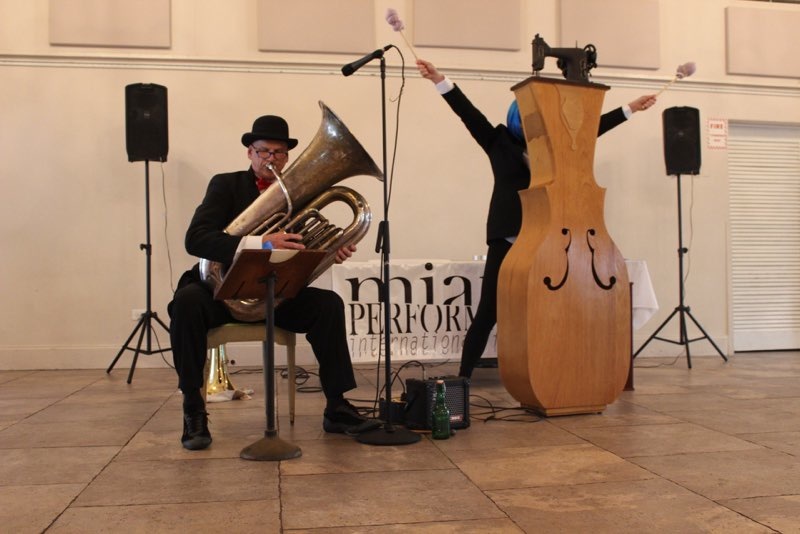 With a heightened emphasis on “Noise” as an innovative musical genre, this sixth installment of the Miami Performance Festival International (M/P’17), running June 23 to 25, challenges South Floridians to a riot of styles and mediums that should intrigue, offend, astonish, and titillate audiences.

In her Allapattah gallery’s office, a week before opening night, founding director Charo Oquet balances eagerness, stoicism, and anxiety, as she reviews her checklist and welcomes artists.

Friday and Saturday schedules of live sound, video, and performance will commandeer Edge Zones’ in-and-outdoor gallery spaces, which accommodate extravagant, messy installation and edgy, loud, late night sonic adventures. Last year, in a cathartic “ritual,” artist J. Jiménez smashed plates against the walls – each carrying a prayer or grievance. “Performance” in this context is different from a concert or movie-going experience. There’s often an element of confrontation. It’s communication, not entertainment, suggests Oquet. “It can be entertaining, but that’s not its purpose.”

On Sunday afternoon, Miami Beach Botanical Garden ideally suits varied forms of dance, experimental sound, procession, and hide-and-seek among luxuriant plantings. Its lush turf is perfect for ground-based movement (as when Jessica Hirst rolled across a sea of raw eggs).

Oquet’s own artistic career of installation and performance spans 30 years, grounding her role as impresario in practical experience. So has motherhood, she jokes!

“One thing about performance art is that the artist is present,” she says, “and this is one of the reasons I got into performance art [and] staging festivals. It’s not just about the art, it’s about the artist.” Tolerance for nudity and personal issues of body image, gender identity, and politics are hallmarks of the performance community and essential to Oquet’s mission. So are mutual support and mentoring.

Oquet’s call for proposals is international, and she has hosted artists from around the globe. Her own roots are in the Dominican Republic, where she has repeatedly performed and generated cultural exchanges. She emphasizes a post-colonial New World vision, which privileges the Caribbean, Central and South America. “We are trying to find out who we are away from the ways of Europe, away from what they think we should be,” she says.

Regional representation is equally vital – both for cultivating talent and generating audience. Locals bring their friends, who are then exposed to practitioners from outside. This year, artists are arriving from Cuba, Chile, Canada, Germany and the Dominican Republic. Two young musicians, active in the D.R.’s experimental scene, are benefiting from a Miami residency – making contacts and learning the administrative side of festival production.

Mainstream arts producers, who are generally risk averse, tend to shun performance, which Oquet calls the art of uncertainty. “You have to find a balance,” she continues. “You want them [the performers] to be a great artist, but not set fire to the place.”

To mitigate risk, she advises the artists, “You’ve got to tell me exactly what you’re doing. I want no surprises.”

But as a performer, she understands the flip side. “You might have a sketch of what you plan to do, but a lot of it changes as you go live.” Sometimes inspiration shifts upon viewing the setting for an installation, which then calls for brighter color, larger elements. Or, audience response may push the performance in an unanticipated direction.

The International Noise Conference (INC), whose regional “guru” is Frank Falestra (aka Rat Bastard), was Oquet’s entree into the Noise genre, and Falestra is Friday’s “Noise Night” curator. And a prized performer. Churchill’s is the INC’s regional headquarters, and Falestra has invited several artists from their roster.

Guitarist Bill Orcutt grew up in Miami, then moved to California. He may go acoustic or electric and switch from extended drones to jittery, a-rhythmic melodic runs and clattering stops. Pocket of Lollipops, a poetic, pop punk band and visual artist David Brieske (aka Fsik Huvnx), who mixes bowed guitar and electronics, are among the Miami-based Churchill’s regulars. Muu Blanco, Pip and Duane Brant, Sarah Valdez, Maria Therese Barbist, and Pia Toribia – will join other visual/performance cross-over artists.

From Chile, Gustavo Solar brings NSFW aesthetics that may thrill some and disgust others. This is characteristic of prior festivals, which have included confessional storytelling, intrusive body contact, fire-dancing, studding an apple with pins, and dripping water “torture” – but also cake eating.

Returning to her list, Oquet extends a welcome: “If you are looking for something to make you question how you think about art and music… this is the place to come.”