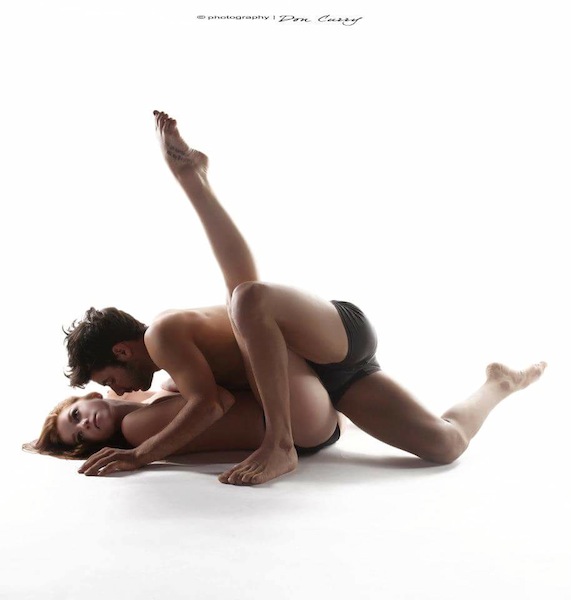 Miami has a strange way of creating those what-did-I just-see unexpected moments. Like the first time I first drove into Wynwood and saw what happens when a nuke gets set off in someone’s imagination. It occurred again Sunday, March 1, when I arrived at the Little Haiti Cultural Center (212 NE 59th Terr.) to see the 9th Dance NOW! Miami Open Stage event.

Had I known, I would have made the trip just to see the surprising architecture, the colorful murals, the vigorous African dance classes in excellent studios. But it was the Miami Open Stage itself that made my new discovery especially worthwhile.

As Dance NOW! Co-Director Hannah Baumgartner explained the event, each of the featured performances by the Miami choreographers were “works in progress,” and breaking down the fourth wall with a question and answer session after each piece would be an important adjunct to the afternoon’s performances.

Josie Gulliksen of Artburst showed particular skill as midwife to these question sessions with the individual choreographers, allowing uncomfortable moments of silence to just happen as everyone’s thoughts were organizing. Without exception, the subsequent exchange between audience and choreographers enhanced the performances that had just taken place.

For instance, Megan Holsinger’s piece, Covetous, was structured around two parts. In each movement dancers intriguingly mirrored one another’s patterns interrupted by occasional brief solos. However, at the end I struggled to see the relationship between the first and second part. During her questions, Holsinger asked us to think about the dancers as avatars of the same person, transforming the feeling of “I’m not quite sure” to one of  “I get it.”

Opening in silence and subdued blue light, Samantha Paxos’ piece, Moments before…, intrigued immediately with its repetition of striking gestures that ranged from defiance and bound hands to one motif where she grasped her own neck from its nape as if being hung. Though I found the piece evocative, the context of movements like these escaped me until Paxos herself added how the gestures were, “compiled from photographic images discovered during her interviews of Cubans both on the island and in exile.”

The first moments of Angela Freger’s polished Alapse viscerally engaged with childlike movements set to an adaptation of the pop classic, Heart and Soul. Here the question session served to confirm the rite of passage narrative behind the shifts in the choreography. Opening with a youthful unity, the piece undergoes disruption, imaged through one dancer’s frantic solo, before resolving into a final, more expansive whole.

Christopher Rudd’s masterful, …I See, began with soloist Kristin Zaidner drawing with her finger on the stage in black leotard and grey sweater open at back. Apparent in her movements was an emphasis on continuous flow and smooth transitions as squats and tight-seated positions unwound into turns and small jumps. Set to Chopin, her movements formed a fine counterpoint with the piano, so much so it left me wishing I could experience the piece again with a live musician.

As Rudd took his turn with the Q&A, something that choreographer Carolyn Dorfman had said to me during a recent conversation seemed to fit the event structure perfectly. The opportunity to respond to the performances allowed the audience to become “another member of the choreography — [with] the interior lives of each audience member manifesting themselves as part of the event.”

The day closed with the teaser Short Stories, from the Dance NOW! Miami company itself. Clearly polished, it previewed the upcoming performances of the company on March 21 at the North Beach Bandshell, and on March 27 and 28 when they will present Carolyn Dorfman’s Odisea at the Fillmore Black Box Theater.