In 25 years of performing George Balanchine’s “The Nutcracker,” Miami City Ballet principal Tricia Albertson has been the Sugar Plum Fairy, Dewdrop, a waltzing flower, and confections of Spanish chocolate and marzipan. Those credentials already make her an ambassador from the Land of the Sweets. But add to them a snowflake, a dancing doll, a genteel hausfrau, and a ready-to-party grandma in Act One’s Stahlbaum-family Christmas festivity, and that certifies her all-inclusive view of the holiday spectacle, a yearly ritual MCB will bring back to South Florida stages beginning its run at the Arsht Center on Friday, Dec. 16.

Considering what makes “The Nutcracker” a ballet unlike any other, Albertson credits the sparkling craft and joyous spirit that conjures up the marvels of childhood. And, for a ballerina, she says, “Every year it’s great to revisit it and try to find new aspects.” Other fine works that come up, at best, a few times in a career simply don’t afford so much repeated opportunity. 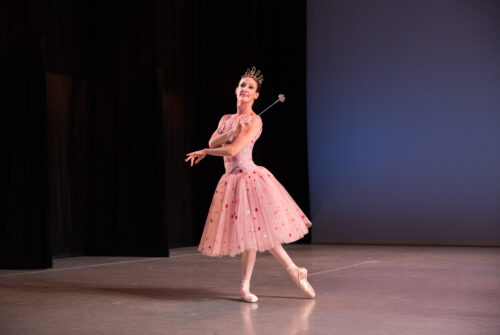 Albertson estimates she’s danced the Sugar Plum Fairy around 70 times throughout 17 seasons, which makes it—well, the plummiest of plum roles. The fairy drives the action in the beloved second act: her raised-lights entrance and solo as the guardian of the Angels (little girls from MCB School); her welcoming of Marie Stahlbaum and the Nutcracker Prince before overseeing diversions in her high-calorie queendom, and the culminating pas de deux with her Cavalier.

That lovely pairing puts the royal icing on the ballet with the scene’s sweep of leaps and pirouettes: Its peaks of ballerina run-jumps onto her consort’s shoulder and one top-tier balance when Sugar Plum lets go of the Cavalier‘s steadying hand and, firm in arabesque, claims the pose on pointe solely on her own—in case anyone had any doubts as to who rules the roost here.

Among all of Albertson’s partners, Sugar Plum’s Cavaliers hold a special place. Standing out as her first one was Didier Bramaz, a friend from their time at New York’s School of American Ballet, who “had a very calm presence that helped me feel grounded. I also danced with Reyneris Reyes for many years, and we had a unique chemistry I loved. I knew he was always there for me.”

This year she’s partnered with Steven Loch, only in his second season with the company but experienced in this part from a decade at Pacific Northwest Ballet.  “We did our roles together last year and from our first rehearsal, everything worked,” Albertson says. “We have the same musicality, which makes it easier. He’s also taller than lots of guys I’ve danced with, so I feel well connected.”

Still, Albertson points out it’s when Sugar Plum first comes on the scene to herd the Angels that eases her—after long weeks of rehearsals—into the luminosity of the role. “It’s one of the nicest touches Balanchine put in,” she says.  “The ballerina gets to look at all those children around her, and the magic takes the nerves away.” 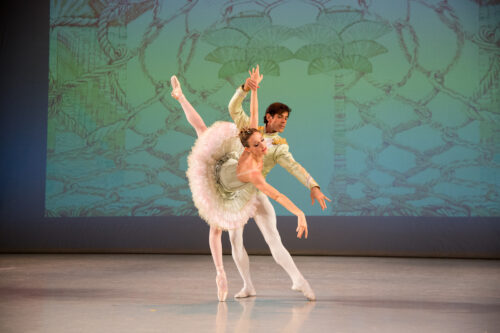 Since she joined MCB as a coryphée (pre-soloist), Albertson hasn’t missed a single Nutcracker run. “I played the grandmother at 17, the youngest dancer doing the oldest character,” she recalls.  And even while getting over an injury in 2019, she acted in Act One’s party scene as Frau Stahlbaum. Naturally, she’ll never forget the 2004 shows in which she first danced Sugar Plum, the butterflies in her stomach soon turning into a commanding ballerina’s wings.

Nonetheless, early in her career, Albertson sometimes preferred dancing Dewdrop in the Waltz of the Flowers. “I had more power in my legs then and loved all the jumping and fouettés.  But I came to learn there’s so much more to this piece—so grand, so beautiful—which lets you fly to the music with the corps all around you.”

For the current production, Albertson is also coaching the snow scene, which closes Act One and signals the fantasy to follow. Not that there’s any shortage of hocus-pocus in the previous sections, which include a Christmas tree growing into a colossus, toys battling comically menacing mice, and the mysterious Drosselmeier, who not only fixes a broken nutcracker but devises transforming it into a prince to gladden Marie’s heart. 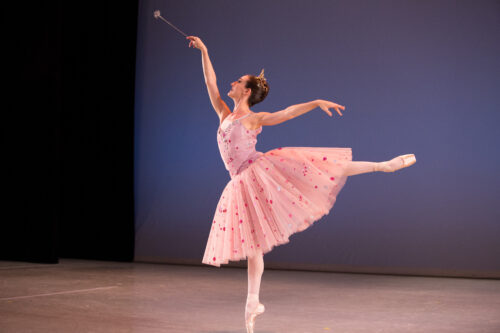 “Staging Snowflakes has brought back how hard this is for the ballerinas—the hardest thing in Nutcracker, I’d say, with that amount of jumping and fast pointe work,” judges Albertson. “And it has to be perfectly in sync, or the charm’s not there.” She tips her Sugar Plum’s tiara to all those diligent corps members who stay on tireless duty through a half-month-long run.

Of course, she also recognizes the support of the score, with “musical cues, little twinkly sounds making you think of snow and how light you’re supposed to be on your feet. It’s fun to read into that different intentions—certain steps I feel like snow flurries, and others like shards of ice, almost dangerous.”  She laughs noting she grew up in Santa Cruz, Calif., has lived in South Florida most of her life, and for her by now “snow is a foreign concept.”

But it’s true Tchaikovsky’s score brims with dramatic suggestion.  Though many of its selections have become clichés we hear in seasonal TV commercials, shopping at the mall, or driving to a workplace party, those are only trivial ghosts of sound. Animated by live orchestra, the music regains a robust presence that—teasing, caressing, arousing—leads us to a realm of wonders.

And we love to keep going back, the pleasure not lost on Albertson’s close friend and fellow principal Jennifer Lauren—herself a Nutcracker trouper since her days at Alabama Ballet, among only a handful of companies licensed to stage Balanchine’s work, which debuted at New York City Ballet in 1954 and MCB adopted in 1990.

In the midst of readying her own interpretation of Sugar Plum alongside Renan Cerdeiro’s Cavalier, Lauren attests to the primacy of “The Nutcracker” in the repertory and to the deep-seated grace of Albertson’s portrayals.

“This ballet is like a family member I get to hug every Christmas,” Lauren says, acknowledging the work’s noble values. “And Tricia is someone I’ve always looked up to. By nature, she keeps things light and loves to laugh. She’s so serene. And that shines in her dancing.”

Sorting through Nutcracker memories, both splendid and quirky (once in Clearwater, a fist-fight broke out in the audience, but to great applause the show went on), Albertson can retrace her remarkable artistic journey as she draws near retirement, which comes especially early for dancers. Other gems from choreographic masters and premieres from young creators have brightened her way. But, among these blessings, the yuletide classic remains a constant gift.

“Whether I’m performing or watching from the front, it always strikes me how free and big this show is. Nothing about it comes off as stressful,” says the ballerina, offering the best description of what everyone needs right about now.