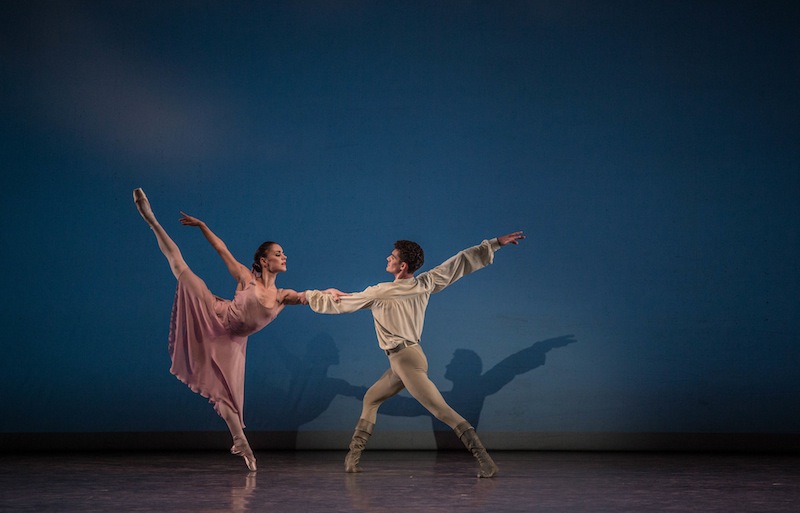 Miami City Ballet will conclude its season this week with a rich selection of repertory pieces: two from Balanchine, in very expressive but distinct modes, and one from modern-dance master Paul Taylor at his genial best. While company premieres this year have upped expectations and trumpeted growth, the current program reconfirms the quality of the company’s long-held artistic assets.

Balanchine, of course, remains the brightest sun in the MCB universe. But from early on this company has also gravitated toward contemporary choreographers, especially warming up to Taylor. Friendly to the stride of ballet, his Arden Court lets these Balanchine-centered dancers make their own spin on the material dazzling.

“This is my first time dancing Arden Court. The music is gorgeous, and you must move very fast to it,” says corps member Andrei Chagas, among the six men—accompanied by three women—who ride this winged creation at a gallop, to sections of symphonies by 18th-century English composer, William Boyce.

Chagas found a bridge to his work through a previous casting in Mercuric Tidings, another lofty Taylor choreography. “The presentation is very squared off,” explains Chagas, “and the pull downward defines it.”

Mornings after dancing this piece he’s felt the difference in his muscles, needing to shake off the tightness in his calves. “The use of the quads, too—relying on their strength—shows the roots of this movement are in the ground,” he says. Yet he must also find impulse for flying leaps, which “makes things more complicated!”

Observing his fellow dancers in action has additionally helped Chagas. “As a viewer I’ve better understood this as a comic ballet,” he discloses. “It’s very joyful, and in all its elegance there are jokes.”

From the Balanchine trove of tutu-and-tiara delights this program also brings Divertimento No. 15, which manages to be both rare and exemplary. The Russian-born master often made dances to scores by his countrymen, but in this case he relied on Mozart to propel a musical genre identified with amusement into the realm of exaltation. Somewhat abbreviating the score for strings and horns, the choreographer relayed its ebullient spirit—not without reflective passages—to uphold ballet’s noblest qualities: graciousness, sophistication, and verve.

Patricia Delgado, a ballerina who sparkles through skill and personality, will be dancing the fourth variation in Divertimento, and—especially suited to her talent for allegro—this provides a fitting way for her to bid farewell to MCB after a 16-year career, as she will be retiring. “This is right up there among my favorite ballets and has a special place for me since I did its first variation when I was very young,” says Delgado. “I feel the part I’m doing calls for more maturity, which I can bring to it now.”

The distilled classicism of the work speaks to Delgado, who points out, “it’s technically hard. The turns at the end come when you’re already tired. They have a little twist, and you have to keep the rhythm while the music speeds up. But this is also witty and full of charm. Such a gem!”

Her variation, moreover, carries a bit of history that adds to its significance. As Delgado explains, in 1956 Balanchine choreographed it for his wife Tanaquil Le Clercq—a supreme interpreter who not much later contracted polio, making an abrupt end to performing, at the age of 26. “Balanchine poured lots of love into this dance,” Delgado says. “I can really relate to the sensuousness of it.”

The ballet’s unusual structure, with five principal ballerinas attended by three men, backed up by an eight-woman corps, also allows Delgado to mark this special occasion alongside a wide representation of her artistic family. “I’m happy I get to take the stage with so many of my best friends,” she says.

And that kind of amiability will continue on the dates Delgado dances in Balanchine’s Who Cares? To a suite of orchestrated George Gershwin songs, couples here come and go, soloists swing through, and spirited groups share the fun—all like jazzy pilgrims on a swanky night out on the town. This builds layer upon airy layer of playfulness and romance. But, no mere puff pastry, the dancing fortifies the heart.

“It was the first ballet I performed as a company member,” recalls Delgado, who by now has gained enough experience—in life as in art—to fully embody the devilish wit of “Fascinatin’ Rhythm” and the entrancement of “The Man I Love.” That latter selection especially excites her at this juncture.

“I’ve been listening to Ella Fitzgerald,” says Delgado. “Her singing has let me go deeper into the emotion, and I can relate it to my feelings for Justin.” That’s New York City Ballet resident choreographer Justin Peck, her romantic partner, whom she’s about to join full time in the Big Apple.

Yet Delgado reveals she wants her dancing in Who Cares? to be a double valentine, in further appreciation of another man: her dance partner Renan Cerdeiro. It’s collaborations such as theirs that have made the long list of pas de deux in Delgado’s glowing résumé so memorable.