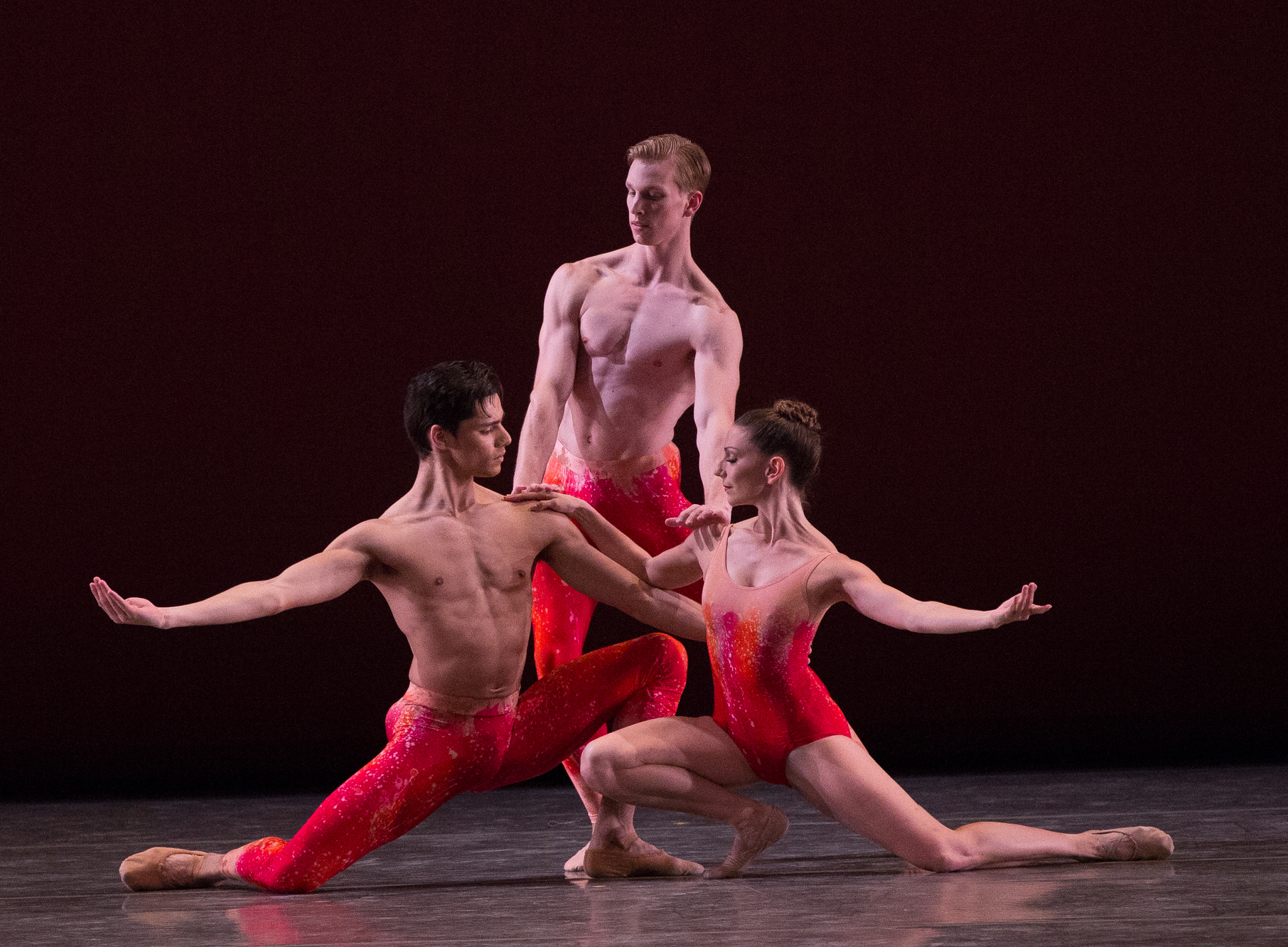 Opening its season at the Arsht Center on October 18, Miami City Ballet will put dancers through such quick, bustling paces they’ll seem to spark off the floor.  In the current search for alternative energy scientists would do well to harness that power. Audiences in the meantime can enjoy three highly charged ballets on a program that’s sure to brighten smiles and light up the soul.

Not only vigor but also variety enlivens this show.  Ballet here comes calling in different guises. It’s jazzed up for a Broadway flirtation in Slaughter on Tenth Avenue; florid but robust to lift Mercuric Tidings, a solid modern dance; and radical throughout Stravinsky Violin Concerto, whisking neoclassicism off to extremes. Each piece gains shape from its score as if by divine intervention. Except divinity in this case belongs to the choreographers.

George Balanchine, whose ballets are a mainstay at Miami City Ballet, zestfully applied his genius to American musical theater within a mere three years after arriving in the United States. A stint with the Ziegfeld Follies was followed in quick succession by his contributions to four Rodgers and Hart musicals, starting in 1936 with On Your Toes, a send up of ballet-company rivalries that bring in the mob. Frivolity notwithstanding, this became a landmark in theater history by including the choreographer in the credits for the first time and using dance not merely as ornament but as a plot element.

Slaughter on Tenth Avenue was thus born as a rousing dance episode in On Your Toes.  Plucked out and reworked by Balanchine for New York City Ballet in 1968, the spirited caper at a cabaret—hunky Hoofer goes for Striptease Girl, jealous Big Boss goes for the gun—has remained a fun ride ever since.

“This is a different thing I’m learning to find comfort in,” says Emily Bromberg, a newly promoted principal soloist who landed the lead female role in Slaughter. She didn’t grow up as a Broadway baby since ballet was always her family’s theater outing of choice. Yet now being in the midst of a good old showbiz yarn has expanded her performance skills.

Though it’s her first time as the Striptease Girl, Bromberg has had her eye on this slinky character since MCB last staged Slaughter in 2013.  “Even when I was in the corps,” she reveals, “I was learning about the part watching at every rehearsal.”

She appreciates what different ballerinas have done but singles out former MCB principal Patricia Delgado—an effervescent interpreter—as a special inspiration.  Still, from overall projection to tricky details like strategizing turns and jumps in high heels, Bromberg emphasizes, “This is something you truly get only by doing it yourself.”  A role, she recognizes, must fit like a second skin.

For Bromberg, being partnered by Renan Cerdeiro has been “like a dream.”  His experience with Slaughter and natural warmth put her at ease.  And the ballerina adds, “He’s also very handsome, so easy to be in love with!”

That role of the smitten Hoofer calls for non-stop stomping in the closing scene, requiring a tap dancer with true grit.  Luckily, in Chase Swatosh Miami City Ballet has the real thing.

“You just can’t fake this,” says Swatosh, who leads the second cast. He’s thankful for the nine years of tap classes he took in his native California from Darryl Retter, the head of a well-respected dance academy.

Beyond the display of tap skills, Swatosh also has to figure out how to dress up steps from the classical lexicon in jazz, trusting his ingrained technique. In the process, he’s profited from watching past performances. “They can only be helpful, even when I’m not choosing what others have done,” he says. “The extent of possibilities—a different lens—helps define my approach.” The end result, he contends, has to be his “learning the piece inside out.”

Ballet credentials in hand, Swatosh will further partake of Mercuric Tidings, Paul Taylor’s choreographic feast from 1982. “The dynamics here,” says the dancer, “keep you at the edge of your seat.”

To sections of Franz Schubert’s luscious first and second symphonies, the dancers dart, glide, and fly off through warm latitudes in the opening and closing ensembles, nesting with one-on-one intimacies in between. The rosy bloom on the work gets a wistful perspective—and no wonder since the choreographer comes at this as a mature master using music composed by Schubert while still a teenager.

Swatosh feels fortunate to perform the piece again after MCB’s last staged it four years ago. “Whenever I go back to dancing something, there might be little things I want to change,” he says.  “I always keep striving and hope I’ve grown, knowing a dance and understanding my body better. The goal is to move ever more efficiently.”  In Mercuric Tidings, he explains, the challenge lies in maintaining a clear musicality throughout the choreography’s multi-directional momentum.

While not aloof to the resources of her balletic gifts, Bromberg stresses how adding more grounded volume to her movement serves Taylor’s style. She likes to echo rehearsal coach Patrick Corbin’s statement that the shape is in space and the dancer has to fill it. Directing her force into those fleeting forms, she can illuminate them. And, paired once more with Cerdeiro in a central duet, this ballerina who works magic in adagio is sure to release a flock of emotions from a calmer tempo. So, will that look romantic?

“I see connection,” says Bromberg. “Audiences, of course, can interpret it their own way.  Often you see what’s happening in your life. This is a couple with a strong bond—read that as lovers, friends, or two people on one of life’s missions.  And there’s solidarity in their energy exchange.”

When it comes to creative mission and the artful distribution of energy, there’s no greater model than Balanchine’s Stravinsky Violin Concerto. Like a mathematician dancing out figures across a blackboard to prove a theorem, the choreographer renders inversions, equivalencies, and multiplications of movement on stage as if to validate the stark beauty of ballet’s evolution.

“This is a masterpiece,” says Colleen Neary, co-artistic director of Los Angeles Ballet and former NYCB soloist who’s come down to teach the work, having danced it in the 1972 premiere during a now legendary Stravinsky Festival.

“Balanchine choreographed this as a celebration for his good friend, and his motivation carried over to the dancers,” Neary points out.  “It was way ahead of its time and to this day a challenge to teach and replicate.  But the movement is fascinating.”

This is Neary’s first time setting a work on MCB.  She not only looks forward to working with a company of accomplished Balanchine specialists but is happy to return to the place of her birth and family roots.  And her intimate insights should prove invaluable in fleshing out the knotty steps and poses in the ballet’s four movements, with opening and closing ensembles that cup two pas de deux.

“Balanchine came to rehearsal with extreme dedication and inspiration,“ recalls Neary.  “He choreographed quickly and was done in one week. He told stories of himself and Stravinsky.  Their relationship—and love of food and drink!—is especially reflected in the finale, which in places he called The Russian Tea Room.”

Through folkloric gestures, which stand out in a stringently innovative work, that last part harkens back to the paired artists’ shared heritage. It’s a salve to soothe the viewer’s heart after the thrills of so much brainy calculation.

“To this day I remember the opening night and how the audience took to this,” says Neary, her memory of applause predicting imminent ovations.

Photo credit above: Chase Swatosh at center with Ashley Knox and former MCB principal Jovani Furlan  in Mercuric Tidings.  Photo © Daniel Azoulay.
ArtburstMiami.com is a nonprofit source of theater, dance, visual arts, music and performing-arts news. Sign up for our newsletter and never miss a story.