Miami City Ballet’s 2019-2020 season-opener “Slaughter on Tenth Avenue,” debuted October 18-20 at the Adrienne Arsht Center in Miami. All three performances shared exceptional contributions from the men (many new to the company), inspired contrasts between the works, and a depth of talent where first and second casts forwarded equally strong performances.

“Stravinsky Violin Concerto” opens with a Toccata followed by two Arias composed of a pas de deux danced by two different couples; it then closes with a Capriccio for the entire cast. Violinist Mei Mei Luo’s solo here was exceptional and the dancing, inspired.

Carranza initiated on Friday, kicking high in front and to the side, her movements taken up by the men. To short strokes in the violin, she stepped and tapped, turning her leg in then back out as she hopped in quick shifts of weight. The men here, too, reflected her movements. When Carranza returned in the second iteration, the women who escorted her mirrored her gorgeous leaping steps and swinging arms. The message? “Stravinsky Violin Concerto” is about ignoring boundaries.

On Friday, Aria I was danced by Nathalia Arja and Alexander Peters; on Saturday and Sunday by Kleber Rebello and Bianca Bulle (new this season). Aria II was danced by Katia Carranza and Renan Cerdeiro all three performances.

Often acrobatic, Aria I frequently edged toward the grotesque as when Arja on Friday rotated a backbend. Peters struck a similar chord when he pilloried her, his forearms catching her at the elbows, or when he circled her in arabesque with her foot on his throat.

Rebello and Bulle were also strong here. Rebello kept a watchful eye on Bulle, never letting us forget she was always the point.

Danced by Carranza and Cerdeiro, Aria II presented a couple enmeshed, simple walks the scene of furious battles of arms, wrists and elbows where neither would just let go. And Carranza’s character needed the support as when en point she collapsed forward, legs bent inward, stopped from falling by Cerdeiro bracing her knees. At the close, he reached from behind, sweeping one arm outward then brought his hand over her eyes, pulling her into a deep backbend.

With a rush of violins a presto the Capriccio opened to a happy wave among the dancers as the entire cast shifted from Aria etherics to a group dance that was distinctly Russian, earthy and warm.

Next up was Paul Taylor’s 1982 “Mercuric Tidings” set to music from Franz Schubert’s Symphonies Nos. 1 and 2. The Opus I orchestra under principal conductor Gary Sheldon displayed terrific flexibility the entire program as it transitioned between Stravinsky, Schubert and the closing Rodgers and Hart number.

It loosely coordinates around a central pair performed on Friday by Arja and Peters and Saturday and Sunday by Cerdeiro and Emily Bromberg. On Friday, Peters and Arja shined, Peters like a young Helios in a lunge powerfully reaching across his body or swinging Arja over his shoulders. On Saturday, Cerdeiro struggled but bounced back on Sunday with Bromberg who, muse-like, launched and landed, pulsing with the strings.

The men were consistently stellar. Aaron Hilton, Shimon Ito, Satoki Habuchi, Damian Zamorano and Bradley Dunlap repeatedly flashed across the stage, eating the diagonal with jetées often capped with saute de basque. The effect radiated power. Also lovely on Friday and Sunday was the duet between Habuchi and Mayumi Enokibara during the blue-lit Adagio.

The evening closed with Balanchine’s 1936, “Slaughter on Tenth Avenue.” Originally located at the end of the Rodgers and Hart musical “On Your Toes”, Balanchine re-choreographed the piece in 1968 when it entered the New York City Ballet repertoire.

The ballet starts with a laugh as a jealous Russian danseur hires a mobster to kill a rival. Rainer Krenstetter as Morrosine oozed comedy here.

“Slaughter” has been called “Balanchine-light”. Perhaps, but Balanchine makes a point when he breaks the 4th wall. Broadway paints broad strokes and likes its feelings loud. The over the top dancing supercharges the simple love story. When the Striptease Girl – played Friday and Sunday by Jordan-Elizabeth Long and Saturday by Kathryn Morgan (new this year) – gets shot it’s easy to forget that it’s all just an act. 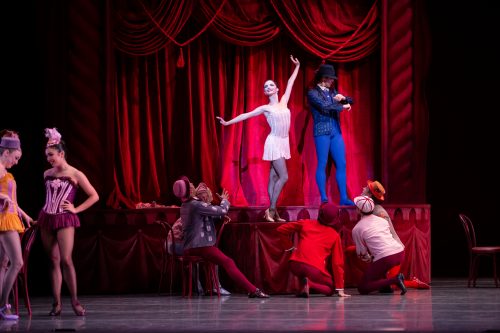 Jordan Elizabeth Long as Striptease Artist in MCB Slaughter. Photo by A. Iziliaev

Long and Morgan approached the role in very different ways, and both women were wonderfully effective.

On Friday and Sunday Long performed with abandon but managed to maintain a reserve expected in someone playing the role of a striptease artist in a speakeasy. When she threw herself in the way of the bullet, she showed her character cared about him all along – “Oh, no!” Mission accomplished. We’ve been duped into forgetting this is a play within a play.

Morgan produced a very different reaction. Her extraordinary energy and terrific sense of theater mesmerized as she caught the accents in the snare with the flick of wrists and fingers. She never lets us forget that she’s just playing a part in the play. When she throws herself between the Hoofer (played on Saturday by Swatosh) and the bullet, it is self-conscious and funny, so she gets the laugh. Mission accomplished.

Trained in tap, Chase Swatosh was an extraordinary Hoofer and a terrific partner to both Morgan on Saturday and Long on Sunday.

“Slaughter on Tenth Avenue” continues at the Broward Center October 26 and 27th and at the Kravis Center November 8th to the 10th. Purchase tickets at https://www.miamicityballet.org/slaughter or by phoning the box office at 305-929-7010.