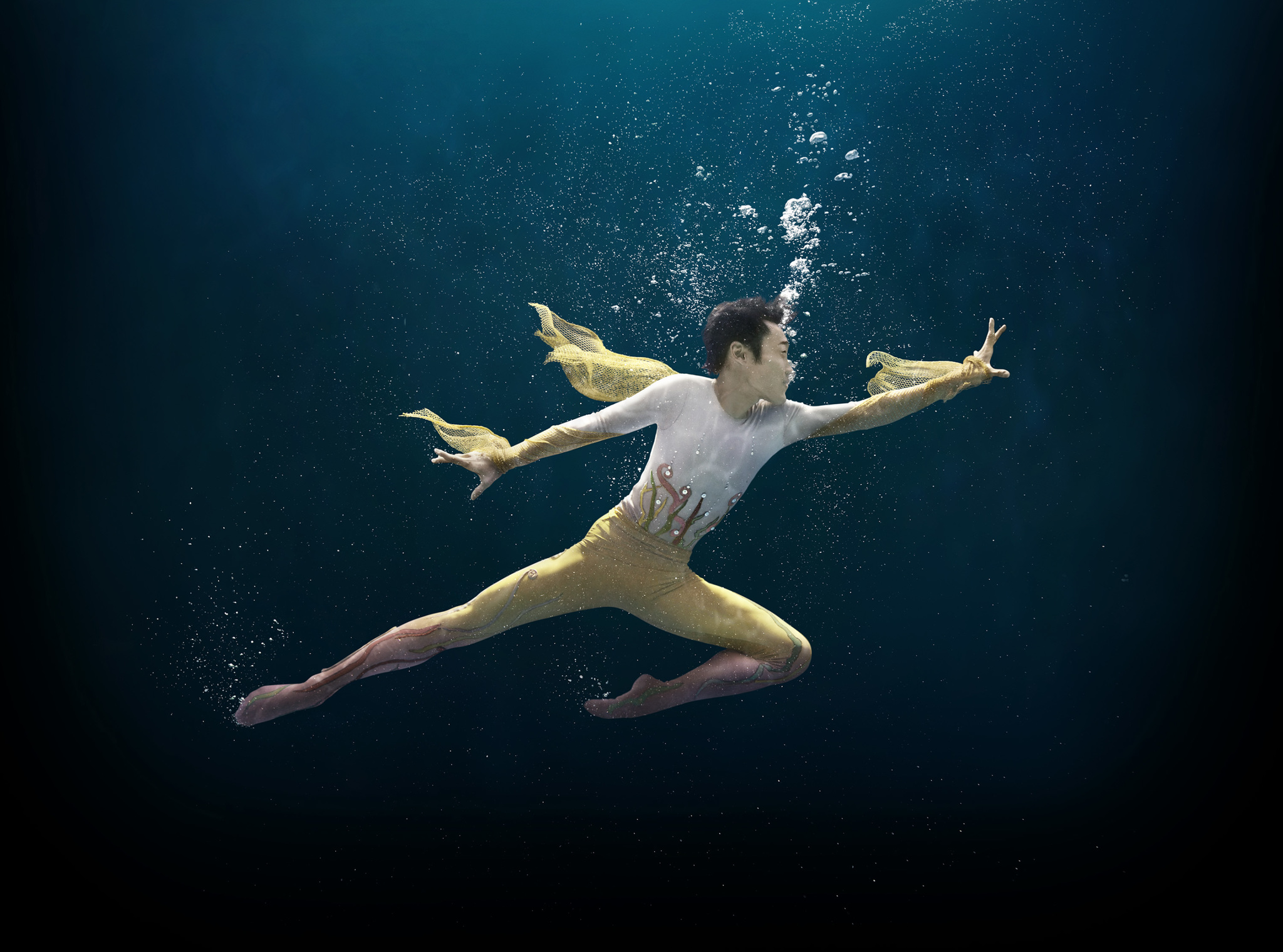 Upon awakening, Titania — Queen of the Fairies and now also mistress of an aquatic realm — looked positively lovestruck. She danced around, clung to and caressed the cuddly object of her affection, a manatee of miraculous agility. Although at first shy and astounded, the creature grew bolder and more graceful in the queen’s adoring gaze. Before you scoff at that kind of trans-species infatuation, know that it stemmed from magic — and, besides, who hasn’t felt a tug at the heartstrings in the warmth of a companion animal?

As they rehearsed this duet from “A Midsummer Night’s Dream” in a Miami City Ballet studio, principal soloists Lauren Fadeley and Didier Bramaz made it bubbly and sweet. In their draft of whimsy, the steps came from Balanchine and the music from Mendelssohn, the pairing that introduced this New York City Ballet version of Shakespeare’s play to audiences in 1962.

The inventive Miami City Ballet production, which debuted three years ago, will close the company’s current season March 29-31 at the Adrienne Arsht Center for the Performing Arts. It transplants the fantasy of complicated love to a Florida water world, vividly evoked in Michele Oka Doner’s sets and costumes and Wendall K. Harrington’s projections. Amid seagrass and coral motifs, seahorses race and fairies flit about like dragonflies. And, yes, a manatee replaces the donkey that Bottom the weaver turns into in the original drama, with characters still under the spell of mischiefmaker Puck, fixer to Fairy King Oberon.

“I’m happy to say I have a long history with this ballet,” says Fadeley, now in her third season with Miami City Ballet. She performed the Titania-Bottom duet for the first time in a lecture-demonstration as a teenager while studying at the School of American Ballet. “This was entertaining and so much fun, but really served to show the art of the pas de deux. I just ate up all the information my teacher gave me.”

It turned out that the two-act work — Balanchine’s first original full-length story ballet — continued to occupy high points in Fadeley’s career. During her apprenticeship at New York City Ballet, the Orlando native was called at the last minute to dance in “Midsummer,” which she had understudied, and that performance clinched her corps de ballet contract. After leaving New York to go to college, she returned to the stage with the Pennsylvania Ballet. There, she ascended to the rank of principal, raking up valuable experiences as she appeared in “Midsummer,” not just as Titania in Act 1, where supernatural agents both hinder and help two young couples in amorous escapades, but also in the Act 2 divertissement, which celebrates love’s victory in a wedding ceremony. On tour, Fadeley even got to perform the work at the Kennedy Center, one of her prized accomplishments.

For the ballerina, dancing Titania with her third company has enhanced the sense of belonging to her current artistic home. “To perform this again is a real gift,” she says. “Such a beautiful role heightens the excitement of revisiting one of my favorite ballets.”

Even in practice gear, as she tweaked her interpretation of the choreography, Fadeley brought a personal charm to her moves following the suggestions — to speed up some steps or accent a phrase through arm flourishes — voiced by Miami City Ballet artistic director Lourdes Lopez, watchful alongside ballet master Arnold Quintane, who cued the music and added comments.

“I’m hoping to bring a greater maturity to Titania at this point, of course,” Fadeley says. “At first, I could connect to how pretty she was, how cute she acted. But now, I’m more attuned to the regalness — well, the power of the character.”

Fadeley points out that such a defining quality has to emerge straight from the ballet’s opening pantomime, where Titania asserts her right to keep a changeling, claimed by Oberon, as her ward. “Titania shows so much confidence,” the ballerina notes. “Just look at how she immediately says ‘no’ to Oberon. The way she commands the stage you never doubt she, too, is in charge.”

And each time she arrives on scene, Fadeley has to assert that majesty. Past the conflict with her consort, she dances a pas de deux, elegant and ardent, with a fetching cavalier (Jovani Furlan), proving her dominion can also heat up the royal waters.

“It’s lovely to show our connection through the dance,” Fadeley says. “There are some tricky turns and lifts here, but these have to be put in the service of the characters. The overall difficulty, ironically, is that all the scenes need to have a lightness to them, making even difficult moves look like, ‘Oh, they’re simply nothing.’ ”

The ballerina doesn’t underestimate technique, but she emphasizes, “The importance lies in telling a story. That’s why people come to see this.”

Shimon Ito, who’s reprising the role of Puck, couldn’t agree more. The soloist brings with him a trove of powerhouse tools: air-skimming elevation, the briskest of footwork, and whirligig turns. Yet he insists on applying these skills to develop character and build dramatic situations.

“Each jump,” Ito says, “can have a different meaning.”

Such hallmarks of the vigorous choreography defining Puck put an exclamation point on context, whether in discord or harmony.

“It’s easy to get caught up in the how of the steps, but I always need to explore the why,” the dancer says.

Moreover, the transitions between flashy steps are equally important to him. A reaction, the soloist contends, can be as crucial as an action.

To carry out his artistic goals, Ito finds it’s an advantage to be able to return to his role. “I really do feel more comfortable in it now,” he confesses, revealing how watching his previous performances on video lets him lock in positive elements, including any that may have surfaced in the surge of a show.

This time around, Ito has gained a bigger picture of the drama, since he’s also set to dance as Oberon. “It’s great that I get to see Puck from a different side,” he says, knowing that adjusting to the interplay with others is an essential part of the artistic process.

As Fadeley puts it, “I sense how the dancers are all connecting through this ballet.” In fact, beyond leading in the cast, she can’t wait to watch the show as an audience member, declaring, “This production really blows my mind.”

That’s the kind of enthusiasm artistic director Lopez hoped for when she originally oversaw this special staging of “A Midsummer Night’s Dream.” More than just one season’s novelty, with local color in its striking design, the repertory piece was meant to keep coming back, giving Miami City Ballet an enduring mark of distinction.