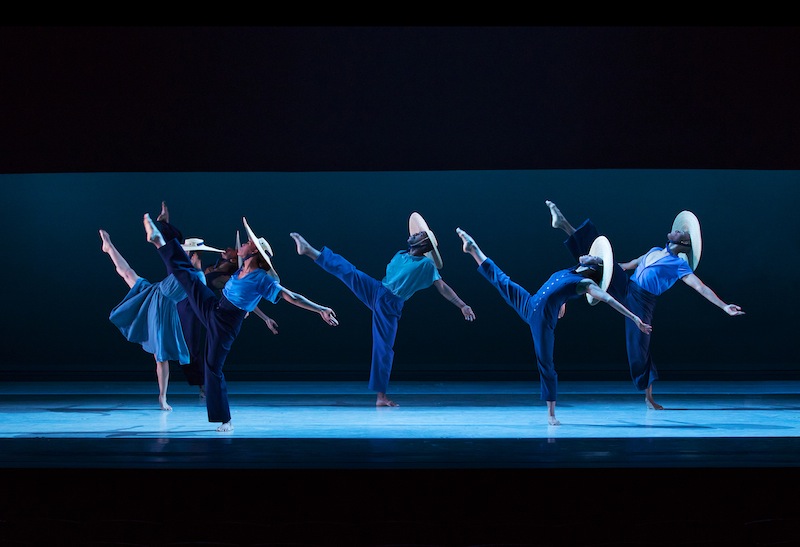 When the Alvin Ailey Dance Theater returns to town this week, Miami native son Jamar Roberts will take center stage. As one of the company’s star dancers, he has long shined as a performer. But he has now also stepped up as a choreographer.

The company’s four-day engagement at the Arsht Center for the Performing Arts begins Thursday, when Roberts’ first choreography for the main Ailey company makes its Miami debut.

Born and raised in Miami, Roberts is the product of local arts magnet schools including New World School of the Arts. Now in his 14th season dancing with Ailey, his piece “Members Don’t Get Weary” represents a major milestone in his creative career. He has joined the exclusive ranks of the choreographers who have set work on one of the country’s premiere dance institutions.

Current Ailey director and fellow Miamian Robert Battle, raised in Liberty City, recognizes the import of the occasion. “It’s one of those moments in a choreographer’s career that is really quite substantial,” he says.

“Jamar has always been a marvelous dancer with the company, you can’t miss him,” says Battle. “But it turned out that he had this choreographic voice… I was watching and waiting for the moment to invite him to choreograph something for the company and he did not disappoint.”

The young Roberts was given full creative freedom to work with a corps of dancers of remarkable ability, his colleagues, without directorial oversight from Battle.

In the process, the young choreographer found his fellow dancers supportive and open. “I didn’t know how important that support would be,” says Roberts. “They gave me a lot of courage and confidence in what I was doing. And obviously they’re some of the best dancers in the world so it was a given that they would dance the work well.”

Set to the music of iconic jazz saxophonist and composer John Coltrane, “Members Don’t Get Weary” is a blues-inspired piece responding to the tense social and political landscape currently brewing in the U.S.

Battle has often spoken of the company’s performances as a respite from the harsh realities we may find outside the theater doors, and considers dance a supremely expressive medium. “People look to the arts, even if subconsciously” he says, “to get more of a perspective on the world.”

“In my opinion,” says Battle, “you don’t play the blues to get sad, you play the blues to get happy,” and he describes “Members Don’t Get Weary” as a piece about spiritual uplift. Yet, he says, “it maintains this weightedness that is emblematic of the way we feel, perhaps, as a country—weighted in this tension where you don’t know if the person next to you is there to hold you or strangle you.”

Community storytelling is central to this year’s program, spanning multiple generations yet speaking to current anxieties.

The social conscience of the company is rooted in Ailey’s original mission. In 1958, on the brink of the Civil Rights movement, he wasn’t seeing the African-American experience represented on the concert dance stage.

“There was a lot of stuff that influenced him in the creation of the company,” says Battle, “that had to do with matters of the heart, that had to do with things that were personal to him, as much as they were about the world at large and about his community.”

A rare combination of artistic excellence and heart is what makes the Ailey company stand out. “Those things don’t always ride together,” says Battle. “To have this technical efficiency and then also to maintain that sense of humanity… I think that is a cornerstone of why people come to see the company over and over again.”

“You don’t just see it,” he says. “You feel it, and it connects you to that primal need to move, and to be connected as a human being.”

“Revelations,” Ailey’s signature masterwork, communicates the inner and outer spiritual experience of individuals, couples, families and communities. Since its appearance in 1960, it has been carefully preserved for decades, taking audiences back in time for a direct experience of Ailey’s creative voice.

For the Ailey dancers, too, the piece has served as a way to connect to the soul of the company; learning “Revelations” is a rite of passage for each new dancer.

In Miami, “Revelations” is shown at every performance, every year. Roberts, as a choreographer, will in a sense share the stage with Ailey this weekend.

When asked if he was thinking of the Ailey tradition during his creative process, Roberts says, “100 percent. There’s no way that I could have ever made work on this company without considering the legacy that’s come before me.”