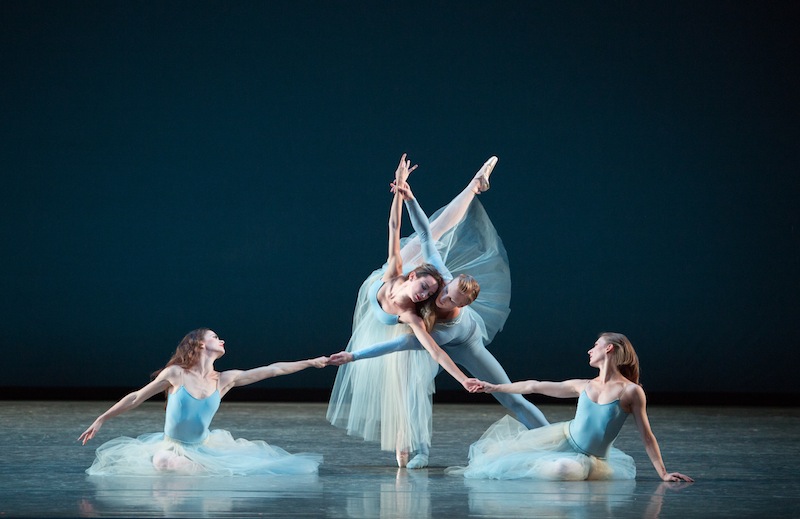 The white walls and well-trod floor of a light-pierced studio at Miami City Ballet enclose a charmed space—a field of incalculable energy—as sets of coupled dancers rehearse, in quick succession, two company premieres for their second program of the season, opening Jan. 13. On the schedule this day: the antic maneuvers of Calcium Light Night, Peter Martins’ 1977 choreographic debut, and Carousel pas de deux, a fairground for spinning passions, from the end of Kenneth MacMillan’s career.

In Calcium, Nathalia Arja and Kleber Rebello take the area closest to the mirrors to work out–by turns and then together–curious sequences of movement: arms spread like super-sensitive antennas, one leg entwining the other, chests up for jackrabbit jumps, lots of foot flexion. Muscle-steeling tension leads to languid fold-overs.Chase Swatosh and Lauren Fadeley, putting individual zing on this duet, shadow their colleagues.

The dancers are on their own today.But personal study and previous coaching from Nilas Martins (Peter’s son) have obviously come to help—all the better for them to obey rhythm, not let a single accent slip, and dish out attitude. In the unforgiving momentum, this focused foursome keeps breathlessness and fibrillation at bay. It’s true that chunks of the Charles Ives score, as bristling and translucent as quartz, for now have been slowed down to insure the accuracy of moves. Yet the curious choreography remains tricky.

“The first time I saw this I went, What?I honestly wasn’t sure what I was seeing,” Arja will confess later. “I had to watch a video of the dance over and over, even while having dinner! It was difficult learning this musically. Luckily, Nilas broke it down for us coming up with counts. He was amazing.”

Now Arja, with vigilant doe-eyes, not only reveals she’s internalized all that calculation—her pointe shoes clicking–but can communicate it, glancing at her partner’s placement and even telegraphing adjustments to Fadeley, her conspirator in the fastidious action, who jokes about how this prickly choreography can bedevil a ballerina.

“I’ve never done anything like it,” Arja agrees. “A lot of shifts have to come together. And you can’t just go with impulses—you have to think and move. You have to be very precise, strong and sharp. It leaves you really tired.”

As a contender to the male role in both duets on MCB’s program, Swatosh adds: “Calcium is the stark opposite of Carousel. It’s cut and dry. Though the moves in Carousel are bigger, fuller—the technical demands more obvious—there’s a freedom to it that makes me more relaxed. Calcium feels barer, and the tempos and concentrated phrases are really challenging. You have to have a lot of clarity.”

The Broadway-tempered pas de deux from Carousel was excerpted from the historic Rodgers and Hammerstein musical, re-choreographed in 1992 by MacMillan for a National Theatre revival in London that debuted a few weeks before his death. The concert piece features Louise, the main characters’ troubled daughter, in a lustful encounter with an appealing cad.

While still adjusting to Swatosh, a first-time partner, Galler injects athletic feats with real feeling. “This is about going into someone else’s world,” she says.“But since there are no sets, I must project the situation—letting the audience imagine the scene through me.”

Swatosh likes a pure dance approach. “You’ve got to make sure the steps themselves become expressive. Once you feel comfortable with them, you can dive into a deeper realm.It’s a process.I believe acting is best when it’s natural—without embellishments.There’s no need to spoon-feed the story to an audience.”

Both partners concur that a good connection with each other precedes effective communication with the viewers. “Accommodating to a partner can be tricky,” says Swatosh.“When someone like Samantha comes along, with such a pleasurable personality, it’s so much easier to work evenly together.”

Galler explains: “There has to be a lot of trust in this ballet—with flips and jeté lifts and figuring out positions with legs exactly the right way. It’s quite a whirlwind!And Chase is always there, saying, hey, let’s think about this. It makes things so much better. For a good partnership you have to be equals.”

Reflecting on the company’s upcoming program, MCB artistic director Lourdes Lopez points out the need not only for balance—thereby the contrasting duets at the center of the show—but also for perfect-fit performances. “The Broadway musical is seamless,” she says.“But Calcium is jagged, not comfortable. You really have to have the right cast for the in-your-face quality to come across. I feel we have dancers with the right personality for that now.”

As an original New York City Ballet cast member of Jerome Robbins’ Glass Pieces, another ingenious company premiere on the bill, Lopez attests to the value of boundary-stretching choreography for dancers. She recalls an aha-moment when, after all the sweat equity in the studio, performance with the graph-sheet backdrop and workaday costumes gave the Robbins ballet “a sort of pixilated look. I thought, my God this is Jerry’s response to the rise in technology. I look at the ballet now and realize how forward-thinking it was.”

Robbins biographer Deborah Jowitt explains how having fallen under the spell of both downtown dance and contemporary composers, the choreographer hit upon this big-group work, merging classicism with minimalism, set to the brief motifs and spiraling structure of Phillip Glass’s music, including the march from his opera Akhnaten.

Lopez praises the ground-breaking power of the ballet’s three parts, which she can summarize with the clarity of a significant episode in her dancing life. “In the first section the corps has a lot of walking steps and then, among them, come three couples—six angels—which to me are the artists who influence where the mass movement is going. While a couple is dancing a very romantic pas de deux, the second section has a line of females silhouetted in the background following a very exact sequence of moves, with minimal changes and difficult to learn, which I see as equations that are the same except for tiny variations. The third section becomes tribal, grounded in the downbeat, and this takes us back to our roots.”

Serenade will round out her company’s offerings.History-making as Balanchine’s first choreography in America, this already pulls the old European dance form toward a novel phase in the New World.But the work also brings a strong hue of academic classicism, nicely setting off the accompanying pieces.

“Putting this very varied program together,” says Lopez, “I wanted the audience to understand that, yes, all of this is ballet.”