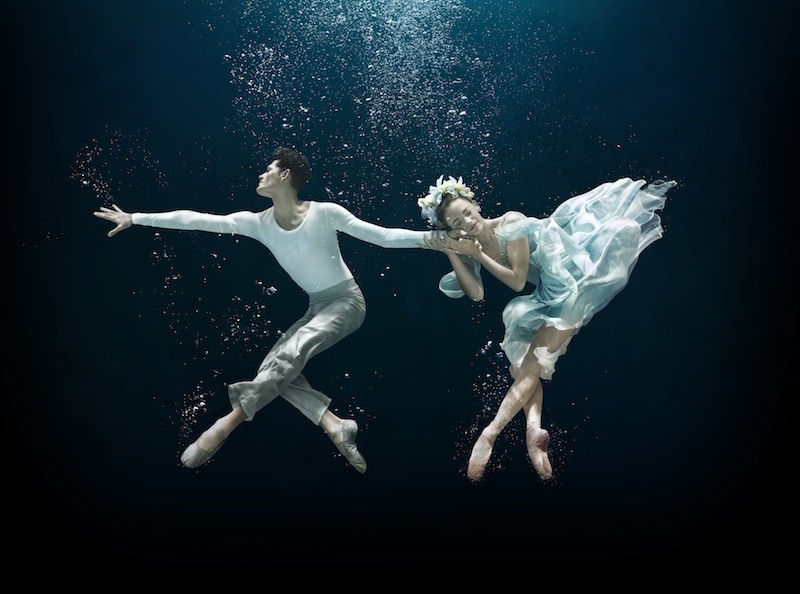 In Act I of Balanchine’s Midsummer Night’s Dream, the mischievous and slightly malicious spirit, Puck, works a spell on the weaver, Nick Bottom. He gives him the head of a donkey and a mighty appetite for straw. Later in the act the King of the Fairies, Oberon, places Titania his Queen under a spell, and she falls madly in love with this donkey-man. Titania and Bottom then dance a pas de deux and it is clear that Titania loves Bottom and Bottom — well, he’ll dance with her if she continues to hold out that sheaf of straw.

I remember when my grasp of ballet looked a lot like Bottom’s dance with the Queen. Sure, the gorgeous sets, Rodin-esque bodies and Olympic leaps kept me coming back, but at the end of the night someone asked me what it all meant. What did it mean?

Some answers were provided at MCB Studios on Miami Beach, when artistic director Lourdes Lopez extended a recent tradition of presenting the Open Barre as a platform for interpreting upcoming MCB programs. This focus was MCB’s all-new production of George Balanchine’s Midsummer Night’s Dream debuting March 18th at the Arsht Center, concluding its 30th anniversary season.

Joined by Miami-born playwright and MacArthur fellow Tarell Alvin McCraney, Lopez — a Cuban American raised in Miami — first described what drove her to re-envision Dream. During her career as a dancer at New York City Ballet she performed many of the ballet’s roles directed by Balanchine himself.

Lopez explained how with other ballets Balanchine allowed the dancers room to interpret the parts on their own, while with Dream he was “very specific with the details of the movements he was setting on them.”

Later in her role as executive director of the Balanchine Trust Lopez noticed “the ballet had accrued a veneer over the years” due to cramped dancing caused by the often bulky, tight fitting costumes the dancers wore and a stage awkwardly cluttered with trees and other design elements. Her intent with this MCB re-interpretation of Dream was, “to strip all of these extraneous elements away.”

McCraney and Lopez then dissected scenes from the ballet itself. Early in Act I a quarrel breaks out between the Fairy King Oberon and his Queen Titania over who will claim a young Page for their retinue. Oberon, danced by Renato Penteado in burgundy top, grey tights and long white cape, first greets his Queen, Jennifer Kronenberg, stunning in pale pink dress and train, with a kiss. Then with clasped hands, the king begs to have the Page (Olivia Quintane) as his servant. With an imperious sweep of her arms, the Queen refuses. Oberon then shifts tactics, simply lifting the child and setting her behind him. A single finger from the Queen directs the girl at her side, and when the King persists, Titania physically blocks his advance with raised arms.

Stopping the scene, McCraney and Lopez first solicited input from the audience before McCraney interpreted the pantomime between the dancers as Balanchine’s theatrical presentation of equal forces poised in conflict, a theme repeated in many of the ballet’s key scenes.

In the second scene, Lopez and McCraney explored the depth of meaning expressed by a single gesture made by the lovers, Hermia and Lysander, danced by Jennifer Lauren in pale pink knee length skirt and Chase Swatosh in striking red. The hands of the two remain grasped throughout the scene whether they walk in an embrace, dance a pas de deux, or she sits on his bent knee.

For McCraney and Lopez their hold telegraphs the intimacy that exists between them. They may wander a wild forest to escape the order of the Duke, that Hermia must marry someone else or die, the constant grasp of their hands acts like a meme for the affection they feel even in the face of intense uncertainty.

So if a terrific evening of ballet has ever left you dazzled but with the queasy sensation there was something you missed, catch Miami City Ballet’s next Open Barre and discover how every sweep of the arm and point of the toe not only enchants, but speaks a language all its own.