MCB: ‘Face to Face and Body to Body’ 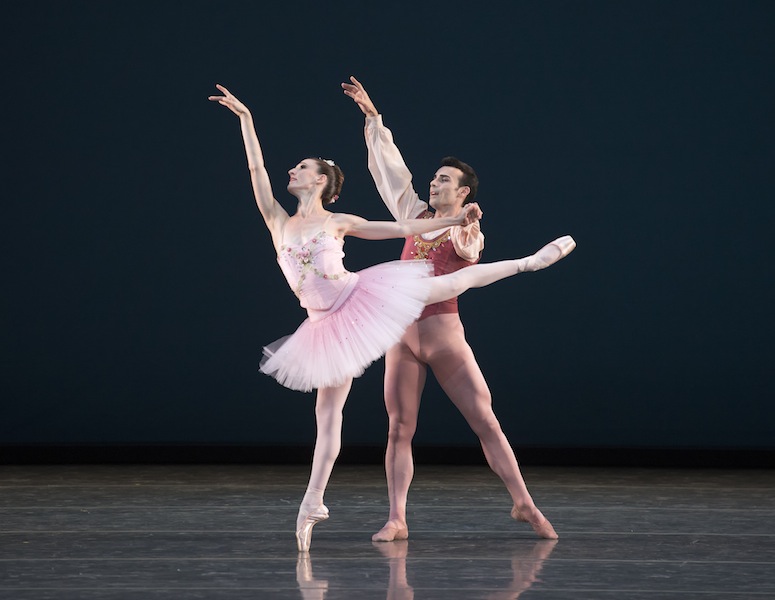 Is it really accurate to say a body dances across a computer screen if we consider the video we stream is nothing but a neat trick pulled off by lines of code and pixels? In her comments to the audience on the opening night of Program II at Miami’s Arsht Center, Miami City Ballet company director Lourdes Lopez asked the audience to reflect on the powerful contrast posed by ballet to our contemporary screen-mediated, digital life as an art form passed from generation to generation, “face to face and body to body.”

And Balanchine’s La Source hit this theme hard as an opening piece linked by its score from Léo Delibes to the French school’s influence on the dance. Tricia Albertson and Renato Penteado opened with a pas de deux, both in shades of pink against a sky blue backdrop. Albertson’s porte de bras had so much easy, airy energy that it riveted attention on the flicks of her wrist, articulations of elbow, and turns of shoulder. Penteado accompanied Albertson surgically, a precise hand out just as she completed a turn, another resting as support on her waist as he repositioned himself to both frame and present her after a series of pivots.

The corps dances were inconsistent. In one lovely passage, the line of eight dancers backed toward the audience in a fluttering rosy line, tracing the air with their arms overhead. However, in other passages arms lifted and lowered with different timing. At rest some torsos faced the audience squarely, others showed a profile. The pulse of the orchestra was always slightly ahead of the footwork by soloist Zoe Zien. Balanchine engages in a gentle parody of the French tradition in this ballet that gets obscured when the details are smudged.

A choreography by New York City Ballet artistic director Peter Martins (present in the audience), the Barber Violin Concerto clearly thinks dance as genres of movement so diverse they defy inclusion on the same stage. The ballet matches and mixes two couples – one classical and one modern – who first dance together and then attempt to pair up across styles. Barber’s first movement began with an adagio violin solo, played on Friday by Mei Mei Luo, who sustained a sensitive feel for dynamics throughout the piece, especially in the slower passages. The classical couple opened with a pas de deux, danced by Simone Messmer and Rainer Krenstetter, each in white. Messmer’s body, anchored by Krenstetter, dialogued and toyed with Luo’s playing through a series of pirouettes and a backward extension that made her body from clavicle to fingertip a visible conduit of Luo’s violin.

Half-way through they were joined by Nathalia Arja and Chase Swatosh in the role of modern dancers, also in white but barefoot. Many of Swatosh’s gestures were Atlas-like, legs crouching, arms pushing with bent elbows toward the ground. With the petite Arja the image of strength expanded with the lifts. In one she climbed up the muscles of his legs and continued up his back, like a goat up a cliff face, until her torso and arms extended overhead.

The ballet’s second movement, danced by Messmer and Swatosh in classical and modern roles, explored the compatibilities between the styles but had difficulties. Swatosh struggled to channel Messmer’s energy as she completed turns. The two seemed mismatched when Messmer assumed the same lift Swatosh had completed with Arja so effortlessly moments before.

The third movement erupted as Arja – the modern dancer – repeatedly deconstructed Krenstetter’s classical lines and extensions, mounting him back to back, back to front, even at one point laying on her side and feverishly kicking at the air until he raised his hands to shield his face. The final movement seemed to shout a laugh at the second movement’s suggestion these diverse techniques could be harmonized.

I have seen Tharp’s In the Upper Room danced by MCB at least 10 times. I know this piece well, but loved it because the 13 dancers made what I thought was familiar, new, and fresh. From the opening violins of Glass’ score, Jennifer Kronenberg joined by Messmer, both in black and gray-striped jump suits and framed by white light in thickening mist, stretched arms overhead then jogged in place as if to heat the space up for the sequences of ballet leaps and pivots, jazz steps, tap passages, Warrior IIIs, boxing punches, and martial arts kicks that would cram the ballet’s nine furious movements.

The notable performances here were many. A highlight was the tribal dance performed by a bare-chested Renan Cerdeiro, Shimon Ito, and Kleber Rebello, who crouched and spun, clapped, slapped, and punched the air, winding and unwinding their bodies as violins and horns pulsed beneath.

In the Upper Room is a marathon punctuated by sprints – literally – but as the final piece of the evening it extended the theme of dance as a challenge to our 21st century digital imaginary by riveting attention on the human body as an infinite engine for generating movement. In our world of static faces pasted with the glow of video screens, Program II carried a powerful message that human beings don’t just have a body – they are one.