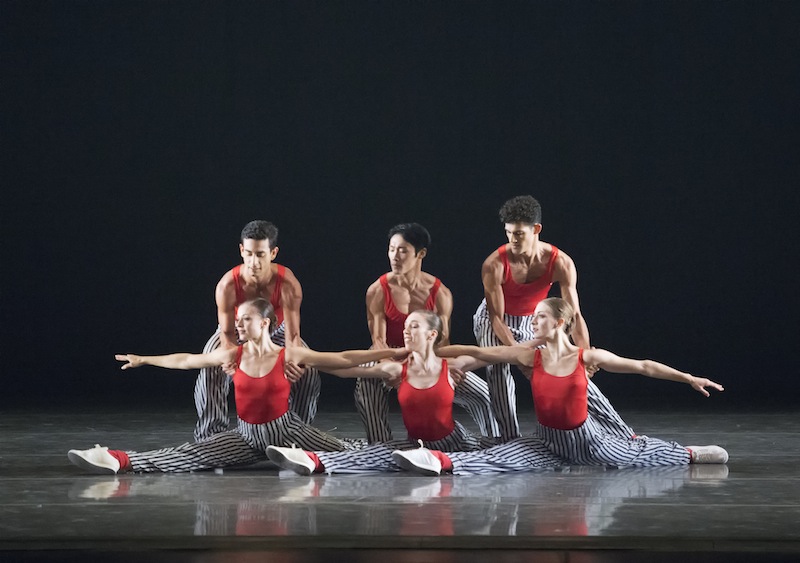 On opening night at the Arsht Center, Miami City Ballet’s second program of the season seduced the senses and engaged the mind. While the three featured works demanded regard for different movement styles and music, almost all performances proved equal in full-bodied response to the choreography at hand.

The grades of physicality, guarded to unleashed, held us in wonder about dance — elegantly classical to brashly modern — as a widely satisfying medium of expression. The foundation for enjoyment was laid in Balanchine’s 1968 La Source, a cream puff with a wallop, its sugar packing the energy of hydrogen fuel. The title means spring, referring to a section of the music taken from a 19th-century water-nymph ballet scored by Léo Delibes (he of Coppélia fame). But this also affirms classicism as a refreshing source of strength and clarity. Other dances on the bill owed cachet to this artistic antecedent.

Seen as a tribute to French ballet, due to the refinement in its bouquet of ballerinas, wearing pink tutus and bound by the lilting music, La Source nonetheless avoids wilted nostalgia. To be sure there are decorative touches — crossed wrists, navigating arms, mincing passages — but the formations hold and shift with crisp vitality. In fact, a few years before this was choreographed, Balanchine admitted to the critic Edwin Denby a preference for “an energetic style, even a soldierly one” over “a note of expensively meretricious tastiness in that of the Paris Opera.” Typical for the choreographer (remember the one-act Swan Lake on MCB’s first program), La Source extracts substance from the past to filter it through a bracing sensibility.

The lead couple here gets to do two pas de deux, with thrilling solo variations, spiritedly compiling poses, lifts, and sparking steps, drawn from the most exquisite classical lexicon. Bright and airy, the interludes for the corps extend this finesse. And certainly the ensemble of eight ballerinas, including the likes of Emily Bromberg and Leigh-Ann Esty, plus Zoe Zien with a wonderful newfound initiative at the helm, matched the flair of the principals. In these roles, seasoned performers Tricia Albertson and Renato Penteado (who was already dancing this for the company a decade ago) brought due power: her gaze as charming as her most intricate steps, his authority declared in support as well as in assertive jumps and footbeats.

To entertaining effect Peter Martins’ Barber Violin Concerto, a company premiere, banks on the differences, sometimes all too facile, between classical ballet and modern dance. The dichotomy emerges from a diamond-cut pas de deux (Simone Messmer and Rainer Krenstetter) followed by the rougher cleavings of a barefoot, bared-soul couple (Chase Swatosh and Nathalia Arja). The duality of the piece also rests on contrasting tones, going from the seriousness of the opening movement to the comical pairing of the ballet man and the modern-dance woman. All this illustrates the range of possible response to a suggestive piece of music such as Barber’s.

Messmer looked like the poster ballerina for classicism, in well-proportioned formations and calibrated strides. Credit Krenstetter, whose dancing can be glacial, for a gameful portrayal of how uptight a man in tights can get, especially under siege by a circling, clinging intruder from a different wing of the dance world. Arja and Swatosh essayed weighty entwinements, his bare-chested blond presence approaching the panache of youthful divinity.

Twyla Tharp’s In the Upper Room also builds upon stylistic juxtapositions. Witty and fierce, this scales choreographic heights, taking the dancers through quick-changing, hyper-charged sequences to a region parallel to Philip Glass’s score, with its unrelenting pulse and voices of alarm. Teams of dancers — hip-classical versus jazzily vernacular — whoosh by as if competing to conquer dance heaven.

On the ballet side, Jennifer Lauren snatched a considerable lead, expert yet playful. The sneaker crew had Messmer finding her way with interest into a new role while Jennifer Carlynn Kronenberg forged ahead as sure-footed as a tour guide. Their cohorts Renan Cerdeiro, Kleber Rebello, and the ever more confident Shimon Ito barreled through to bare their torsos — and their eager artistry — like the sportiest of heroes.

Arts Ballet Theatre of Florida will bring to life ‘Fair...

Indoor shows planned at the Miami Theater Center in Miami Shores and the Broward Center for the Performing Arts in Fort Lauderdale.
Continue Reading

Dimensions Dance Theatre of Miami ready to return to li...

Its Spring 2021 “Program I” will be the first in-person event for both the company and for the South Miami-Dade Cultural Arts Center since the start of the pandemic.
Continue Reading