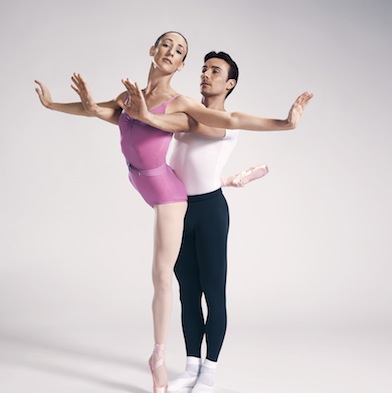 The best choreographers are prodigious ministers, sealing holy unions between movement and sound. To great effect, Balanchine made it his gospel to “see the music, hear the dance,” the inspiration for Miami City Ballet’s second program of the season, which kicks off this Friday.

MCB’s offerings are diverse while representing three master choreographers at a peak of musicality. From Balanchine comes Symphony in Three Movements, a colossal treatment of Stravinsky; Paul Taylor contributes the bright Mercuric Tidings, to movements from Schubert’s first two symphonies; and Twyla Tharp swings out with Nine Sinatra Songs, by turns elegant and rascally.

“Programming is sort of a Rubik’s cube,” says MCB artistic director Lourdes Lopez, admitting to the problems of fitting dances together — in the way corps and principals are highlighted, in the sequence of moods, in the demands on dancers. “All three pieces in this program could be closers,” she says in reference to the strong impressions the audience will take home after the last curtain.

Although Lopez champions how the dancers interpret the Taylor and Tharp works, her enthusiasm for the Balanchine-Stravinsky collaboration remains special. “I danced just about every role in Symphony so many times,” she says, recalling her years at New York City Ballet under the guidance of Balanchine, whose comments she can now pass on to her dancers. “Every time I see this I find it more rewarding.”

An historic Stravinsky festival at New York City Ballet in 1972 produced Symphony in Three Movements. As one of Balanchine’s most impacting works, this vaunts a scintillating immediacy. The choreographer’s response to the music is glorious, but it becomes singular in the mathematical configurations of dancers and the shapes they cut, bristling with tension.

Stravinsky composed the symphony during World War II, attuned to the period’s unease and incorporating themes from an unrealized project to score the film Song of Bernadette. The opening allegro movement features a piano in a nervous environment of brass and strings; the middle andante, with woodwinds as a hovering presence, harbors a harp; throughout the seismic thrusts of the orchestra, those two central instruments play off each other in the closing con moto section. Echoes of The Rite of Spring bring urgency.

Balanchine “saw” this music in complicated — at times explosive — formations for squadrons of dancers in leotards. “Last season the dancers were really able to sink their teeth into Episodes, and I wanted to keep that momentum going with another Balanchine that’s very angular and intense,” explains Lopez. “This kind of corps-centered piece keeps everyone in tip-top shape. They don’t just respond to the music but become it.”

Patricia Delgado, a principal ballerina who, partnered by Renan Cerdeiro, will dance the pas de deux in the middle section, calls this one of her favorite ballets while recognizing its formidable challenges. “You don’t stop from the moment you start,” she says. “The way you attack the steps as the music takes you, there’s no time to breathe. You have to think all the way into your toes!”

Delgado first tackled a corps part at the company premiere 11 years ago, one of the few times she’s asked to take music home. “I’d play it in my car until that taught me about its intricacies,” she says. Now she carries the score in her head, and it wouldn’t be unusual to find her in a mental dance as she goes through daily activities. “I might be at dinner when it dawns on me how to get a passage just right.”

Acknowledging how physically vulnerable she feels dancing in plain leotards, Delgado still delights in becoming what she labels “a creature of pure movement.”

Tricia Albertson shares her colleague’s enthusiasm for Symphony, calling its first and third movements “crazy with energy that sometimes gives me the sensation of floating.” Yet it’s the Taylor piece, with its modern dance idiosyncrasies, which most often tests her abilities. “It has so many different patterns,” she says. “And it’s like running a marathon.”

Smaller in cast than the Balanchine — 13 dancers versus 32 — Mercuric Tidings is nonetheless expansive. Taylor picked his Schubert measures to drive, at top speed and rubbery bounce, a tri-partite celebration of the body in motion. Mostly abstract but never soul-less, this contains very recognizable humanity in displays of individuality, a striving for community and — unavoidable amid such youthful physicality — flirtation.  Keeping clarity in this kaleidoscope can be daunting. “Success is really a group effort,” Albertson emphasizes, knowing that if one person falls out of place, the whole image crumbles.

On the other hand, Nine Sinatra Songs is mostly about the fervor of the one-on-one. A suite of seven duets and two sections with multiple dancers represents the best of Tharp’s lifelong affair with the music of America’s premier crooner, enlivening eight of his recordings plus a reprise of “My Way” through ballroom moves on high-gear.

When MCB added Sinatra to its repertory in 2004, Delgado was given a skittish role to the song “Forget Domani.” But her current poise and precision demand the fuller characterization of “All the Way,” with Didier Bramaz as partner.

“I see this as a couple who can finish each other’s sentences,” Delgado says. “My dancing explores the kind of trust and comfort you learn over a long time on a daily basis. Such a nice romantic feeling!”

“Softly as I Leave You” puts Albertson in the arms Cerdeiro for a portrayal of love and impending loss. “Sinatra’s voice and the way my partner looks at me,” says the ballerina, “take me to an amazing time and place.” For her, this creates the illusion of well-burnished ardor, one more gift to win the hearts of viewers in an already passion-packed evening.

Miami City Ballet’s “Hear the Dance: Program II” at 8:00 p.m. on Friday and Saturday, 2:00 p.m. on Sunday at the Arsht Center for the Performing Arts, 1300 Biscayne Blvd., Miami; tickets range from $25 to $97; then moves to West Palm Beach and Fort Lauderdale; www.miamicityballet.org.