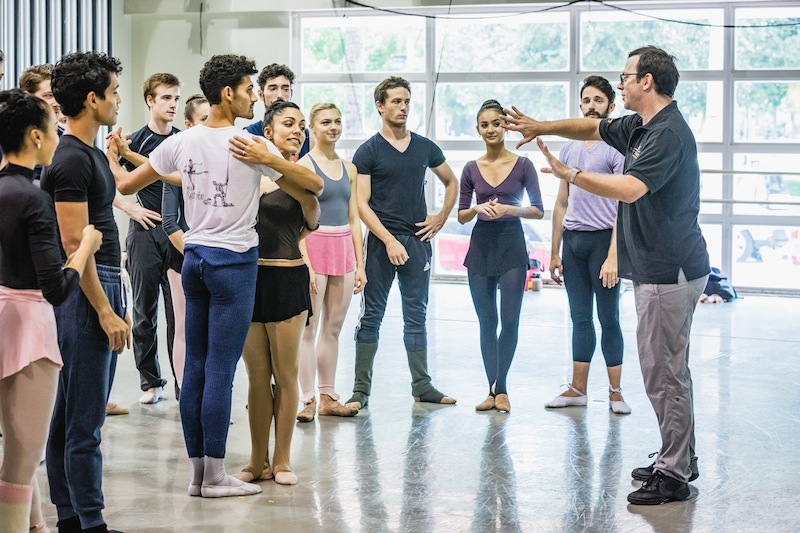 Who doesn’t delight in fairies? Miami City Ballet, for the success of its third program of the season, is certainly banking on one. And, instead of wielding a magic wand, she comes eager to pucker.

The Fairy’s Kiss, Alexei Ratmansky’s revisit of an alluring ballet, brings lots of baggage but follows a new flight plan for the MCB commission. As if under a spell himself, the Russian star-choreographer decided to do still another treatment—his third, following a long line of predecessors—of Igor Stravinsky’s 1928 score, Le Baiser de la fée, whose narrative springs from Hans Christian Andersen’s The Ice Maiden. The composer here pays tribute to countryman Tchaikovsky, putting in a steelier frame several of the earlier master’s lush songs and piano works. Nijinska first choreographed the music, which Balanchine later took up revising several dance versions throughout his career.

“Stravinsky composed this out of love for Tchaikovsky, whose music had actually fallen out of fashion at the time,” says Ratmansky. Devoted to the beauty of that artistic relationship—the melodic depth of the romanticist channeled through the rhythmic complexity of a probing modernist—the choreographer has kept on exploring, from a youthful effort to this current venture, the full dramatic potential of the four-part score.

For Ratmansky, Stravinsky’s abridgement of the original fairy tale remains most suggestive. The scenario distills the complicated details of Andersen’s story into an allegory of the artist claimed by a supernatural power. Here a boy orphaned in a snowstorm grows up as the special charge of a village and becomes engaged to one of its loveliest maidens; marital bliss, alas, lies not in his destiny. A wondrous being in different guises has followed him since infancy and—her kiss as a stamp of passage— finally spirits him away to a place beyond space and time. “It’s like telling the story in three sentences,” notes the choreographer, who recognizes the efficiency of a compressed drama that radiates through its metaphors.

The significance of the danced tale, indeed, is not to be underestimated. Critic Laura Jacobs, writing about Balanchine’s own fascination with this subject, identifies his personal Ice Maiden/Fairy/Muse as “the matriarch who breathed eternity into so many of his ballets.” And Ratmansky invigorates the depiction of an artist’s journey not only with refreshed classicism but also by relying on contemporary stagecraft. Once more he counts on his bond with set and costume designer Jerome Kaplan and stage-projections artist Wendall K. Harrington, long-standing collaborators, to strengthen the ballet’s visual impact.

“I trust them, and we can be very frank with each other,” says Ratmansky. Working shoulder-to-shoulder with these friends makes it comfortable to bring state-of-the-start craft to his project while upholding a fundamental goal: supporting the movement.

“Projections are ideal for dance since choreographers need floor and like to minimize scenery,” says Harrington. “There’s also the benefit of having a lot of images without needing to change sets.” In discussion with Kaplan, she’s come upon a cubist style of design that gives multiple perspectives to the dance-drama without competing with it.

“Projections cannot be too busy or too bright or in your face. They have to lead you in,” the designer points out. “My art is most beautiful when it allows me to create a form of music.”

Ratmansky further relies here on a group of dancers whom he praises for “their humility as professionals. They can work on little details for hours.”

And it’s exactly those fine points that excite Jeanette Delgado, who plays the bride-not-to-be, relishing the choreography for its challenging dynamics. She refers to her duet with the male lead, explaining, “A lot is always happening. I can’t just do a port de bras correctly, for instance, without showing great longing for my partner even in my hands.”

As the choreographer’s second MCB commission in five years—amid his astoundingly productive schedule—The Fairy’s Kiss lets the company not only continue to work with a creator at the top of his form but also sharpen their dramatic skills. “Although Alexei stays in the classical tradition, it’s beautiful how he modernizes it for us to show what’s happening,” says Delgado.

Renan Cerdeiro agrees that the choreography lets him, in portraying the young man, speak fully with his body. “Ratmansky is very specific in his movement, but allows for a give and take. That’s wonderful for the dance and for the dancer. He makes you look good. Working with him has changed the way I dance, so I can take that beyond this ballet.”

MCB principal Simone Messmer, who herself has profited from previous performances of Ratmansky’s ballets at American Ballet Theater, will dance the title role. She credits the choreographer’s humanity—evidenced as much in his dealings with dancers in the studio as in his stage creations—for eliciting more sensitive portrayals.

“He knows your weaknesses and your comfort zone—and never makes you feel rushed. With him, classical technique becomes very logical,” says the ballerina.

This has eased her way into an ambiguous character who bestows a mystical gift yet impedes worldly fulfillment. Messmer has come to take a benign view of the fairy, saying, “She’s not evil at all. She comes to show other possibilities for a child who knows he is different.”

Viewers will have to decide what they think.But it’s interesting that, toward the end of his fairy tale, Andersen himself directly asked his readers, “Do you think this is a sad story?”

The question put to Ratmansky, the choreographer answers: “It depends how you look at it. Yes, the fairy’s kiss is cold and causes suffering. But it helps the boy fulfill his dream.”

MCB’s premiere of Balanchine’s Walpurgisnacht and the return of Christopher Wheeldon’s Polyphonia will complete the program.