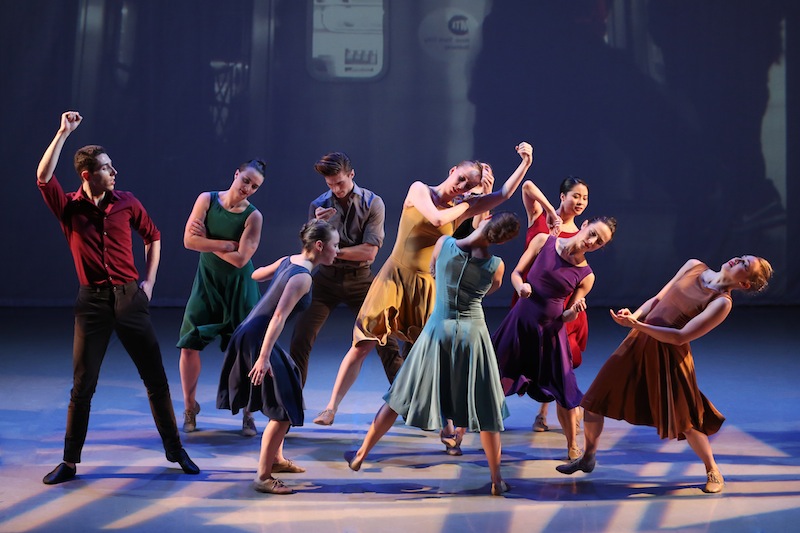 Wednesday night at the Arsht Center’s Knight Concert Hall the South Florida Symphony Orchestra in collaboration with the Martha Graham Dance company presented “Appalachian Spring Suite” and “The Rite of Spring,” as well as the world premiere of a new Martha Graham choreography – A New Place, set to the music of South Florida conductor, Tom Hormel.

Martha Graham artistic director Janet Eilber addressed the audience before the performance explaining that “Appalachian Spring” was composed and choreographed, “during the darkest days of World War II. Copland and Graham set out to create through it a dance of hope and optimism.”

The stage was set with classic modernist minimalism – beams connected at angles implied the outlines of small homes. Set among them were a two-dimensional rocking chair, a bench and a small angled rise.

The timing of the Preacher’s four followers – performed by So Young An, Laurel Dalley Smith, Marzia Memoli, and Anne Souder – was wonderfully enigmatic.Graham’s choreographies leave it open whether they are devoted to the object of the Preacher’s devotion or to the Preacher himself as a potential catch.

However, on Wednesday the four communicated through well-timed pauses and over-ready responses to Knight’s antics a sense of irony to their project.After all, only one would win the prize (Knight) and that could easily be more trouble than it was worth.

At the start of “Suite” the orchestra and the company did not seem at home in the hall. However by the marriage of the Husband and Bride both orchestra and performers had found their place, and the orchestra’s fugue on the Shaker hymn, Simple Gifts, and the country dance of performers Anne O’Donnell (Wife) and Abdiel Jacobsen (Husband) was infectious.

Prior to the world premiere of “A New Place,” Martha Graham choreographer and principal dancer Virginie Mercénè explained, “the main character is coming to a new place, but in the end she is on a journey that could be the journey of anybody who comes to America.”

Set to Tom Hormel’s Legend of Bird Mountain, “A New Place” begins with an empty stage and a black and white film of the New York skyline approached rapidly from the water.

Then dancer Carley Marholin, in purple tea dress, walked to the center of the stage to a legato piano solo. Her arms traced powerful circles that ended with first a lunge then a balance on one leg, torso extended forward, her body liquidly transitioning between movements. The music shifted and the stage crowded with the rhythms of a city street as dancers filled the space walking with the narrow focus of pedestrians in Manhattan, changing direction abruptly, edging out the new arrival’s more lyrical motions.

Gradually the new arrival pairs up with other dancers, who imitate and modify her movements. Further sequences find her paired with a strikingly tall male dancer, Ricardo Barrett, in bright green shirt. In their first sequences the other dancers wall them off from one another. Later this divide breaks down and Barrett and Marholin engage in a series of brief pas de deux.

In this way Mercénè’s choreography first sets up a series of counterpoints between the lone dancer whose manner of movement conflicts with the rest of the ensemble. Mercénè’s strategies for resolving the oppositions of number and style unfold into a narrative about overcoming loneliness and making connection when confronted with the unfamiliar.

The film elements that included slow-motion dance sequences and up-close visuals of Marholin often swallowed up the action on stage. Mercénè’s choreography sets the action in a New York setting, making the most of the music which shifts awkwardly between a North African motif, an Oriental theme, before closing in a klezmer rhythm where the assembled dancers seem to end at a wedding.

Both orchestra and company ended the evening powerfully with, “The Rite of Spring.” SFSO conductor Sebrina Maria Alfonso gelled Stravinsky’s orchestral work with the action of the dancers, and the solos of the double-reeds offered some of the evening’s most enjoyable moments.

PeiJu Chien-Pott as The Chosen One and Ben Schultz as the Shaman invested this well-known choreography with an energy and impact that gave it the air of something new. The exchange between the two performers laid bare the power relations generating the ritual on stage that must have struck chords with anyone in the audience affected by events connected to the #MeToo movement.

First a chain of male dancers with leaping strides followed by female dancers in a tight chain, upper bodies twisted and arms making chopping motions, surrender Chien-Pott to the Shaman and then wall her off for the sacrifice.

Schultz and Chien-Pott then stage an uncomfortable prelude to the final ritual where the Shaman stretches the Chosen One’s contorted body out on his black and white robe and then stretches over her, kissing her on one side of her neck and then the other. The Wednesday night performance laid bare how Graham presents in “Rite” a snapshot of how an entire community can be complicit in the mechanics of power.