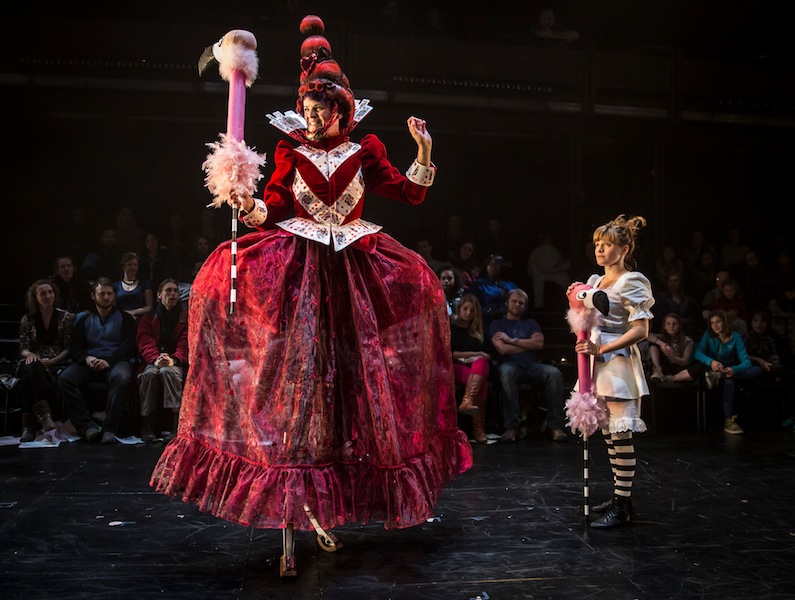 There’s never been an Alice in Wonderland more madcap and zany than the one coming to the Adrienne Arsht Center for the Performing Arts. Yes, that might be a big statement since there have been so many adaptations of Charles Lutwidge Dodgson’s (a.k.a. Lewis Carroll’s) 1865 surreal story about the fantastic world that a young girl discovers when she drops down a rabbit hole.

But Lookingglass Alice, being presented by the Lookingglass Theatre Company, looks at Alice in a different way. The Chicago troupe has, in its 27 years, gained a reputation for its display of physical theater, use of aerial acrobatics and circus arts, choreography, some dance, some song, and, in this show, stilt walking. Carroll’s romp gives license to Lookingglass, which won the 2011 Tony Award for Outstanding Regional Theater, to pull out all the stops. While it’s theater in one sense of the word, Lookingglass Alice is no ordinary drama work. In fact, the script itself is sparse at only 30 pages, which gives a hint that this Alice adaptation relies more on visual storytelling than text.

Ask the actress who plays Alice, Lindsay Noel Whiting, to describe her role, which includes stunts performed on rings, ropes and straps. She admits, it’s physically challenging, especially because she doesn’t leave the stage for 90 minutes (the show’s running time and no intermission). Despite the gravity-defying feats — including flying high above the stage in a Cloud Swing, a thick rope that hangs in loop — the actress-performer’s biggest fear is if, at some point during the show, she’ll have to go to the bathroom.

Director/adaptor David Catlin was more concerned about her hydration after the demanding feats. A “Drink Me” bit in the show fits within the context of the story, but it’s also to give the actress access to water.

Catlin says the physicality in Lookingglass shows came after he and other members of the troupe saw Cirque du Soleil. “It was breathtaking and we thought, ‘Well, why shouldn’t theater take your breath away, too?’” The inspiration for his adaptation came from a few sources of the Alice canon. He admits not having a specific recollection of reading Carroll’s books as a child. “I do have a distinct memory of the animated Walt Disney movie.” The lush, vivid colors and nonsensical characters remained in his psyche, then morphed when he read the novel Through the Looking Glass in college. When he and seven other Northwestern University theater friends (it was actually David Schwimmer of Friends fame who helped found Lookingglass Theatre Company by using $500 saved from his bar mitzvah) reinterpreted Andre Gregory and the Manhattan Project’s production of Alice in Wonderland at Northwestern in 1987, there was yet another spark. “That felt very psychedelic,” says Catlin, who says that out of that production, Lookingglass Theater Company was formed. After being in 22 different spaces — warehouses, art galleries, and small theaters over a 15-year span — Lookingglass opened in June 2003 in Chicago’s landmark Water Tower Water Works. That was the year Catlin adapted Gregory’s interpretation.

Catlin says he approached the story of Alice as a cautionary tale about children wanting to grow up too fast and adults looking back and longing to regain that sense of wonder.

But this isn’t a children’s show for kids. “She’s taking a journey to adulthood,” says Noel Whiting, who started in the show as an understudy in 2007 and, a year later, took over as Alice. “There are messages about loss and remorse and guilt.” She recalls, “I remember being that kid that couldn’t wait to grow up.”

The Arsht Center will transform its classic horseshoe-shaped 2,400-seat Ziff Ballet Opera House into a 400-seat theater, which has been constructed on the stage. “The space will allow us to present the show very closely with the way it was first born at Lookingglass,” says Catlin. “It’s even more thrilling here, though, because we’ll be able to stretch out.” He says the intimacy and interactivity will remain.