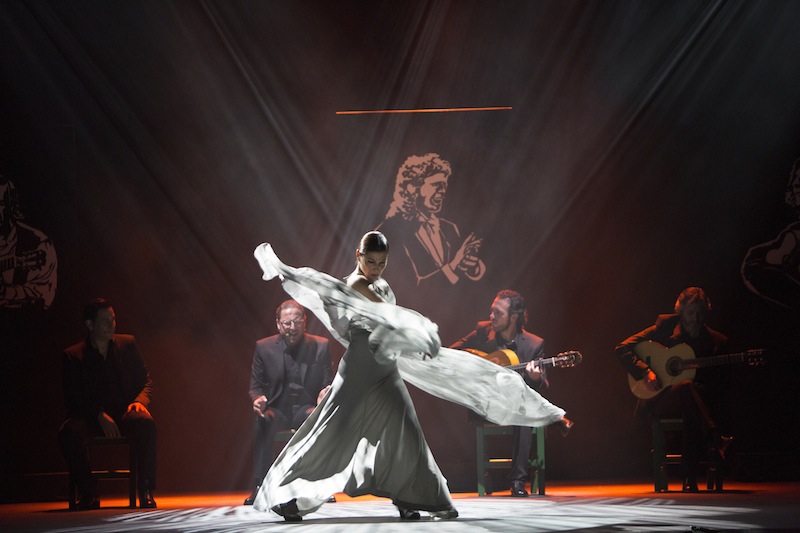 If any dancer in Spain has achieved the status of a cultural icon, it is Sara Baras. She is the female answer to Joaquin Cortes, embraced not just in the dance world, but by television, fashion and film. Oh, and by a little toy maker by the name of Mattel that in 2013 crafted a Barbie doll in her image.

With feet like jackhammers, arms that would be the envy of Michelle Obama and a back with the flexibility of a wire coat hanger, her body seems to have been handcrafted for flamenco. She also has presence. Like Audrey Hepburn, she can embody sultry sophistication in one moment and in the next turn on an unaffected charm as warm as the summer breeze in her hometown of Cádiz.

Baras brings her company, Ballet Flamenco Sara Baras, to the Adrienne Arsht Center for the Performing Art’s Flamenco Festival from March 12 to  14. With seven musicians and eight dancers, including José Serrano, her partner onstage and off, she will present the new concert length work, Voces (Voices).

Asked in a telephone interview to analyze her meteoric success, Baras’s humility seems genuine. On the one hand, she cites hard work and passion. “I never stop. I love to dance,” she says. In fact, she had never taken more than a 10-day break from dancing since beginning classes with her mother Concha at age nine until four years ago, when her son was born. On the other hand, Baras credits the people she shares the stage with: from her lighting designer to her extraordinary ensemble of musicians to her fellow dancers.

Her partner Serrano, billed as guest artist, brings an animalistic, masculine energy to the stage that both contrasts with and complements that of Baras. The level of virtuosity, too, of her small corps of dancers is astonishing. When they dance in a group, their synchronicity is absolute, more evidence of Baras’s eye for detail, the singularity of her artistic vision and her ability to transmit that vision to the people she works with.

Voces is Baras’s homage to six masters, now gone, who left an indelible stamp both on flamenco itself and on her as an artist. They are artists who touched her not only with their onstage artistry but also as colleagues, as mentors, as friends.

These subjects of Voces were performers in the vanguard of flamenco’s evolution as an art form — guitarists Paco de Lucía and Moraíto, singers Camarón de la Isla and Enrique Morente, and dancers Antonio Gades and Carmen Amaya. “All,” says Baras, “have broken with tradition and shown us something new, something different, and have caused flamenco to grow.” Paco de Lucía revolutionized not only guitar technique but also the very sound of flamenco, with his incorporation of the Peruvian cajón and the jazz saxophone, instruments that had never before been heard in this context. Likewise, aficionados speak of flamenco cante (singing) as following a distinct timeline: that which came before Camarón de la Isla burst onto the scene in the 1970s with his hoarse, gut-wrenching style, and the singing that came after he opened the floodgates to a whole generation of long-haired, rough-and-tumble troubadours. Antonio Gades, too, was a game changer who took dramatic works by artists like playwright/poet Federico García Lorca and made them into full-length flamenco ballets, works that live on through his likewise groundbreaking collaboration with film director Carlos Saura.

The only subject of Voces whom Baras did not know personally is the one whose career perhaps most resembles hers: Carmen Amaya. Escaping war-torn 1930s Spain, Amaya eventually landed in Hollywood and thus became the first truly international flamenco star. Her dance company toured the world to packed houses, she was featured in movies, she broke taboos by dancing in pants and she further defied tradition by showing that a woman’s footwork could be every bit as good as a man’s or better. Her trademark turns, which no one mimics as well as Sara Baras, were as fast as lightning, and as spellbinding.

Baras, too, has been immortalized in film, has been at the helm of an extraordinarily successful dance company in a time of economic meltdown, and has continued the revolution in women’s dance begun by Amaya before her untimely death in 1963.

Like Amaya, Baras dances on the razor’s edge of tradition versus innovation, purity versus progress. In Voces, audiences will see an artist who prepares fastidiously, then pushes herself to live dangerously, a hallmark of the flamenco ethos: “When you always take risks, of course you can lose, but if you have your feet on the ground and lots of work behind you, normally you win.”

This story also appeared in the Miami Herald.