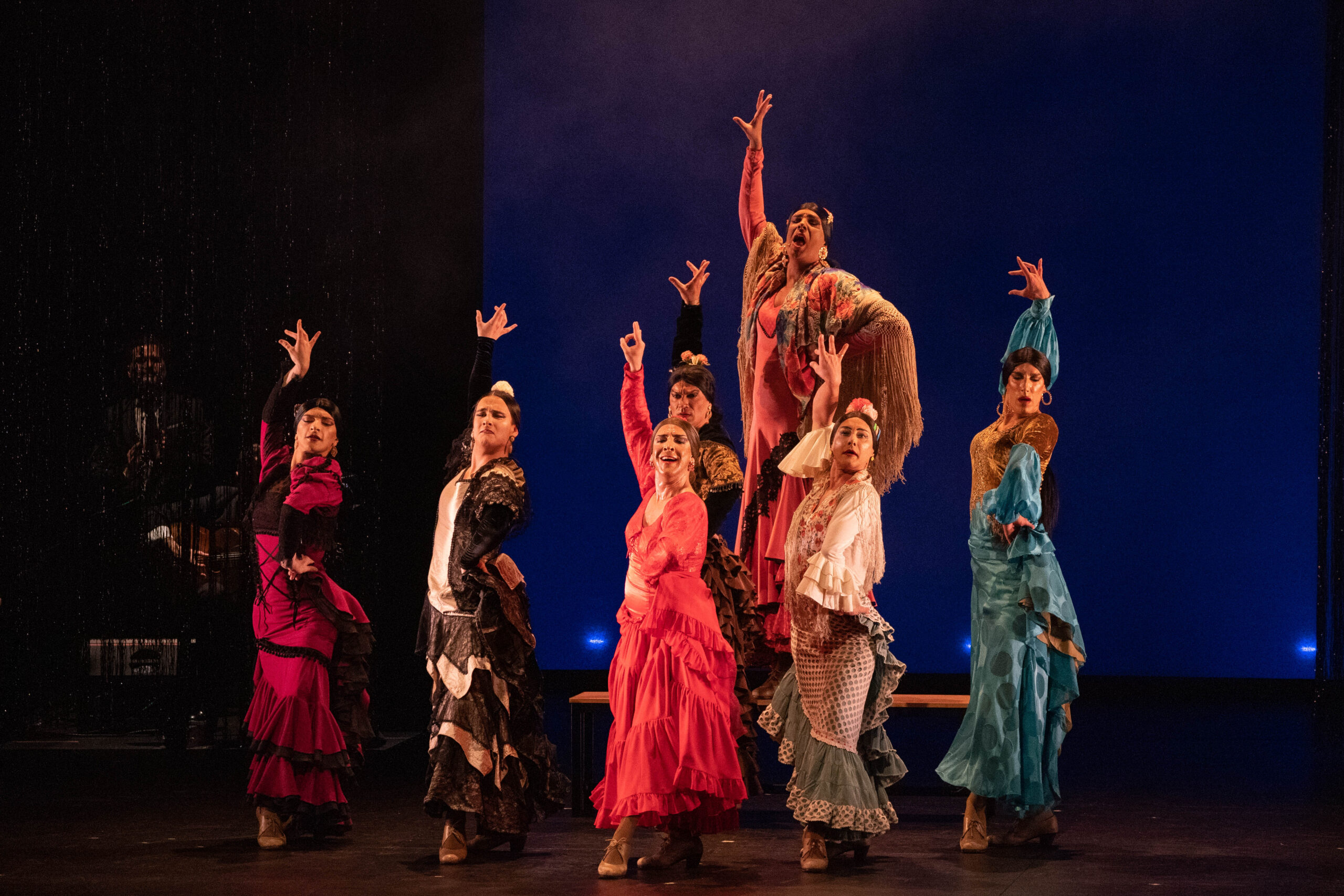 The men of Manuel Liñán’s wildly celebrated and charmingly transgressive ¡VIVA! wowed a nearly full house Saturday night at the Adrienne Arsht Center’s Ziff Ballet Opera House by portraying a ragtag cast of “ladies” in a Spanish dance review from another, less subtle era. The silver lamé curtain across the back of the stage signaled that if the troupe were playing Las Vegas, they wouldn’t be booked at the swankiest spot on the Strip.

Over the course of two hours, the audience came to know a well-defined group of characters, warts and all. Beyond their outsized egos, petty jealousies, anger issues, even their sadness, all seemed animated by a love for the limelight, for flamenco and for living life to its fullest.

Similar to the all-male Les Ballets Trockadero de Monte Carlo, who mold their feet to the satin-wrapped trials of dancing en pointe, members of Liñán’s company have more to tangle with: taming the trailing dresses called batas de cola, mastering intricate shawl work, and meeting the challenge of embodying female dancers from the inside out. Being a woman, this troupe has no doubt found out, is hard work. 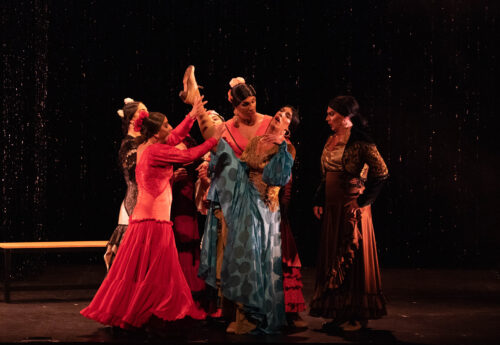 The performance is executed entirely in drag, by Liñán and six male dancers. (Photo courtesy of Daniel Azoulay)

Alongside the virtuosity of these dancers, a brilliant group of musicians served as the glue that held the show together. Singer/dancer Miguel Heredia was like a housemother from the New York ballroom scene, egging her charges on with songs and jaleos, flamenco’s version of cheerleading, only with catchier rhymes. Guitarist Francisco Vinuesa, percussionist Francisco Javier Teruel, and violinist Victor Guadiana accompanied powerful singers David Carpio and Antonio Campos, who hardly came up for air, propelled the show with forceful, driving rhythms, graceful melodies and artfully chosen lyrics. “Libre, somos libres, libres como el viento, como las estrellas en el firmamento” (“Free, we are free, like the wind and the stars in the firmament”), the performers sang in unison. And free, indeed, they were.

Jonatan Miró was inspired by the iconic Carmen Amaya in his solo. Instead of the signature white pantsuit Amaya used to transgress gender norms herself in the 1940s, Miró wore a brown satin dress and bolero jacket. Yet he mastered the tightly wound energy and lightning vueltas quebradas Amaya made famous as well as her demonically fast footwork.

Hugo López, an ingenue in a lacy turquoise gown, looked youthfully over-confident. At one point his feet—like those of the ballet dancer in the movie “The Red Shoes” —refused to stop dancing.  Feigning exhaustion, he lay down on a bench.  But with legs up, his footwork continued as fellow dancers put up a bench beneath it for him to keep tapping out rhythms. He piled on laughs when, still horizontal and framed by four benches, he swung his legs over his head to stomp on the bench behind him. 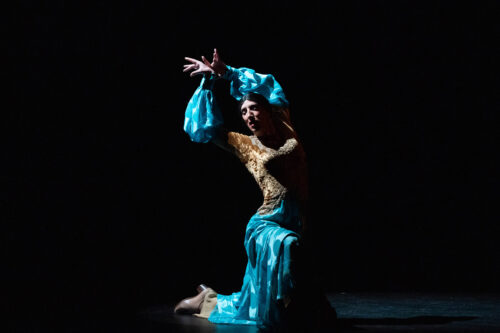 The more compact and earthy Manuel Betanzos channeled a randy housewife at some all-night fiesta flamenca dancing por tangos in a polka-dot skirt and an apron.  This tongue-in-cheek vulgarity makes rhythms like tangos, bulerías and rumbas as much fun to dance as they are to watch. But if one pelvic thrust might have been enough for that Andalusian señora, Betanzos added three or more for mirthful measure. ¡Ole!

In the bygone era, this piece reflects dancers had to be proficient not just in flamenco but also in folk dances and the Spanish classical style, escuela bolera. In the latter Daniel Ramos, gorgeous in a short red dress and ballet slippers, danced out his rivalry with Victor Martín, hilariously upping his adversary with grand jetés, precise turns, and out-flung extensions. Even while funny, he really meant business.

Indeed, what made ¡VIVA! so extraordinary was this kind of prowess. The footwork was as strong and accurate as it was swift. And while many have remarked on the freedom of movement in hands and wrists women but not men enjoy in traditional flamenco, it was interesting to observe how much technique for legs and feet also changes when a fellow dons a skirt.

After so much slapstick, the show became contemplative in its next-to-last section. In an old-fashioned green dress, plainer than any other, Liñán joined guitarist Francisco Vinuesa on a bench on the otherwise empty stage and poured pathos into a song. As the 2019 film “Flamenco Queer” has revealed, it was Liñán’s childhood memory of such a dress from his mother’s closet that inspired ¡VIVA!. Wearing it he’d dance around his room, kitchen towels pinned to his head like long hair, while his mother kept a lookout to warn him when his father was about to get home. 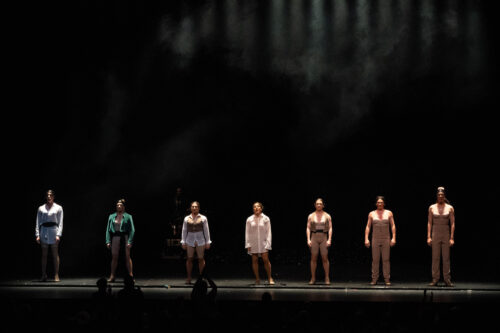 For the finale, the dancers leave their female attire behind and reveal themselves to the audience as men. (Photo courtesy of Daniel Azoulay)

For the finish, the entire company donned the green and white of flamenco’s birthplace, Andalucía, to dance joyful alegrías maneuvering shawls and the ruffled trains on their dresses. One by one the dancers exited, each by turn to reappear, his dress off. Their ensuing sequence as men—albeit in brassieres and wigs—was oddly jarring after their displays in feminine attire. Liñán’s initial point — that we invest pieces of cloth with incalculable power —was driven home as he danced in a man’s white shirt, wielding his flamenco dress now as a prop.

Center stage, the guitarist strummed a final chord, and Liñán ripped off his wig. When he dropped to his knees, the audience sprang up and went on clapping for a long time, until the curtain came down.