Like flamenco, but not sure about modern? Dance Sampler offers chance to experience it all

Dimensions Dance Theatre of Miami is one of the companies in the Daniel Lewis Dance Sampler. Pictured above are Melissa Verdecia and Lyvan Verdecia in  “Smallest-Orbits.” (Photo courtesy of Simon Soong)

For decades, the Daniel Lewis Dance Sampler has opened the South Florida dance season with a diverse program of Miami dance companies hosted at Miami’s New World School of the Arts.

In 2020, the Sampler expanded to include a virtual program and has also included performances at multiple venues.

Daniel Lewis, the founder and Dance Sampler namesake, has been a guiding force behind the growing event.

Formerly an assistant director of dance and faculty member at the Julliard School, Lewis accepted the position of founding Dean of Dance at the New World School of the Arts in Miami in 1987.

When Lewis took on the new position, Miami’s dance scene was just getting off the ground.

Seeing a number of small companies struggling to fill halls, Lewis had the idea of presenting multiple companies in the same program and combining their audiences.

“I started the Sampler in 1989 mainly as an audience development tool,” says Lewis, “because I was going to dance performances for the local companies that were only 25 percent full.  My hope with the Sampler was that all these different audiences would come to see their company, and they would like the other companies they saw, and then they’d come out for them, too.”

In the decades since, not only have many of those small companies matured but so has the appreciation of dance in the region.  Many South Florida companies enjoy well-attended performances and often fill venues to capacity.

Around 2010, Lewis was ready to retire from his position at New World and he was ready to let go of the considerable task of grant-writing and organizing behind the Dance Sampler’s success.  He wanted to turn his attention to arts education for children through a nonprofit organization he founded, Miami Dance Futures.

“It’s expensive to put this on.  You can’t make money doing this,” explains Lewis. The Sampler receives funding from Miami Dade County as well as the state of Florida, which allows dancers and companies who participate in the event to be paid for their work. “Thank God for the state and the county who gave us the funding that we match with private donations.”

Having fulfilled its original purpose, the Sampler could have faded.   Instead, the event changed and grew.

“The Sampler allowed us to aggregate audiences,” says Salterini, “but, more importantly, also cross-pollinate audiences.  With the Sampler, someone could go to see flamenco and then have a chance to see modern dance as well.”

Baumgarten adds that for audiences, it allows for the chance to experience a range of performers.

“Many people are pretty sure what they’re going to see when they go to classical ballet or flamenco.  But we all have limited time and limited funds.  The Sampler gives audiences a chance to go for one thing they know they are going to like.”

With this mission, Salterini and Baumgarten have evolved the Dance Sampler’s initial mission beyond merely filling a venue to exposing audiences to new dance experiences.

But the Dance Sampler also sets the stage for South Florida choreographers, artistic directors and dancers to network with colleagues during group classes and rehearsals that lead up to the event.

“While it is an opportunity for the audiences it is also an opportunity for the performers,” says Salterini.  “All the dancers are taking classes together and they are all getting to meet and become acquainted often for the first time.  It is one of the most significant moments for the community as a whole during the season.”

And performers will get to head to the other side of the state for an additional performance.

The program opener happens at its traditional East coast location at New World School of the Arts in Miami with a second performance the following week in Naples at the Artis—Naples Hayes Hall. The venue escaped significant damage during the recent Hurricane Ian that devastated Southwest Florida. An online Dance Sampler experience, begun during the pandemic because of live-performance restrictions, is continuing, too. The online Sampler program on a digital platform is composed of works specifically made for film. 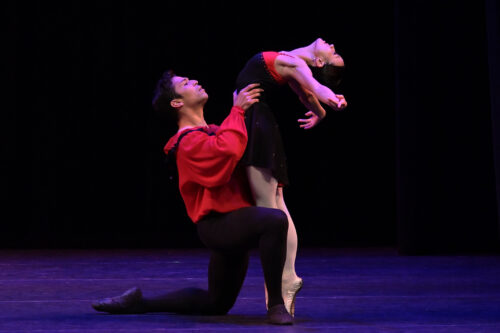 “We are trying to expand outside of South Florida.  Last year we went to the Duncan Theatre in (Palm Beach) and now we are going to Naples,” explains Baumgarten.  “Diego and I care about the product for the audience, but we are also community builders.”

Lewis says initially he was not in favor of the traveling performances.

“For me, I love the fact that now local companies are getting the chance to be seen outside of the area, even though I was originally against it,” said Lewis.  “Going viral and streaming the Sampler on video opened it up to people throughout Florida.  And dance right now on film is big all over the world.  All that grew out of the pandemic.”

He remains a dedicated part of the event.

“(Organizing the Sampler) is an act of love and I’m putting money in the pockets of dancers and dance companies, and what else could you ask for in this world?” he says.