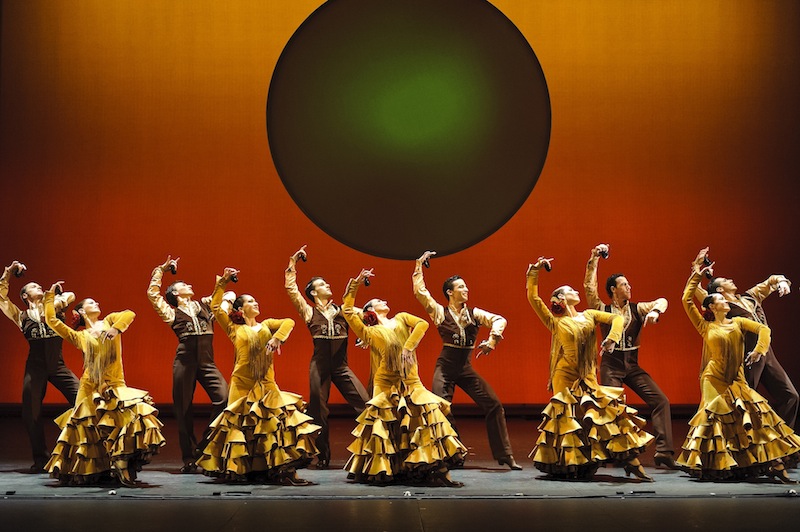 For sheer pageantry, there are few dance companies that can rival the Ballet Nacional de España. In its 40th season, with 40 dancers and 11 musicians, Spain’s effusive, no-holds-barred love letter to the international dance world returns to South Florida this week for the Arsht Center’s 11th edition of Flamenco Festival Miami.

“Suite Sevilla,” the main piece on the bill, takes the audience on a metaphorical journey through Southern Spain’s most emblematic city. As a visitor would make their way through Seville’s narrow cobblestone streets, breathing in the life of neighborhoods like the Barrio de Santa Cruz (the old Jewish quarter), gypsy Triana, or the bar-filled area around the Maestranza bull ring, so the audience will experience the different dance styles that choreographer and company director Antonio Najarro imagines these areas of Seville to represent.

”Suite Sevilla,” with music by flamenco guitarist Rafael Riqueni, was the first choreography that Najarro mounted for the BNE when in 2011, at the age of 36, he was chosen to direct the troupe. Najarro explained the structure of the piece in a telephone interview: “I created 11 different numbers in ‘Suite Sevilla’ with pas de deux, solos, and a lot of corps de ballet movements with 30 and 40 dancers on the stage.” The piece shows off many of the company’s fortes: Marine Corps precision, virtuosic castanet and footwork, and the elegance of line that is the hallmark of these incredibly versatile performers.

These are dancers who seem every bit as comfortable leaping across the stage in ballet slippers for an escuela bolera number as they are pounding out a rhythm on it with flamenco heels, and they train six hours a day, every day, to be able to present the full spectrum of Spanish dance with nuance and authenticity.

Under Najarro’s leadership, the BNE honors tradition, but has also moved decisively to embrace contemporary influences in Spanish dance. To this end, Najarro has brought in young, cutting edge performers such as Rocío Molina, Olga Pericet and Manuel Liñán (whose “El Encierro” will also be on the program in Miami) to choreograph for the troupe. These are artists who push flamenco’s boundaries, and the BNE’s promotion of their work is critical, to the evolution of Spanish dance itself and to the company’s own relevance in today’s aesthetic milieu.

“Suite Sevilla” both embraces Spanish dance’s history and reflects that forward-looking aesthetic. The inspiration for the piece, said Najarro, was “at its heart very traditional, but with a translation into dance that is very contemporary.” The work is infused with gestures and lines that move from the strictly flamenco or folkloric into a much more international language of modern choreography and line. “More than contemporary, it’s really my style of dance,” said Najarro. “People can say it’s very modern and contemporary, but we can smell the tradition…. I always say that it’s my own style of dance, and it’s inspired in my whole life.”

The section of “Suite Sevilla” called Maestranza, for example, is highly symbolic. In this pas de deux, the female dancer wears only a leotard. “We can see the whole body,” said Najarro. “and she is the bull. She’s a bull, and at the same time she is a woman. She’s transmitting the energy and the strength of the bull but [also] the femininity of the woman, and she’s playing with the torero, with the bullfighter,” he said. While decidedly untraditional, it remains a quintessentially Spanish construct.

Audiences who prefer their flamenco straight up, no chaser, may gravitate more to Sunday night’s program of pure cante jondo (“deep song”). “Temple of Light” features Carmen Linares, Marina Heredia and Arcángel, singers who are rarely seen in the United States but are iconic in their native Andalusia.

Linares, 67, is very much the grand dame of the flamenco world. Whether singing traditional flamenco lyrics or the works of poets like Federico García Lorca, Juan Ramón Jiménez or Miguel Hernández, her sound is unfailingly pure and securely moored to flamenco’s ethnic roots. Heredia, 37, is a powerhouse from Granada, with a stately presence not unlike that of a young Isabel Pantoja. The third singer, Arcángel, 40, is truly in a category all his own.

As Najarro explained, “You can hear a thousand different singers, but when you hear Arcángel you know that it’s him, because the timbre of his voice is very special. It’s a very sweet voice, but it’s not feminine. He has a very special sensitivity.” Aficionados can catch the three singers before their next gig in New York’s Carnegie Hall.

Najarro added that, as much as Miami adores flamenco, the artists of the BNE are also enamored of our city. “When we finished our last tour in Miami, we all said that we really felt very, very good,” he said. “We found that people are very open, yet very enthusiastic and we love that, because Spanish people, we are like that. When we were in the theater we felt the good energy of the audience and we felt that the audience understood our message…For me, this is the most important.”