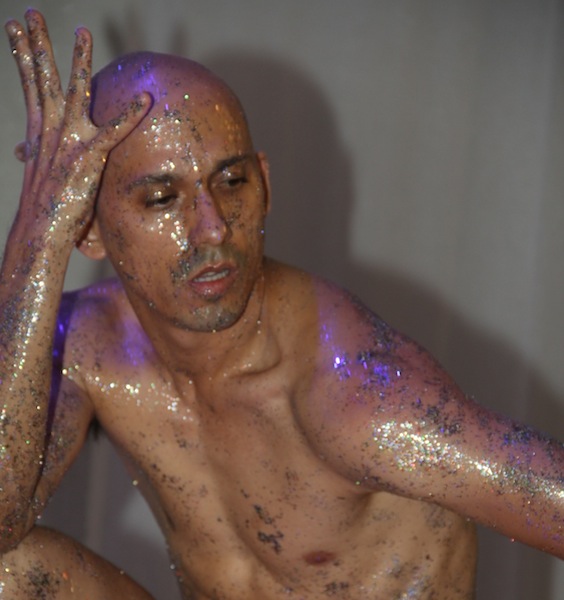 Tigertail’s month-long WATER festival is well under way. The festival highlights water’s multiple aspects and roles in human life, and is the first in a four-year project celebrating all four elements. Fire, earth and air are still to come.

This weekend local choreographer Lazaro Godoy’s solo piece, Medaka, premieres as part of the WATER festival. The title references a type of Japanese fish, and Godoy has been exploring its unusual aquatic existence through his own physical movement.

Medaka was commissioned by Tigertail specifically for the festival, and it will be Godoy’s first solo project produced in Miami. Although he will be the only performer onstage, he is joined by a long list of multi-media collaborators. His performance will be preceded by noted musician Miguel Frasconi’s Well-weathered Music, a concert on hybrid glass/water instruments.

In the week before the performance, we spoke with Godoy about his experience in creating the work.

What is the origin of Medaka?

In 2011 I was on a trip to Japan, and I encountered this medaka fish. It grows in the rice fields and in swamps, and can move to salty water as well. It can survive very strong weather conditions. It can adapt. Scientists are using this type of fish to explore and to develop. They have been sent to outer space in an aquarium. It blows my mind. I was so inspired and I wanted to do something about it. And when Tigertail asked me to do a piece about water, it was the perfect time.

How does the medaka’s peculiar nature play out onstage?

I started to work on the physicality of gravity, the limitation of oxygen, a struggle to adapt to an environment. I have choreographed a movement language for the piece. Within that, I have room to interact with a sound and image environment, connecting one with the other. And the 360-degree environment that I’m working in has no front or back. It’s kind of like I’m in a bubble. That affects my physicality with different angles and curves, and makes the space dense or thick, the density of water or air.

Sometimes I hold my breath, and there is a release of certain physical energy inside that is compressed. I’m wearing a body suit made by a friend of mine from Israel. Her name is Miki Avni. She made an incredible piece of art, I would say, because it is like a sculpture when I look at it and feel it and have it on my body. So I am reacting to that as well. It compresses my body. It is limiting me, like I’m trapped inside the body suit.

What have you discovered in exploring the life of this fish?

That it’s a trauma, some kind of pain, to adapt and adjust. But the medaka is a very strong type of fish that can survive under any conditions. They say he would survive an apocalyptic situation. Or she. Because it’s genderless as well. So they can even reproduce themselves without the male. It’s fascinating. I’ve been very isolated doing this. It’s very strange, I feel very lonely and trapped.

And it’s a solo piece too. What has surprised you most in composing this solo?

What has surprised me is that every time I go to the studio, I feel afraid. It’s a scary moment just with yourself. I’m challenging myself, having an argument with my own shadow or mirror.

I know you have a long list of collaborators. How has the collaborative process gone for you?

I am working very closely with Jorge Gómez Abrante. He’s the sound composer. He’s a young artist that I met in Miami three years ago. He has all this talent and curiosity so we started collaborating. We went to different types of water in Miami: clean water, dirty water, polluted water. He did all sorts of recordings. And then every time we went to the studio, I’d let him observe my behavior and physicality, and then I give him images from everywhere, from outside the galaxy, from skies, all sorts of information, so he knows what I’m communicating. Eventually he came with strange sounds that I couldn’t recognize. I was looking for something that I wondered, “what is it?” That’s what makes me curious, the not knowing.

And how about your work with the costume designer?

I always give some direction, words or sounds or colors. With the costume, I started with the fish. The fish has multiple layers: bones, skin, colors. And then Miki started working through that and adding to the costume pattern. It’s digital design, it’s quite elaborate and it’s hard work. She would send me the outfit from Israel. So it flew already in space. I can imagine the fish already flying!

I tried it and then sent it back to her, and she corrected it and sent it back to me. It needs to fit the size of my body. I’m very happy with what came out. Now the next layer is how I’m going to work with it on stage.