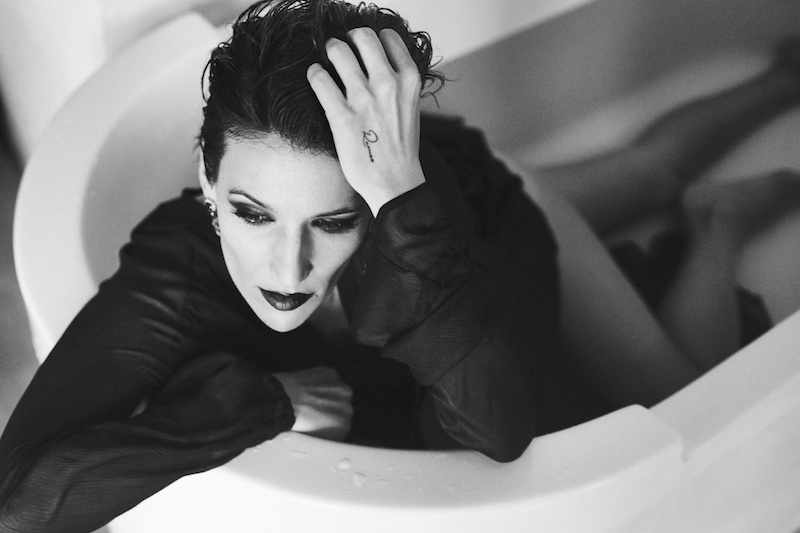 Singer and songwriter La Flaka, The Skinny One, aka Jessica Cánovas, was born and raised in Triana, a historic neighborhood of Sevilla, Spain, surrounded by flamenco music and dance. La Flaka, who will be 31 in July, grew up nurtured by the tradition but also new possibilities in flamenco. Her own music draws from many sources, from R&B and soul but also pop, hip hop and electronica.

Her range as a performer might include tangos and bulerias, classic flamenco styles, or her personal takes of “Every Breath You Take” or “Flor de Lis.” Perhaps it´s not a coincidence then, that an early significant professional engagements was with singer Lole Montoya, part of the influential Lole y Manuel duo which was instrumental in the emergence of what came to be known as New Flamenco. La Flaka has since also worked with flamenco-hip hop musician, producer and dancer Junior Míguez, now her husband, and, last year, she was a contestant in La Voz, The Voice, a popular Spanish television competition. While she was eliminated in the semifinals, she got noticed.

La Flaka will debut in the United States presenting her first album, Capricho, (Whim) as part of the FlamenGo Festival presented by the Centro Cultural Español Miami, at the Miami-Dade County Auditorium on Friday, May 20. She spoke to Artburst from her home in Sevilla.

How did you arrive to the fusion in your album Capricho, which has all kind of influences?

You are born in Triana and you are immersed in the same thing all the time, it comes a time when you need to change, you look for new things. I listen to a lot of music that has nothing to do with flamenco. Besides, flamenco has been always a music of fusion. I believe flamenco takes everything in, it’s very open. All flamencos love Michael Jackson, for example, and I’ve had people asking me “How can you like him?” and the fact is, for us, Michael Jackson sounds flamenco. So much is part of flamenco. You hear Arabic singing and you say “That sounds flamenco!” That’s why this record has a bit of everything — pop, soul, jazz even a bit of electronica. Besides, when I sing, it all comes out flamenco anyway. That’s something in the blood.

You have interpreted songs by songwriters as disparate as Sting, Alejandro Sanz, Pancho Céspedes, and Gloria Estefan, how do you pick your repertoire? Is it about the lyrics, the melody?

No, it’s not about this melody or that harmony, it’s about how they feel. If when I hear them I get goose bumps, then I know I have to sing it. And then there are I what I call the complete songs: they move me, they are well put together, have a great melody, lyrics. Those are the ones I sing. If I try to sing a song I don’t feel, it doesn’t work for me.

How was the experience with Lole Montoya and what impact did it have?

Lole is from the neighborhood. I’ve known Lole since I was a baby. So one day a few years ago, she calls me and says ‘Oye, flaquita, come with me to this festival in Portugal’ (Music of the World, 2010). And I asked her “You and me?” “Yes, yes, I believe in you, a lot.” And off we went and it was incredible. It was the first of many concerts with her. She always calls me. And to have someone like Lole take you by the hand and put you in a place like that, it’s incredible.

You were quoted as saying “I don’t believe that to be flamenco you have to wear a traditional [frilly] dress.’ Given your musical choices, your approach on stage, more than about style, it sounds like a declaration of principles.

When I get to a place they usually look at me and ask me, “And what do you do? What do you sing?” When I say “flamenco,” they look at my leather jacket, my jeans, my short hair and say “You, sing flamenco?!?” Well, yes. I sing my flamenco, the flamenco I feel. Besides, we need to bring new things to the music. Things already are so-so as it is, if we don’t look for change and innovation, what can we expect from the future?