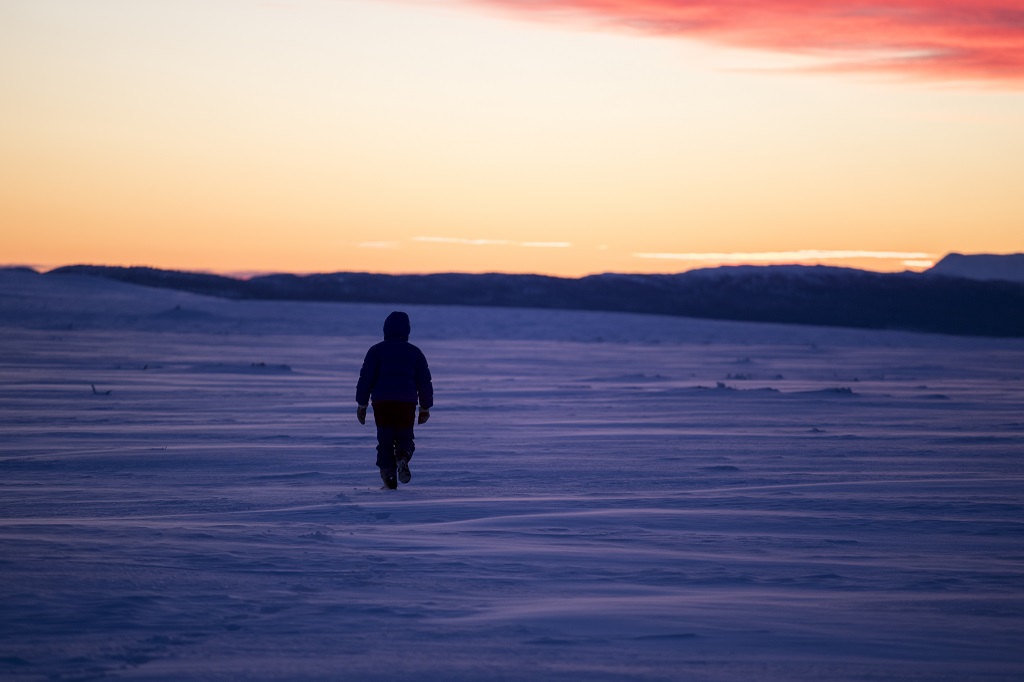 Nature has been embedded in choreographer Jenny Larsson’s life and creative work. For starters, her mother is a forest ranger. And she says, Swedes typically plan ways to spend their weekends in the wild.

When Larsson moved to Miami with her husband in 2007, she found that life in South Florida was radically different. From her perspective, we have a much more distanced relationship with the natural world—some, she observed, are even afraid of it. The contrast between home and here, for her, fed her curiosity about human relationships to nature and the ecological crises of our current era.

“Searching for Arctic Winter” is rooted in a recent personal experience. She planned a trip with her children to meet her family and see the Swedish snowfalls—an abundant and dependable natural phenomenon. She traveled to the northern part of the country where her father lives but, she says, that year there was no snow.

“We had three snowmobiles sitting around the house and we could not use them. We had to go even farther north and rent snowmobiles for the day. It dawned upon me that there’s something weird about that.”

On the topic, she references a 2015 film called “The Revenant,” starring Leonardo Di Caprio. The film was shot in extreme wilderness locations. Production was significantly delayed because natural cycles were off-schedule. “I remember reading about how hard it was for them to create the film,” she says, “because they would come to the location and think there’s going to be a ton of snow there, and there isn’t. Or the spring comes one or two months early and it gets too complicated.” The experience was so profound for Di Caprio that upon receiving one of many awards for that film, he spoke passionately about the urgent need for humanity to recognize and address climate change.

This reckoning with ecological shifts is the fuel for her current project. Developing the theme, “Searching for Arctic Winter” focuses on the mysk ox, a legendary animal native to the arctic circle.

As a child, she knew of them as animals that roamed wild in the mountains. She would imagine meeting them herself while out in the snow. Now, she says, there are only eight animals living in a sanctuary that have to be fed. “It’s a huge costly project for the state to try and save them because they are basically dying,” she says.

The food mysk oxen eat no longer grows in the arctic circle as temperatures warm, and they are subject to new diseases of warmer climates, for which they have no defense. For her, they became an apt symbol for the changes she observed in snowfall patterns in Sweden.

“We paid a guide to take us to this area,” she says, “and we were able to see them live. It was amazing of course to see them in the wild but still, it’s a symbol of things going the wrong way.” She shot video there, some of which became a component of an earlier iteration of “Searching for Arctic Winter” and will be included in the upcoming show as well.

Although nature has played a role in other works, including the recent “Forest Diaries,” she has never before worked with the idea of the animal kingdom as part of nature.

Larsson likes to work collaboratively with her performers, and for “Searching for Arctic Winter,” she had her performers do improvisational exercises. “If I know that I want to include a video of the mysk oxen, for example,” she says, “and I am super interested in their really long hair and the snow falling on their backs, I send them a video and ask them to create something based on that. It could be a poem, it could be a story, a solo, anything really. And then what they bring back informs me.”

She says, here, the body is not so much about representing humanity, but animal nature or nature in the largest sense. “I’m much more interested to see, how far can the body transcend into something more universal? It’s like peeling away culture.”

As an example, she describes working with a grinding movement. For a contemporary audience, grinding might look sexual. But she wanted to find out if she could make it a movement that represented nature. “How can I transform the dancers’ bodies so that people don’t think, oh yeah, that was sexy, but to look at it as a storm, or wheat, or an ox, or a jaw chewing.”

Her dance vocabulary is informed, in part, by butoh, a Japanese movement form that uses the body to tell abstract stories often with extremely labored movement. She describes a butoh exercise where the body transforms into the environment, “spending a day in the forest becoming a tree,” she says.

Her movement can be like this, very stripped down and exploratory of specifics. She is trying to use the body as a tool to project a simple feeling. “For this project I was really interested in shaking, the shaking body,” she says. “You shake a lot when you are scared, and we talk a lot about fear in this piece. But you also shake when you are cold.”

Complementing her movement, Larsson freely calls upon other media. Here, she conjures up the sound environment of the culture of Sweden and the arctic circle not only with snow storm sounds, but also with a black heavy metal band. In Sweden, according to Larsson, the average person listens to this type of music. And, she says, storytelling is integral to this piece. She has recorded stories set up in headphones in the lobby before the show, as well as storytellers joining her dancers on stage.

“Searching for Arctic Winter” is perhaps best described as an immersion into a place very far from Miami in every way. It’s not so much about humanity but rather, an opportunity for us to visit her beloved northern wilderness, a magical place that is disappearing.