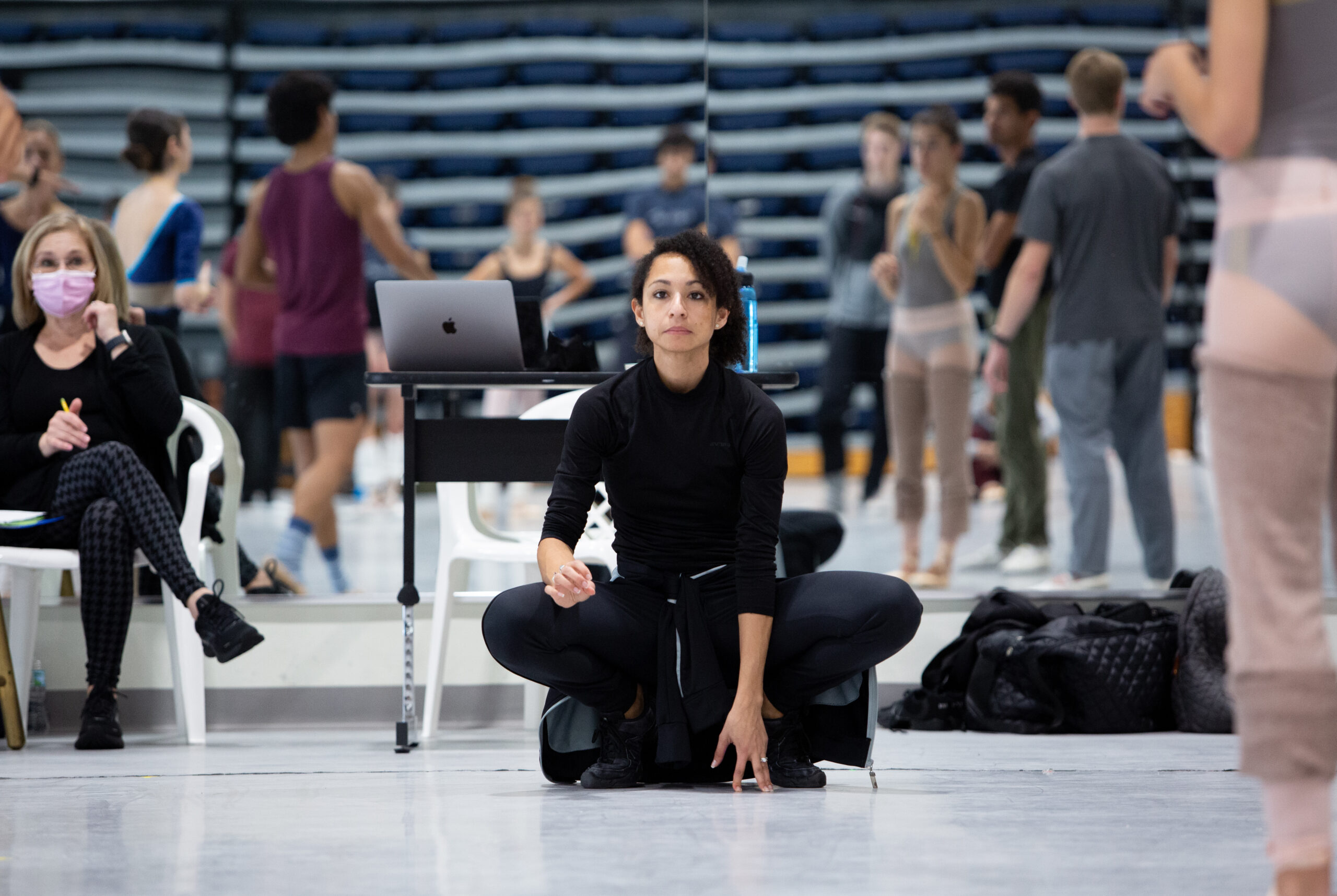 Claudia Schreier is the choreographer of “The Source,” which will be the main attraction of the last program of the Miami City Ballet season.  (Photo courtesy of Alexander Iziliaev)

Choreographer Claudia Schreier occupies a special place among the artists who accompanied us during the most devastating period of the Covid-19 pandemic. Getting up early on Thursday, November 19, 2020, to enjoy the online premiere of “Places” – her first commissioned work for the Miami City Ballet (MCB)– was one of those memorable experiences that, under challenging times, lifts your spirits and makes you appreciate the role of art in our lives.

Schreier is returning now to present “The Source” (El Origen, in Spanish), her second work for the company directed by Lourdes López. It will be the main attraction of the last program of the MCB season, including the revival of “Prodigal Son” by George Balanchine. Also, the addition to the repertoire of “Herman Schmerman Duet” (choreography by William Forsythe and music by Thom Willems) and “After the Rain Pas de Deux,” by Christopher Wheeldon, with music by Arvo Pärt.

We visited the MCB headquarters to see a rehearsal of “The Source” and speak with Schreier for the first time in person (when we interviewed her for “Places,” we did so via email). 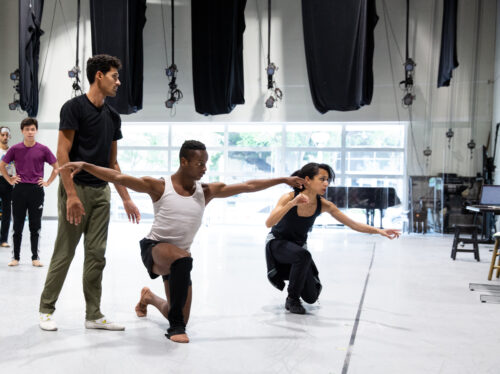 Claudia Schreier, teaching the intention of a movement during a rehearsal of “The Source.” (Photo courtesy of Alexander Iziliaev)

Almost two years have passed, and she wants to clarify that “The Source” “isn’t a ballet that comes out of the pandemic. It’s not in response to the pandemic, and it has nothing to do with that whatsoever. It’s just about talking about a relatable human experience, and it’s an adventure story because we didn’t want to make something that made the audience feel downtrodden and depressed. So, it’s not about that at all,” Schreier says.

The program notes begin: “On a foggy, cold morning in a remote harbor, eight strangers burdened by grief seek to rid themselves of their pain. Holding their anguish in the palms of their hands, they launch it into the distance — and the world suddenly rips in two…”

“And they find themselves in this new universe where they’re trying to pull out the roots of the pain but find they’ve gone to a world where it grows,” adds Schreier . “It’s kind of a source, and that’s what ‘The Source’ means. It’s the source of their pain. The allegorical structure allows us to tell the story without being too didactic. None of us (“The Source” creative team) is the kind of people who want a piece of art to tell us what the lesson is. We know we can let our audience draw their own conclusions.” 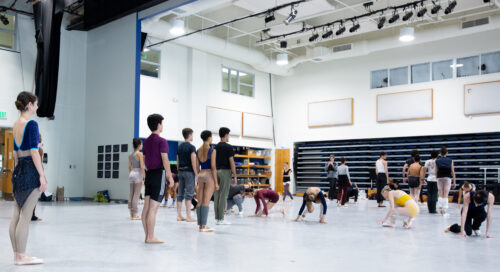 The first thing that strikes us when entering the rehearsal room is the number of people present. Nine in total, plus the choreographer and her husband, Adam Barish, who appears in the credits as the director of “The Source,” plus the 16 dancers participating in the work, which lasts half an hour.

“They were all there today,” says Barish, “because we started the technical week.” And he adds amusedly, “You came on a busy day.”

It is clear that “The Source” is a multidisciplinary project, and Barish comments that the plan is to make the ballet and a film with the same material. “When we’re making the movie, we’ll take the play out of the theatrical environment and make it for a movie audience,” he says.

Schreier  points out that their roles overlap, “basically because of how we designed this project.” Barish states that his job is not to tell the choreographer what she should do but to “build her a playground.”

When we ask Schreier what her most significant influence has been, she doesn’t hesitate, smiles and points to her husband. “I have learned a lot about myself as an artist and person through my relationship with Adam. Adam is very musical, and thanks to him, I have started to internalize music differently. I have even started to see movement differently thanks to him.” 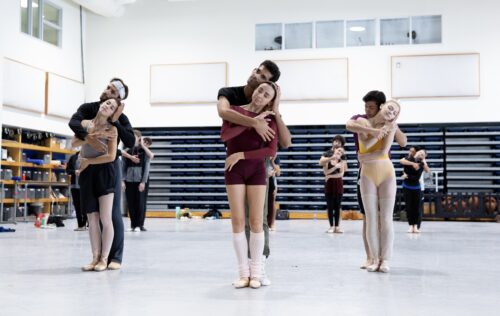 “Sometimes it’s just a gesture,” Claudia Schreier says. Here, with MCB dancers during a rehearsal of “The Source.” (Photo courtesy of Alexander Iziliaev)

The sound universe of “The Source” opens with “A Nearer Sun” by Riley Mulherkar, advances with “Outrage at Valdez” by Frank Zappa, “Summerland” by William Grant Still, and a piano quintet by Canadian composer Alexina Louie. It closes with a custom suite based on Julius Eastman’s “Femenine,” arranged by Gary Sheldon.

She confesses she’s arrived at rehearsals with “a 50-page Google document with each grade counted” but acknowledges that “you have to leave room for adjustments” and adds, “sometimes it’s just a gesture.” In this case, she thought it was beautiful how someone was hugging someone in the back of the room during one of the rehearsals. Then she did her own version of it, which was incorporated into the piece. 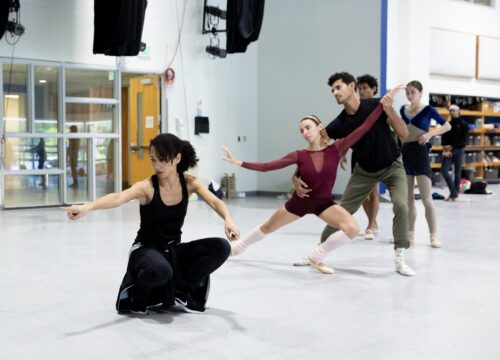 Claudia Schreier, rehearsing with Nathalia Arja and Renan Cerdeiro. According to the choreographer, “it was intentional to keep them together for quite a while throughout the ballet.” (Photo courtesy of Alexander Iziliaev)

Regarding the work with Nathalia Arja and Renan Cerdeiro, who give the impression of being the protagonists of “The Source,” Schreier explains that “to a large extent, this is an ensemble ballet, but I think we needed a team leader. We also wanted a narrative anchor to begin and end the work. So, it was intentional to keep them together for quite a while throughout the ballet.”

Schreier  believes that “Miami dancers can just do everything, which is amazing.” Moreover, she points out, “they are very special and take my work to another level. I love that.”

Finally, we ask what choreography is for her. “It’s joy,” she exclaims. “It’s all I know, and I’ve ever known. It sounds a bit cheesy, but I can’t imagine doing anything else, and I’ve been creating dances since I was a kid.”

Definitely, the artist’s enjoyment must be contagious. When we say goodbye to her and Barish, we leave with the impression of having spent a fun afternoon with a couple of friends that we already want to see again. It’s a joyous feeling of openness and familiarity that we suspect “The Source” will manage to convey to the public.