Ilana Reynolds Is At Home in the Red Velvet Theater 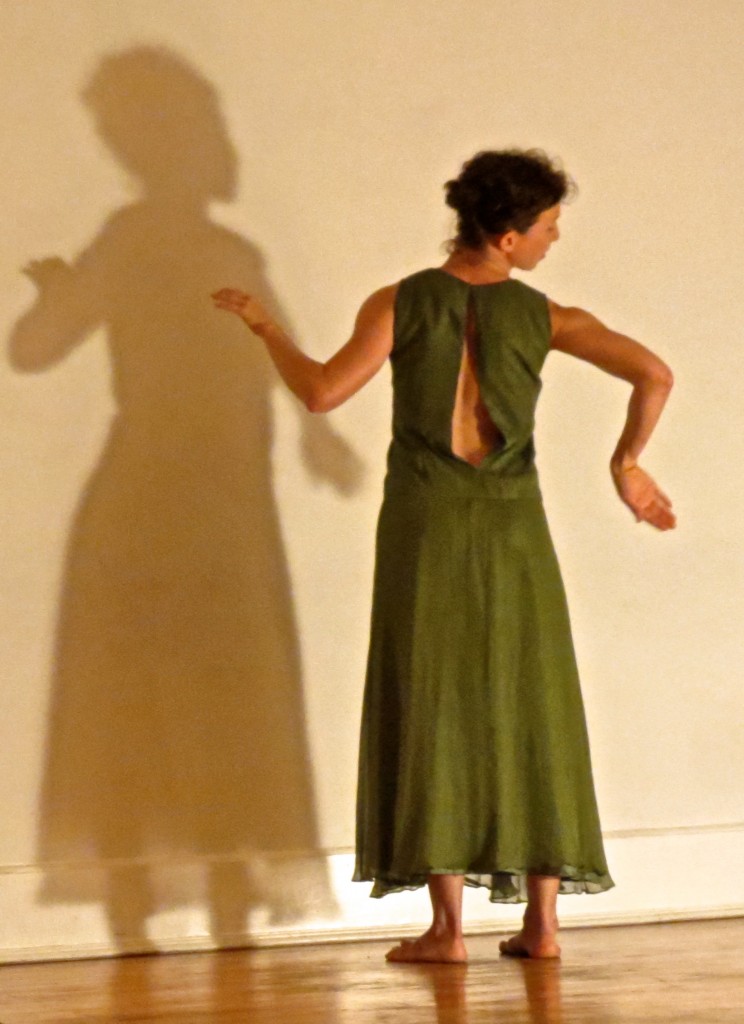 Every night for the past few weeks, Ilana Reynolds has pulled a mattress out of the closet and plopped it on the hardwood floor where just hours before she had been rehearsing or even performing. Reynolds is not only in the midst of a 3-week at the Red Velvet Theater, but is literally “in residence” — sleeping in the erstwhile dining room that serves as a stage in a spacious home in Little Havana. Reynolds is a long-time collaborator of funky puppeteer Pablo Cano, her host as both homeowner and proprietor of the intimate Red Velvet. A former fixture on the Miami dance scene, Reynolds took her talents to Berlin a year or so ago. She is back in town for a month to share a series of solo dance works, as well as inspired improvisations with her Miami friends. https://artburstmiami.com/wp-content/uploads/2013/11/Ilana-solo-e1383398714858.jpg Ilana Reynolds performs on the floor where she plops her mattress at night. Photos: Cynthia Burgess. Last Saturday, Artburst slipped into two wooden chairs in the first of three rows crammed into one end of Cano’s living room. The most agile in the audience of maybe a dozen people sat on wooden beach loungers on the floor. Reynolds emerged from a doorway in the dining room, now bare of all furnishing, including her mattress. In a flowing, green sundress that flowed almost to her ankles and left her arms bare, she glided across the floor. The smooth, utterly controlled, articulation of her ankles and feet made it seem almost as though she was ice skating. She appeared utterly, serenely, in her own world, her back often to the audience and her face seen only in profile. Her self-containment heightened the sense of voyeurism, as though we had all snuck into the house and come upon a woman dancing alone. Moving to the opposite side of the living room from the audience, Reynolds adopted a more deliberately dramatic persona for the second solo. She squeezed into a tiny chair wedged between the wall and a small table stacked with identical, black-bound books. A recorded monologue of Reynolds describing what she feels on returning to her room in her childhood home played, as Reynolds perused the books, then rearranged them on the table and the floor. The setting in an actual house gave the piece a sense of intimacy that no stage set coudl ever produce. Reynolds curled up on the chair in fetal position, before moving across the floor in search of something, recreating the tension between a wanderer’s love of hearth and lust for places unknown. The evening ended with an ensemble piece. Reynolds danced a duet with Priscilla Marrero that overflowed the living and dining rooms and went right out the window. The dancers were accompanied by saxophonist Matthew Taylor, who used a door to follow the dancers onto the Red Velvet patio. The audience sat staring at the empty room for a few seconds, before taking a cue from Pablo Cano and heading outside as well. There bassist (and Artburst contributor) Dan Dickinson waited. Earlier in the evening he had greeted all the guests at the gate to Cano’s house, playing solo bass for a half hour as the audience arrived. Now he stood at one corner of the patio, Taylor at another, while the dancers wended their way amid buckets and basins filled with water. Each dancer responded to the melody and rhythm of the nearest musician, matching the twists and turns of the sound with their bodies. Reynolds splashed in a basin, while Marrero raced to the top of a treehouse adjacent to the patio and danced in candlelight. Inside, outside, sitting, standing, the audience moved with the performers as they transformed a home not into a theater but into a magical realm, beyond the reach of getting and spending, where beauty is not bought but brought forth through the joy of movement and sound. Ilana Reynolds presents a final night of solos and a collaboration with Rachel Carroll at the 8pm, Saturday, Nov. 2, at the Red Velvet Theater, 2485 SW 5th Street, Miami, FL 33135, Tel: 305.642.1774. Tickets cost $35 general, $10 artists. Seating limited to 15.