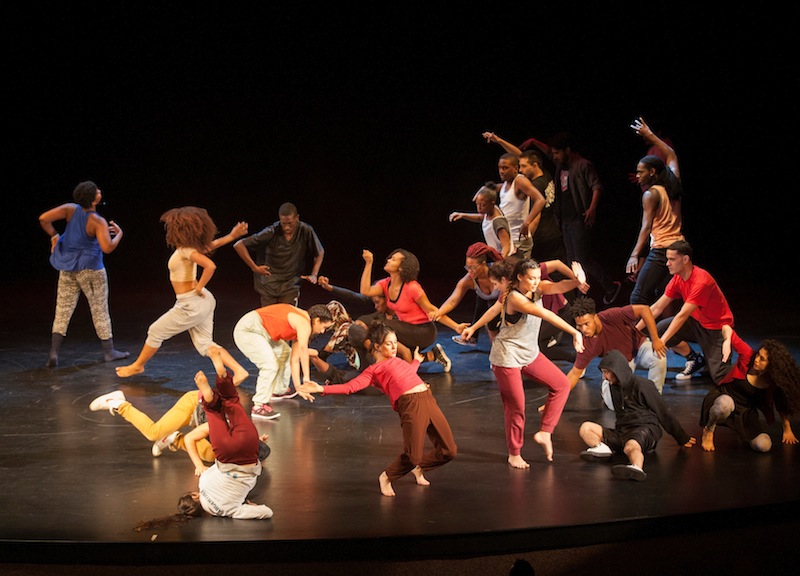 Combinado Argentino de Danza’s recent performance at the Colony Theater, produced by MDC Live Arts, was billed as a deconstructed blend of hip-hop, contemporary dance and Malambo (an Argentine folkloric dance). Such a diversity of styles could be challenging to mix, but the company’s fantastically athletic performers pulled it off with style.

Under the direction of Andrea Servera, Combinado Argentino de Danza is a handful of dancers, a beat boxer and a DJ. Each one has the skill and stage presence to hold a solo, but more striking was the unity of the group. Even though the choreography was largely improvisational, each performer seemed to have internalized the movement language of the group.

Combinado Argentino de Danza seems to have a heart of hip hop, which is above all about community. In the after-show Q&A, the dancers explained how they all met at a weekly street fair in Buenos Aires. After seeing each other week after week, they got to know each other and found common goals and passions.

Hip hop may have come from the United States but it has spread all over the world. Shake the Dust, a recent documentary by journalist and filmmaker Adam Sjöberg, produced with hip-hop superstar Nasir “Nas” Jones, portrays hip hop as a truly global movement with remarkable similarities no matter where it takes root. (If you haven’t already seen it, you should Google Shake the Dust right now and rent it through Vimeo). In this documentary, dancers from Uganda to Cambodia to Colombia all talk about hip hop as the center of their life, even though their respective cultural backdrops couldn’t be more different. Each person says it keeps them out of trouble, gives them a sense of family, and plus, it’s cool. On the surface it is a dance and music form with a distinctive style, but underneath it is much more than that, a way of life. Combinado Argentino de Danza seems to be infused with this same ethos.

While they obviously have strong artistic direction and creative leadership, Combinado Argentino de Danza’s performance felt like a hip hop cipher — a group circle supporting the emergence of an individual’s own personal style, whether in break dancing or verbal play. And more literally, break dancing with a punctuation of badass beat boxing from Milo Moya, were the backbone of the company’s group style. At the same time, the sophistication, storytelling, and stage composition of contemporary dance were present, as well as the folkloric style of Malambo. None of these styles was presented in its strictly traditional form, and the blend was fluid.

The performance was definitely contemporary in the largest sense of the word, and not just in dance terms. It didn’t feel like a rehashing of old ideas, instead displaying the kind of multiculturalism that dancers in this era naturally come to embody through their own diversity of experiences and training. The overall effect was original, accessible and impressive entertainment. It comes from the street but it is worthy of the stage. MDC Live Arts must be credited for bringing yet another world-class dance company to Miami.