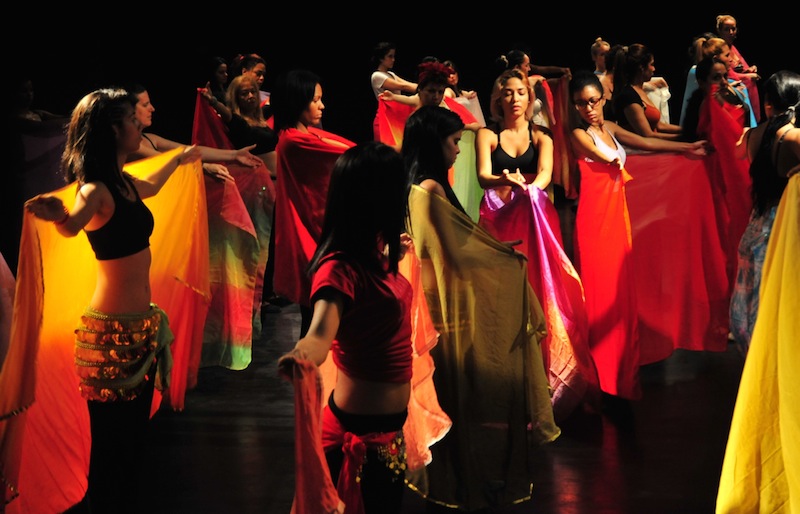 Awash in sunlight, around 50 women stand in a circle on the rooftop performance space of Casa Gaia in Old Havana, Cuba, as part of a belly-dance festival. Biodanza facilitator Karen Rodríguez guides them through a series of improvisational movements. Biodanza, a system developed in Chile, utilizes music and movement to deepen one’s self-awareness. Rodríguez encourages the participants to walk around freely, dancing and moving as they wish. Some whirl around extravagantly; others glide past with elegant reserve. Dancing pairs or small groups form for a few seconds, then break off into new formations. This cross section of Cuban women varies widely in shape, size, age, and color, a diversity that’s not uniquely Cuban, but still shines in unique contrast to the Western image of belly dance as young, slender women in skimpy costumes.

Tiffany “Hanan” Madera selected Rodríguez’s Biodanza workshop as the “heart opener” to the first annual Havana Habibi Festival, three days of belly dance workshops and performances in Havana. The festival, co-founded and directed by Miami-born Madera and hosted by her counterpart in Cuba, Gretel Sánchez Llabre, took place December 15 to 18, 2016. On the heels of Fidel Castro’s death and the state-imposed, nine-day period of mourning that followed, the mood in the workshops was ebullient. Similarly, the attitude on the streets was not one of mourning. La Plaza De La Catedral and the narrow, winding streets of Old Havana bustled with tourists and Cubans going about their daily business. One 27-year-old graduate from the University of Havana, who asked to remain anonymous, succinctly stated what several young people expressed over the course of the trip: “Fidel’s dead. What shame. Now what?”

Well for one thing, dance, and more importantly, community. Madera’s approach to belly dance is strikingly different from the Western construction of belly dance as a highly commercialized, eroticized form of entertainment: “I think that one thing belly dance offers as a movement practice is this metaphor where our bodies that are often the sites of pain and the sites of violence are also the sites of healing, both locally and personally. It can then become universal and communal.”

When Madera began to travel to Cuba in 2003 to give dance workshops, she discovered a group of women interested in embracing belly dance as a healing modality and an empowering experience. Sánchez Llabre, one of those women, is the founder of Cuba’s first professional belly dance company, Cuban Soho. She also directs a school that offers belly dance classes to girls and women from ages five to sixty. For her, the idea of being a Cuban woman has always been very much about being una luchadora or fighter, but that struggle was often confined to the day-to-day worries of family, food, and survival. “Now I have a focus,” she explains, “because if my struggle is helping other women move forward, it’s worth it. You feel like you’re not fighting for yourself, you’re fighting for other women because you’re giving them the tools so they can find happiness.”

The artistry of dance, grassroots activism, and her own personal story of identity are the pulse points of the documentary Havana Habibi, a collaboration between Madera and independent filmmaker Joshua Bee Alafia. The film documents Miami-born Madera’s trips to and from Cuba despite her Cuban family’s vocal disapproval. On a Friday night, Havana Habibi made its debut to a packed house at Fábrica de Arte Cubano, a trendy, mixed use space in the El Vedado neighborhood of Havana. The film received a standing ovation. In the audience, Esmely Sarduy, a medical student at the University of Havana, acknowledged the fragmented nature of Madera’s journey from the Miami of her birth to the Havana of her heritage, but Sarduy also found it unifying: “Tiffany Madera’s story is a beautiful story and in a certain way it’s already ours due to the number of followers and souls who have been captivated by the magic of belly dance.”

The documentary also reveals Madera’s experience with sexual assault and trauma. “Havana Habibi is a very personal film where I really put myself out there in the service of transformation and in the service of showing a model of healing,” says Madera. It’s this experience that influenced her unique approach to belly dance and her vision for the festival. She handpicked professional dance instructors from the U.S. who share her vision that belly dance can be grounded in feminine empowerment and that it can even become a modality for healing.

Tamalyn Dallal, a professional dancer based in New Orleans who teaches dance workshops internationally, was the director of the Mideastern Dance Exchange on Miami Beach in the 1990s, where Madera took her first class. Dallal believes that Habana Habibi is paving the way in Cuba for belly dance to be performed without objectifying or commodifying women: “I think future dancers won’t have to fight against stigmas, which is really amazing because this is a dance form that is really stigmatized throughout the world.”

At a panel discussion on the final day of the festival, Meiver De La Cruz, visiting professor of dance at Oberlin College, added yet another layer of meaning to this tapestry. She spoke about the documentary and the implications of a burgeoning belly dance scene in Cuba. De La Cruz explained how dance can be symbolic of larger geo-political forces, highlighting the way in which women’s bodies are used as sites of political and cultural conflict: “The belly dancer and la mulata — both iconographies that coalesce in Ms. Madera’s body in particular, but also in many of us present here today as Caribbean women and dancers – are very powerful ideological objects that have been utilized by one side to say that the other oppresses women; meanwhile, the other side uses these bodies as evidence of political freedom, respect, or the protection of women.”

The eroticization of Cuban women, especially mixed race women, is deeply embedded in Cuban society, especially when it comes to performing sexuality through dance. Throughout the festival, Cuban women spoke out, poking holes in the stereotypical image of the sensual Cuban dancer. Rodríguez, the biodanza facilitator and one of Madera’s original students in Cuba, says that despite being known as extroverted, fun-loving, and very communicative with their bodies, she has realized that this apparent Cuban sensuality is often superficial: “When you have to communicate from a deeper place, from who you really are, you realize that it’s not so real, or for example when you go to communicate with your eyes which are the portals to the soul, you realize that most people can’t hold your gaze. If it’s not something they’ve learned because they know how to dance very pretty, then they don’t do it. You realize that it’s a society that supposedly is very open, but that also has its limitations and repressions.”

Lisette Vila, Director of Proyecto Palomas, a Havana-based organization whose mission is to protect a number of at risk populations such as members of the LGBT community and domestic abuse survivors, asserts: “That you’re sensual when you walk or that you’re sensual upon discovering some part of your body doesn’t mean you’re liberated and that you know your sexual rights.” Vila goes on to emphasize that for Cubans understanding their rights as sexual beings is fundamental to embracing and exercising their human rights.

Another professional dancer and invited instructor, Myra Krien, has made it her mission to bring awareness to younger women, educating them about their rights sooner than later. Krien directs Pomegranate SEEDS (Self-Esteem, Empowerment and Education through Dance), an after school program in Santa Fe, New Mexico, that offers belly dance instruction to teenage girls along with discussion groups on financial literacy, sexuality, and media awareness. “I pull them in with the dance. That is my hook,” Krien jokes, “But once I have them, they discover that what really makes a person beautiful is when she is expressing herself in a way that reveals who she truly is.”

As the Havana Habibi Festival drew to a close and the panel discussion wrapped up, the same women who danced in circles on the first day of the festival one by one took the microphone to share their perceptions and experiences. Many told stories of mustering up the energy, resources, and courage to put work, husbands, and family temporarily on hold to participate in the festival. One woman cried, saying that originally she felt she couldn’t dance because of issues with her weight and health problems, but that in the end dance had brought her closer to herself.

Many of the participants expressed surprise and joy at having discovered this dance form from the other side of the globe transported to them via one intrepid Cuban American from Miami. “I was very timid,” says 19-year-old, Yoralis Vicente Chaviano, “and through Arabic dance I’ve learned that when I dance I can open myself up and give more beyond what I am. I dance and I feel like I’m floating.”

Catch Madera performing under her stage name “Hanan” at the Lebanese + Egyptian Love Affair, a showcase of local Middle Eastern dance artists that will take place on Sunday, Feb. 26 at 7:00 p.m. at the Flamingo Theater, 801 Brickell Bay Dr. General admission is $35. Tickets can be purchased at www.lebaneseloveaffair.com or www.flamingotheater.com.