Ground (In Progress):’ Moving Beyond Borders During Black History Month 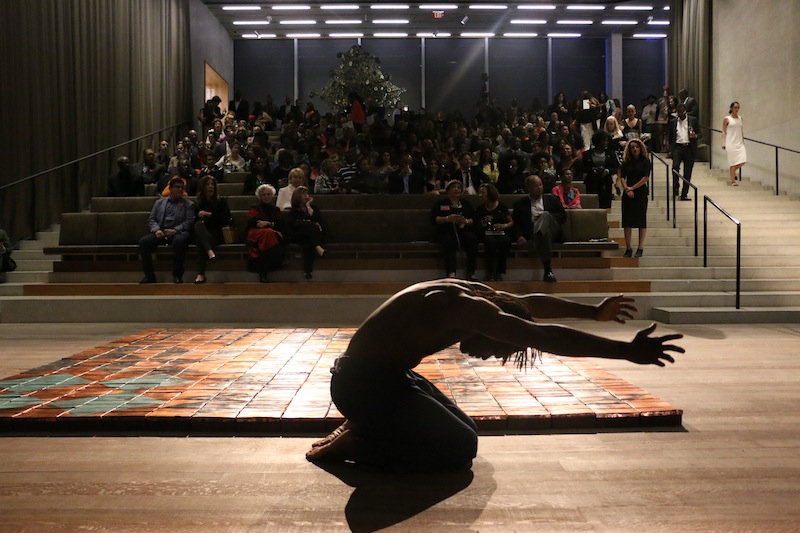 Symbolism exists everywhere in New York-based artist Nari Ward’s work Ground (In Progress): in the movement of the dancers and in the art piece’s interactivity. Thursday night’s performance at the Pérez Art Museum Miami fused compelling art, powerful dancing and the opportunity to reflect on a harrowed period in American history.

Ground (In Progress) is a copper-topped, floor-based sculpture decorated with painted geometric shapes. It is believed that the Underground Railroad used these symbols as directional codes. Ward explains that these insignias “were like pictograms; what impressed me was the history and the act of resistance that they represent, and also, in some ways, trust. [Escaped slaves] had to trust that the symbols were correct.”

Ward points out the different codes as we walk across the quilt-like surface of the work. Codes include the Crossroads, the Wagon Wheel, the Log Cabin, Flying Geese, the Drunkard’s Path and the North Star. The North Star, always pointing escaped slaves north, was the guiding light. These symbols were codes for safe houses (“stations”) along the Underground Railroad. It is fitting that this performance was presented during Black History Month.

Visual artist Ward is no stranger to dance; his background includes collaboration with dancer, choreographer, and visual artist Ralph Lemon. “I wanted to facilitate the environment that [the dancers] interact with. To find a historical connection, then find a way to bring it somewhere else — to another expectation,” Ward says.

This site-specific performance took the dancers and audience beyond the limitations of the proscenium stage. Each of the four dancers — Heather Maloney, Sasha Caicedo, Willie Williams, and Jasmine Howell — brought a different and distinct interpretation to the piece.

Maloney focused on the piece’s architecture. Her movements covered the surface of the platform and had a sense of migration. At times, her arms fluttered like a bird about to take flight. She later explained that her family is Quaker, and she thought of this as she danced on the symbolic “stations” of the quilt.

Caicedo displayed a tender interpretation of a young woman in a terrible place during horrific times. At certain moments she appeared untouched and vulnerable to her situation as she moved to Mahalia Jackson’s “Summertime.” Its tenderness is almost tragic.

Williams’ performance, set to Nina Simone’s rendition of “Strange Fruit,” was raw and visceral; “I was trying to give the audience an image of slaves,” he says. His poses and movements evoked the stark reality of slavery and the desperate yearning for freedom.

Howell’s interpretation, danced to a melody by Mark Nelson, filled the space with grace, beauty, and inner strength. She captured the moral compass of the sculpture and moved with a determined certitude — as if she carried some kind of secret knowledge.

Ground (In Progress) is a part of larger body of work by Ward, a recipient of the Guggenheim Fellowship for Creative Arts (1992). Born in Saint Andrew’s, Jamaica, Ward displayed a fascination with the Caribbean diaspora through his work. The reference points for many of his pieces include the traditions of Jamaica, the use of urban spaces, performance and the body, and migration and movement.

Patrons attending the performance also had the opportunity to view the opening of a new exhibition at PAMM: Beatriz Santiago Muñoz’s : A Universe of Fragile Mirrors. Her documentaries captures the “ironies of post-colonial conditions in the Caribbean.” She uses ordinary people and her camera to capture the social environment of communities and public areas. Her projects deal with the distinctions “between ethnography, fiction, and documentary film.” She has worked in Haiti as well as her native Puerto Rico.