‘Fuerza Flamenca:’ Bringing Flamenco Back to its Roots 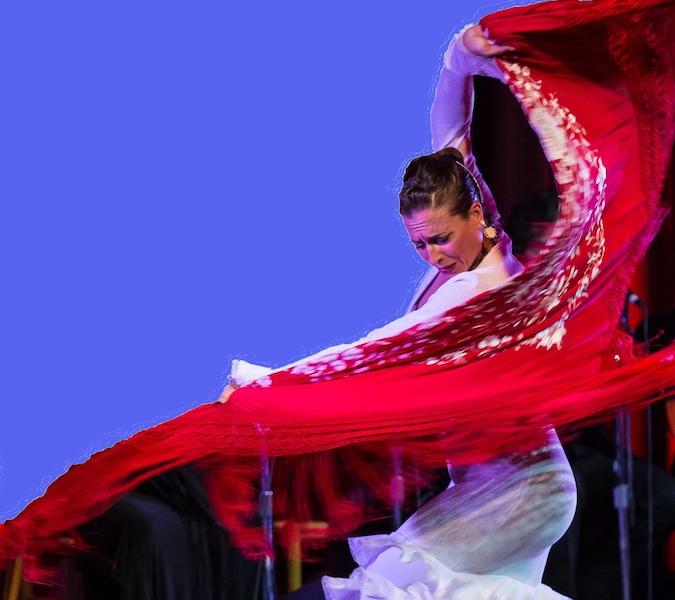 When Ballet Flamenco La Rosa takes to the stage this weekend, it will present a program based on traditions which were handed down through the ages. A program filled with the mysteries of flamenco’s past and the passion of the artists.
Flamenco is a living art form; one which was inscribed by UNESCO in 2010 to be on the Representative List of the Intangible Cultural Heritage of Humanity. Flamenco’s roots originated from many diverse regions: North Africa, Southern Europe and the Near and Far East. Throughout the years flamenco has strayed from its roots — often into new and exciting territory. Flamenco puro (pure flamenco) brings the art form back to its roots. “Flamenco puro is a way of life and a state of mind,” says guitarist Israel Heredia of Ballet Flamenco La Rosa.
The company is presenting a program of pure flamenco at South Miami-Dade Cultural Arts Center this weekend.
What does it mean to return to the roots of flamenco? For company dancer Mayelu Perez, it means to “find and recover its essence.” Fellow dancer Jorge Robledo says it means to “go back to the movements — the way the movements were originally; back to the authentic movements.”
“Flamenco in its original form is an individual art form — with the expresssion of the individual,” adds Ilisa Rosal, artistic director of Ballet Flamenco La Rosa. “[Artists] have to go back to the individual expression that is the root of flamenco…the program will include solos and choreography and stays true to the root of flamenco — to all that came before — the whole heritage of flamenco.” The history of flamenco has only been recorded for the last 200 hundred years or so. Much of what is known prior to that was handed down by stories and legends — much like the flamenco song itself.
Flamenco puro is flamenco that is unadulterated. It is often seen in the tableaus of Spain, where gypsies still perform. It is within the context of flamenco puro that the audience can experience seeing duende in a performer. A heightened sense of emotions and passion seem to flow through the movements of the dancer, the cries of the singer and the strumming of the guitarist.
Many writers and poets have written of the mysterious qualities of duende, an elusive element which the Spanish poet Federico Garcia Lorca said “could only be present when one senses that death was possible.” Does this mean that a flamenco artist is like a phoenix — reaching deep depths before rising anew during each performance?
While flamenco has undergone changes throughout the years, the lifestyle of a flamenco artist has remained relatively unchanged. Much time is spent in rehearsal and private practice. Singer and company member Yanela Gomez comments that she is “always working on repertory.”
Heredia adds that he is “a slave to my guitar.” Each day he tries to spend two hours practicing technique; two hours on repertory, and two hours on composition.
UNESCO gave flamenco a rare and esteemed honor; now Ballet Flamenco La Rosa is bringing it home — back to its roots and its soul.
Ballet Flamenco La Rosa: Fuerza Flamenca; Saturday, July 22 at 7:30 p.m. and 9:30 p.m. and Sunday, July 23 at 3:30 p.m.; South Miami-Dade Cultural Arts Center, 10950 SW 211th St., Cutler Bay; tickets $25-$30; 786-573-5316.