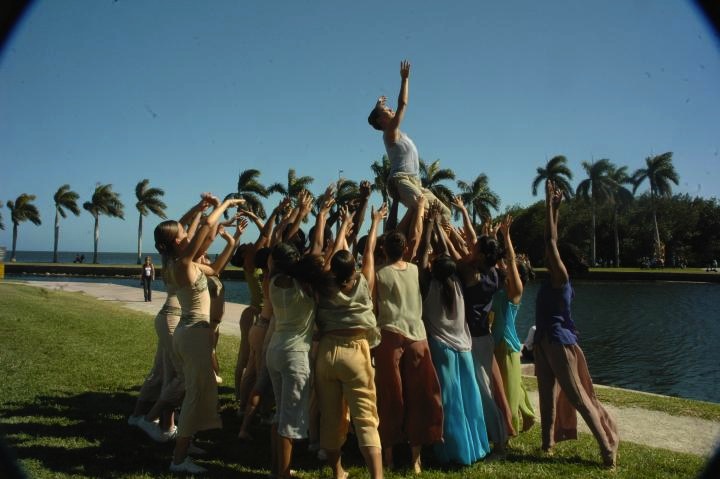 If Dale Andree could come back as an animal in her next life, she’d be a seal. The National Water Dance founder and artistic director, a self-confessed “water baby,” has a kinship with H20 and it’s that draw that helped her to realize an artistic vision that has now become a national force of nature.

She created the Florida Waterways Dance Project in 2011, a collaborative initiative of site-specific performances inspired by Florida’s waterways, and in 2014 the dance project evolved into a nationwide event, National Water Dance. The collective of movement choirs will perform simultaneously for the second National Water Dance at 4 p.m. on Saturday, April 16, near or on bodies of water – from rivers, lakes and oceans to fountains and small streams. There are dance performances set for Florida at the edge of the Everglades, choreographed works to tribute Ohio’s Cuyahoga River that feeds Lake Erie, and dance pieces set at Louisiana’s Bayou DeSiard, and Indiana’s Jordan River, a creek that winds through the Indiana University campus in Bloomington. The biggest expected gathering for National Water Dance will be hundreds of students from the largest school district in the United States, Los Angeles Unified School District, at a fountain in L.A. National Water Dance performances are planned from Alaska to Hawaii in 32 states

What began in Florida, and specifically in Miami with Andree and founding producer Daniel Lewis and Miami Dance Futures, now has a collective of 2,000 co-creators across the United States presenting site-specific performances with dance as the main art form.

“My desire was to inspire artists to realize the power of art to bring awareness to environmental issues, particularly water,” says Andree.

In Miami, dancers, singers and musicians will present a water dance creation at the Deering Estate in Cutler Ridge, produced and choreographed by Andree. “What better place?” Andree says of Deering Estate, the 444-acre environmental hub located along the edge of Biscayne Bay. “We’re right at the mouth of the issues we’re dealing with — salt water intrusion and the drying up of the Everglades. But then there’s the beauty of the estate that takes hold of you, too, and with 164 performers, it will be mesmerizing.”

For each of the site-specific groups around the country, Andree encourages autonomy in the creation of the singular water dances; however, she does have a style guide of sorts, a “movement phrase” that serves to connect every dance. On the National Water Dance website, Andree has created movements meant to be used by each group that were formulated from gestures sent in by participants inspired by their water sites. She’s asking that each group begins and ends their dance with the same gesture. “We created an archive of movement – about six or seven minutes long, which is available for people to resource if they want to use it. They can take what they want from it.”

While the growth of Water Dance in its second incarnation is promising, Andree says it’s difficult to quantify the impact the event had in 2014 or will have this year. She wants the scope to expand to include more collaborations with environmental groups and, she says, “That’s happening.” This year, she also wants to pay close attention on gathering information from the groups on “what worked and what didn’t,” and dig deep into how to take the awareness created by National Water Dance. “With every manifestation, we create a larger voice. It’s not of those things where you’re signing petitions and you get 100,000 names that you take to the legislature. With this many people involved and with this many people being reached, we are making a difference, but in ways that are hard to define. We need to keep building it and just keep it moving.” The next National Water Dance will be in 2018.

She’s more than proud that the dance and water collective was born in Miami. “This is ground zero on climate change and rising sea levels, so it’’s even more important that we are bringing awareness nationally to this location.”

National Water Dance will be livestreamed on YouTube from sites around the country. Performances are free. National Water Dance Miami is at the Deering Estate at Cutler, 16701 S.W. 72nd Ave., Miami, Saturday at 4 p.m. Gates open at 3:30 p.m.; www.nationalwaterdance.org.