For “Binomio,” a Flamenco Friendship Extends from Studio to Stage 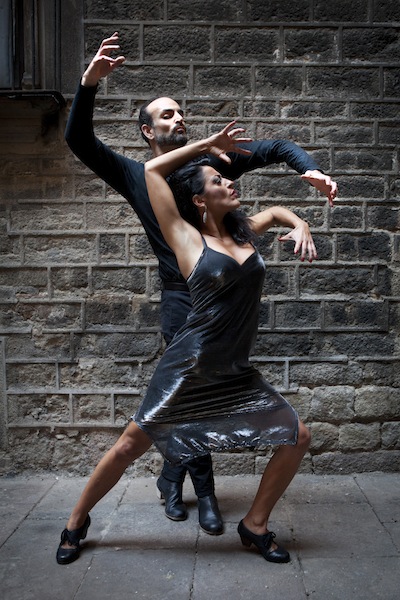 Great friendships can nurture and prod an artist to make greater work. Think Pablo Picasso and Wifredo Lam, James Baldwin and Toni Morrison, Tina Fey and Amy Poehler. Such is also the case for flamenco dancers Francisco Hidalgo and Anabel Moreno, who perform this weekend at the Miami-Dade County Auditorium as part of the ongoing FUNDarte collaboration with the Madrid-based Casa Patas Foundation.

Hidalgo said in a telephone interview that he met Anabel Moreno at his very first gig in Madrid, when she shared the stage with him at the famous tablao Corral de la Morería. The two became fast friends. “There’s rarely a day that goes by that we don’t talk on the phone or get together,” Hidalgo said. “We’re neighbors, too.” They live just a few minutes walk from Casa Patas, which is an arts foundation, conservatory and flamenco venue.

Familiarity, in their case, has bred only respect. Hidalgo described Moreno as “a dancer who is very personal, very versatile…I admire her very much for her artistic quality.” He said that the artistic affinity they have for one another was the inspiration for “Binomio,” the concert-length choreography they will be performing together.

The piece itself is thus an extension of their friendship. “Let’s say it’s something of a conversation between the two of us, dance-wise,” said Hidalgo. “I know her way of dancing, she knows my way of dancing…everything comes about because of how well we know one another.” They have, in fact, worked together so often in Spain that they can often predict each other’s movements on stage: “With a look she knows what I’m about to do, I know what she’s about to do; it’s chemistry, it’s the energy that flows between the two of us.”

While they are personally and professionally very close, their dancing styles are actually quite different. Hidalgo is an exceedingly elegant performer who looks as aristocratic (and as handsome) as Spain’s King Felipe. His line is as graceful as that of a classically trained ballet dancer, every angle of his neck and limbs precise and clean. With his zen-like focus, he can dance very slowly and never lose the audience’s interest. His dignified style contrasts starkly with the theatrics of contemporary bailaores (male dancers) like, for example, Farruquito, who often throws himself into the hair and shakes his long mane of hair out like a wild colt.

While also a master technician, Moreno, unlike Hidalgo, occasionally lets on that she knows how to get down and dirty. Hidalgo explained it more eloquently, pointing to regional geography: “Anabel is from Granada. It’s a more savage style. I was born in Cadiz, but I trained in Seville, so I consider myself more Sevillian in my dancing. Every city [in Andalusia] has its own imprint.”

In a promotional clip from “Binomio,” Moreno does a slow, sensuous vuelta quebrada, a so-called “broken turn,” her back beautifully arched. But Moreno adds a repeated suggestive flick of the shoulder that manages to come off as both funny and flirtatious. Later, she exits in a deep backbend, throwing her head back all the way so that she is looking at the audience, upside down, as she goes off. Moreno is unafraid of laughing at herself, but she also makes sure to let you in on the joke.

In contrast with Moreno, it is hard to imagine Hidalgo cutting loose and improvising, but in fact he said those unplanned moments are precisely the ones he looks forward to most onstage. When flamenco artists improvise as a group, how they stay together down to the final beat is always a mystery to the uninitiated. “Within flamenco there are codes that you must know,” Hidalgo explained. “It’s like a magical language that comes up in the space and that’s where everything happens. Think of it — in tablaos, nothing is choreographed. One day, you have one singer and one guitarist, the next day you have another singer and guitarist and you don’t rehearse anything. You know your profession, you know the codes, and it is all improvisation.

In “Binomio,” Hidalgo left space for just such passages of pure inspiration. “There are some parts in all concert performances that I always like to leave a bit free so that we don’t feel limited to a series of movements that we’ve learned,” Hidalgo said. “You let yourself go.”