‘Flowers for Spring:’ Remembering Those Who Can No Longer Remember 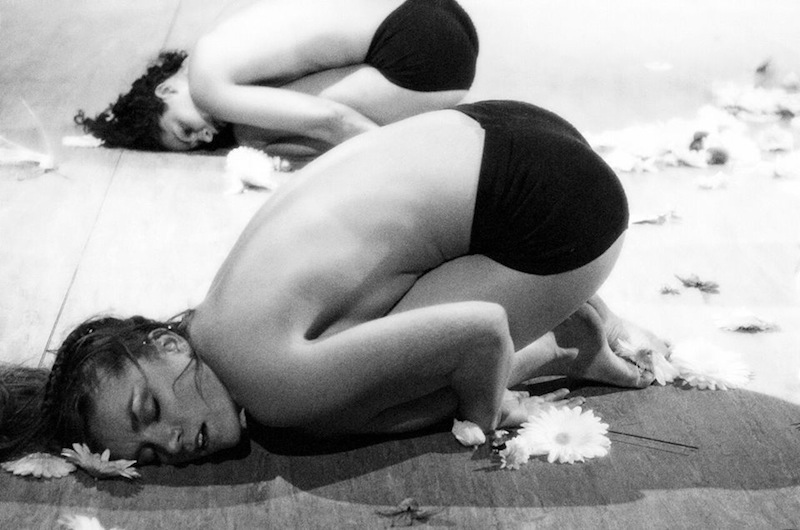 “Old age ain’t no place for sissies,” Bette Davis once said. No fun either for caregivers when elderly family members withdraw — whether to treasured memories or in abject despair.

For dancer/choreographer Marissa Alma Nick, her two grandmothers – Abuela Maria Gran Nick and Grandma Jean Teemer McCracken – were once vital, dynamic figures, but approaching their final days, while they remained physically accessible to their families, each in her own way suffered the ravages of dementia, and both died within six months in 2015. To honor these women and come to terms with their loss, Nick created two dance pieces, under the title Flowers for Spring, that movingly, but unmercifully, explore the inexorable decline of minds and bodies. These distinctive, challenging works have evolved during the past several years (from when both grandmothers were still alive) and even during recent weeks of rehearsal. Both will be presented in their stark beauty at the Miami-Dade Auditorium on Friday and Saturday.

The stage will be covered with thousands of yellow flower petals, but the performances will not be sugar coated. Abuela is a solo dance and intermingles Grandma María’s romantic recollections with painful, lucid confrontation with her current delirium and physical trauma. Originally staged in Pablo Cano’s Red Velvet Theater in Little Havana, Nick again utilizes Cano’s dashing puppet, Diego, as María’s imaginary dance partner, and the red rose that serves as both a token of love and focus of nervous energy. Singer Jahzel Dotel provides vocal accompaniment, while Cuban classic music and Polish Klezmer connect María to her distant past — and far distant past. In her youth, María fled Nazi-held Poland for Havana, where she lived during the 1940s and later fled to Miami. Her daughter, granddaughter and other family members cared for her first at home and then, by necessity, in a local nursing home.

Contrasting with the solo, for the second piece, Daydreaming with Jean, Nick embodies her divided persona among three dancers: Juliana Triviño, Sasha Caicedo and Camille Arroyo. Sarah Amores is their understudy and has her own performance during intermission.

All are lithe, flexible and strong women. One challenge for them, for Nick – and for audiences, is to recognize within these youthful dancers the aged, arthritic and traumatized old woman whose life has been shattered by the ravages of dementia and eventually by a fall and fracture.

Each dancer brings her own physicality and emotional states, teased out and refined by their teacher, choreographer and “mama” during hundreds of rehearsals. In one section, where all three are on the floor, Nick coached, “There’s something in the crawl that I want to get out of each of the three of you – to find like a very specific emotion that each of you are doing,” she said. “Instead of it just being, ‘You’re going to laugh and cry,’ we’re going to find an emotion, a memory that each of you will focus on remembering in the flower crawl.” Look for those.

The grandmothers’ unraveling is explored in chapters, representing chronological, physical and mental states that Nick has painstakingly and painfully choreographed as a dance theater production. Besides “pure” movement and posture, the drama unfolds with facial and gestural interaction – both among the performers and with the audience.

Chicagoan Hope Littwin has composed original music that alternately propels, buoys and threatens to overwhelm the dancers during a 60-minute performance that draws on their full capacities of physical endurance through isolated turbulence, mutual support and ultimate surrender. To push her charges without hurting them was a challenge. “That’s part of the performative aspect of this,” said Nick. “Actually seeing the body break down and get weary.”

Technical consultant Gary Lund, himself a veteran dancer, has brought clarity and emotional affinity to the production. His questions, commentaries and dozens of pages of handwritten notes taken during Nick’s coaching breaks attest to his commitment to bring finely tuned staging and lighting.

Modeling the weak, straining and stiff body and hands of Grandma Jean, Nick exhorted her dancers, “You have to put this part deep in your subconscious. You’re dancers; you’re used to standing up straight, especially whenever you’re on stage and you’re performing. It’s a presence that’s ingrained in us, so you have to be very mindful.”

Nick vividly recalls the vicissitudes of her grandmothers, as they would lose eye contact with visitors. “They’ve entered this dream-like state and so they’re remembering themselves younger for a moment. Cleansing themselves of what’s around them, what’s hurting them, what pains them – into feeling that [youth] for just a moment.”

In this dramatic presentation, she goes all out to honor and come to terms with the loss of beloved family members, while dispelling any illusions about our physical destiny. Equally important, she and her dancers generate deep empathy.