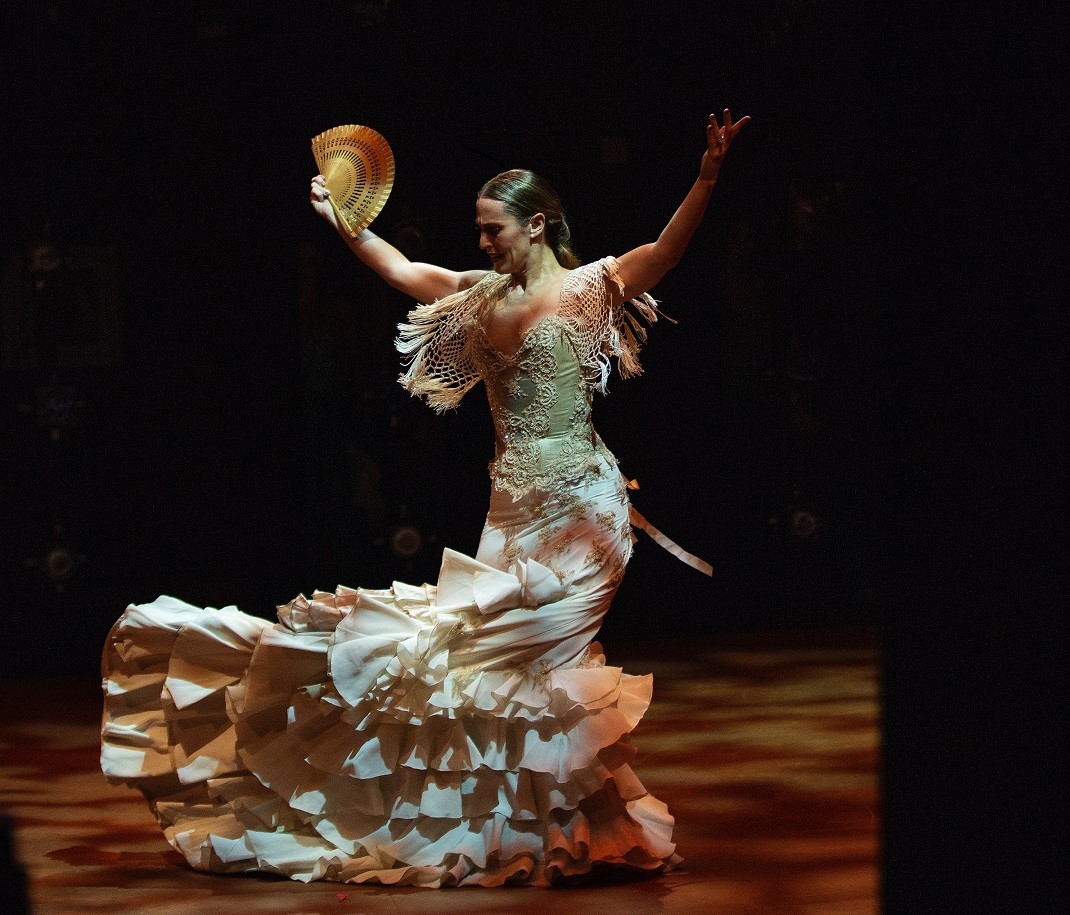 In the years since she arrived in Miami from her native Venezuela, flamenco dancer Siudy Garrido has built a loyal following. They showed up in droves to the Colony Theater last weekend for “Flamenco Íntimo,” selling out or very nearly selling out every performance.

Garrido clearly knows how to put on a show. For starters, she has the wherewithal to hire great musicians. Flamenco guitarist José Luis de la Paz was a renowned composer for dance in Spain before relocating to Miami, and percussionist Adolfo Herrera backed up De la Paz’s playing with a strong rhythmic foundation on cajón and djembe. Garrido brought in not one, but two excellent singers for the concerts, David “El Galli” from Spain and Ismael Pérez from New York, their beautifully paired voices lending the music a heft and richness seldom heard in locally produced performances.

Garrido’s troupe of eight enthusiastic young dancers, all women, are well trained, some having followed her to the United States from her Caracas studio. They are meticulously rehearsed: footwork crisp, lines clean, every angle of their arms in synch with the group. In an alegrías de Cádiz, they manipulated large embroidered silk shawls with grace and precision. When they were onstage with Garrido, they often receded into the background, but here, on their own, they were allowed to shine.

The musical pieces interwoven among the dances were outstanding, from the technical virtuosity of De la Paz’s delicate and meditative guitar solo to the sheer fun of percussionist Herrera’s sight—and sound—gags on the cajón. Eyes smiling beneath bright red glasses, it was a hoot to watch him pound out a rhythm with every part of his hands, and at one point to see him slide the heel of his loafer up the face of his instrument, bending the notes with the pressure of his shoe. Pérez’s and El Galli’s very different singing styles melded together magically when, each having sung a solo, they exited the stage together, their voices weaving and overlapping one another like the warp and woof of some mysterious ancestral fabric.

A highlight of the evening was the guajiras that Garrido danced as a solo with a bata de cola (dress with train) and fan, traditional accouterments for this Cuban-inspired rhythm whose lyrics take listeners on a morning stroll through 19th century Havana. Her cream-colored bata, with its tightly-laced corset top and big, merengue-like ruffles down the skirt, was every bit as delicious as a Lucila wedding cake.

Her arm work was sinuous as she bent deeply to the side, as if to reach for the cascade of ruffles around her ankles. Turning profile, dress wrapped around her torso, her back beautifully arched, she raised her arm in a long, slow curve that finished with defiant flick of the fan.

With her trademark rhinestone-covered heels, she beat out strong counter times to Herrera’s rock solid rhythmic base. As she raised her skirt for a footwork section, there beside her right knee a piece of bright turquoise kinesiology tape (the stuff your triathlete training neighbor plasters his calves with when he’s off for a run) peeked out from under her dress like a badge of honor. Moral: Anyone who pounds the floor for three nights in a row with as much force as she does gets to show off their physiotape whenever and wherever they want.

It isn’t the strength of her footwork, however, but rather her warmth as a performer that is Garrido’s most winning quality. In light-hearted numbers like the guajiras or the tangos con bulerías that finished the show, she moved across the stage with freedom and abandon, her generous and genuine smile radiating the pure joy that dance can and should bring, both to the performer and to the public.  As the curtain fell on Saturday night’s performance, the audience returned the favor with a heartfelt and enthusiastic standing ovation.