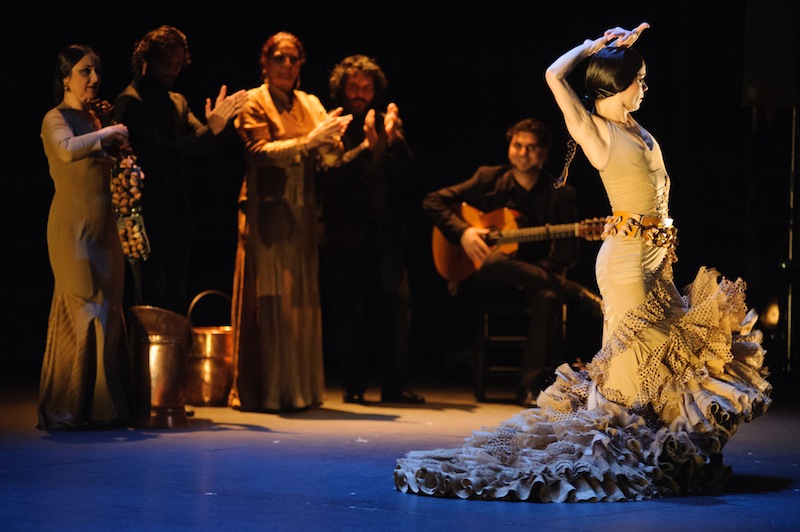 From singers like Joan Baez to poets like Maya Angelou to anonymous knitters of pink pussy hats, creative women have played an essential role in this country as agitators and activists. Likewise across the Atlantic, female flamenco performers have long raised their artistic voices in flamenco’s outcry against oppression, soundin a battle cry against social injustice, the pain of poverty and the sting of racism.

This week, these shouts of affirmation will be heard in Miami, as some of the most powerful women in flamenco today take center stage at the tenth annual Flamenco Festival Miami at the Adrienne Arsht Center.

Thursday and Friday’s “Stars of Flamenco” is dominated by female artists, with the exception of bailaor par excellence Jesús Carmona, 31, who also dances with his own company on Sunday. Saturday is given over to Olga Pericet’s Pisadas, which the choreographer describes as an ode to the universal feminine journey.

Each of the three women dancing in “Stars of Flamenco” represents a particular life stage and aesthetic. Carmona points to their “different generations, different concepts, different ways of seeing flamenco.” What unites Juana Amaya, 48, Pericet, 41, and Patricia Guerrero, 27, however, is a common thread of earthy authenticity and an interest in flamenco’s unique ability to express the power of women as a moral force throughout human history.

The matriarch of the group, Amaya’s roots run deep in the dirt of small-town Andalusia, where gypsy women like her face the double threat of both racism and sexism. But she is flamenco royalty, formed as a dancer in Morón de la Frontera, where her great uncle, Diego del Gastor, was the reigning master of the flamenco guitar. Dancers from Morón are known for the strength of their footwork as much as for their gutsy, unadorned style.

Critic Manuel Martín says that Amaya’s flamenco is “worthy of a Greek tragedy.” Like a Nina Simone recording, her dancing is both an acknowledgement of her race’s suffering and a physical manifestation of defiance.

Olga Pericet, only seven years Amaya’s junior, is considered in the flamenco milieu to belong to an entirely different generation. Just as your iPhone can be passé a year after purchase, so flamenco has developed at such a rapid pace that one sees stark differences in the styles of performers less than a decade apart.

Pericet left Andalusia for Madrid in her early twenties. There, she embraced the movers and shakers who were turning flamenco on its head, infusing it with a new energy that looked to contemporary dance and jazz for inspiration. She often shares the stage with three choreographers at the forefront of the flamenco vanguard: Marco Flores, Belén Maya and Manuel Liñán. Together, they tread a fine line, seeking to create a dance style that speaks to 21st century aesthetics and concerns whilst remaining faithful to the art form’s ancestral heritage.

Guerrero is the baby of “Stars of Flamenco,” but she has already caused a stir with the maturity of her artistic vision. Apart from her phenomenal technique, her choreography has been acclaimed for its dramatic integrity, with a theatrical intensity heightened by sophisticated lighting and sumptuous costuming.

The warp holding the evening’s intricate tapestry together will be provided by cantaora Rocío Márquez, 31. Compared to the rough and guttural sounds of some male singers, Márquez’s tone is limpid and clear. More of a reformer than a revolutionary, her knowledge of the classics provides a solid base for her own personal and unique style. In “Stars of Flamenco,” Carmona explains that Márquez’s singing weaves a bridge between numbers, “guiding us from one place to the next” and lending the piece its theatrical integrity.

If liberty, whether of lyric, line, or artistic style, is the watchword for all of these artists, it is especially so for Pericet. In Sunday’s full-length “Pisadas,” she often seems to channel flamenco’s great 20th century revolutionary, Carmen Amaya, a pivotal figure who flaunted conventional gender stereotypes as early as the 1930s, profoundly changing the art form.

Dressed in a form fitting pantsuit like the ones Amaya wore, Pericet hurls her entire body into steps, flings her mane of hair, and stares down her musicians in moments of complete connection. She says these onstage moments of unfettered abandon are like being in a trance. “It’s really a union that goes directly to the soul,” she says.

Pericet says that “Pisadas,” which traces the arc of celebrations and customs that bends through women’s lives, has a powerful message: “Women, in general, are very strong,” she says. “We are, by nature, savage, free and independent souls… A woman can decide her own destiny if she wishes. She can be free.”