FLA/FRA: A Camera, a Sunrise, a Meditation on French Culture 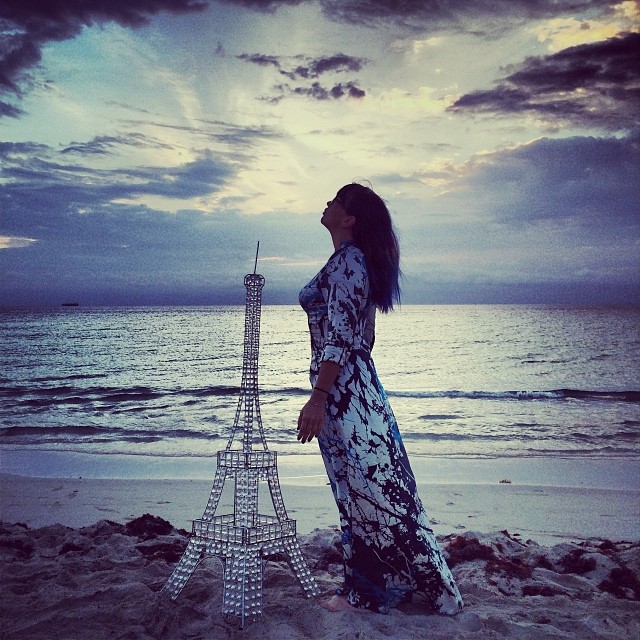 A great poet told us that “April is the cruelest month.” Tigertail Productions thinks otherwise, as it presents its FLA/FRA Festival, a month-long series of concerts, dance, film, and even some surprise cultural pop-ups, all of which celebrate French culture and joie de vivre.

For all the flurry, the festival starts out in a hush of morning light with a project entitled “Sunrise.” Miami choreographer Marissa Alma Nick is asking for volunteers to meet with her on the beach. Every morning in April she will film a volunteer watching a Miami sunrise.

Or actually, meditating on the beach at sunrise. Meditating on someone from French history or culture who was personally important to the volunteer. Since this year’s FLA/FRA fest is celebrating the culture not only of France but of all French speaking countries, a volunteer might be meditating on Haitian founding father Toussaint L’Ouverture, or French philosopher Jean Paul Sartre, or Senegalese filmmaker Ousmane Sembene, or anyone in between.

Volunteers can be of any age. The meditation lasts five minutes. Individuals or families can volunteer through email: info@tigertail.org. Use subject line: FLA/FRA Sunrise Volunteer.

There is no dress code. Volunteers can wear gowns or black-tie. They can also wear pajamas — whatever feels right, according to Nick. Shewill upload her films daily on YouTube “to share Miami’s sunrises with the world,” she explains. “After all, we are a coastal city. Miami’s sunrises are among the best things we have to share.”

Nick is perhaps best known in Miami for her site-specific choreographic work and dance. For this sunrise project, she wants to keep it simple. Her film shorts generally weave back and forth, between the sea and a face. If a meditator feels inclined to move, Nick will capture that as well. But in the past — this is the second year Tigertail is sponsoring Sunrise — the majority of the films chronicled stillness.  “All of us are always bustling around,” she says. “We forget about stillness.”

She goes on to describe many of last year’s images as “surprisingly raw.” To this writer’s eye, there in the stillness, each meditator seems to have an almost uncanny physical presence. Simultaneously the meditators seem full of longing. Perhaps the two qualities are closer than we realize.

Sometimes Marissa will include information on whom the mediator is thinking about as he/she faces the sea. Still, she prefers to keep words at a minimum. The images speak for themselves.

Does she have problems finding folks willing to wake up before dawn to come to the water before dawn? “Surprising not,” she says, “although getting up so early is far from easy for me. Those first four or five days, I have wondered what I have gotten myself into. Then it becomes unexpectedly energizing. And not just for me. All my meditators say that. Here we are in Miami, and it’s all too easy to miss the sunrise. I haven’t managed to get myself to one since the end of last year’s project. Now I am looking forward to 30 days, 30 different sunrises.”

There’s still room even if you’re camera shy. Early-risers are welcome to come to watch, or join in, out of sight of the camera. The ceremony will alternate days between 1) South Pointe Park, Washington Avenue, Miami Beach; and 2) Haulover Dog Park, 10800 Collins Ave., Miami Beach. A small Eiffel Tower will mark the spot; www.tigertail.org; email info@tigertail.org.